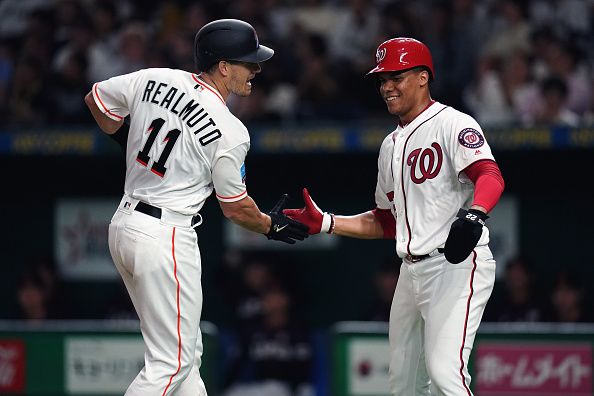 In an effort to shore up the trends within early average draft position, we will delve into the players’ valuations, along with targets in either varying tiers or after pick number 200 in future weeks. This week, a look at the subtle and not so subtle changes in NFBC ADP from the start of November until New Year’s Eve versus all the draft’s in January since through Wednesday evening.

It’s important to look within the numbers. For instance, Clayton Kershaw ’s average draft position fell from 32nd overall to 41st, but his actual number difference of 33.75 to 39.62 does not seem so foreboding. There are veterans gaining momentum due to a change of address or open avenue to playing time. In an effort to streamline, there’s charts for catchers, corner infielders by position, middle infielders by position, outfield with utility only options and pitchers. 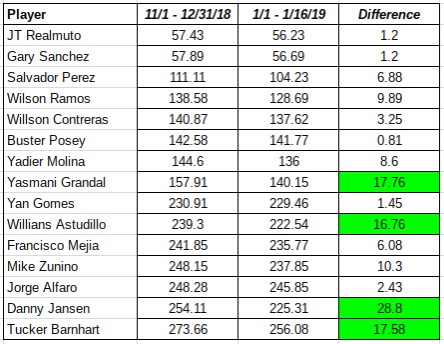 As more drafts ensue, catcher values will fluctuate. Since the start of the new year, catcher’s average draft spots trend up. It’s a clear two-man tier with J.T. Realmuto and Gary Sánchez . Once again, Yasmani Grandal seems undervalued, even with the higher number in the second sample. This year’s helium candidate seems to Willians Astudillo. He’s a contact machine, lovable due to his build and gaining momentum. However, it feels like deja vu with Austin Barnes being drafted over Grandal last year.

With the trade of Russell Martin to the Dodgers, Danny Jansen ’s stock shot up. Owning a clear path to playing time at a barren position will impact value. Relying on his overall ADP will be mistake as the year progresses.

First and Third Base

While Paul Goldschmidt and Freddie Freeman battle out who will be the first one off the board at their position, Anthony Rizzo continues to present himself as a bargain. Do not ignore his second half rebound. He and the Cubs should see some positive migration to the mean. Some might be scared off from Jesus Aguilar , as long as one adjusts expectations, he’s reasonably priced.

Recency bias of José Abreu ’s depressing his draft position, making for an intriguing buy. At a time when stolen bases go above market value, Ian Desmond also seems to be flying below the radar. He will not own first base eligibility next year, but in redraft leagues, it’s not a factor. Personally, prefer Matt Olson in the tier with Max Muncy and Joey Gallo . No player could be a bigger wild card than Miguel Cabrera . Health will be an issue, but at his price, he will not be a bust but could win leagues if he produces.

Things seem more settled at third base, but keep tabs on the elbow scope and how it affects recovery with Alex Bregman . No initial impact upon his draft position, but as spring training approaches, this could change. It seemed like Matt Chapman would be an upside target based on his strong finish last year, but he did have shoulder surgery in December. It’s being reported as a minor procedure, but it could sap his power in the first half.

Second Base and Shortstop

As settled as the corners seem to be, much more volatility occurs in the new year in the middle infield. At second base, Scooter Gennett ’s stock points upwards while Dee Gordon ’s down over 10 draft spots. Taking one trick ponies does not prove beneficial, but if Gordon continues to drift, he will eventually be a bargain, if he’s not already.

No player has gained more spots than Daniel Murphy ’s 63 since January. Moving to Colorado and being a fly ball hitter only engenders his appeal. One year further from his microfracture surgery, if targeting him, it’s now going to require a top-80 pick, which given his batting average insulation along with adding first base eligibility, it’s still too cheap. No one seems to want veterans, but Robinson Canó and Jonathan Schoop benefit from new homes and clear paths to at-bats. It’s reflected in their recent surge in ADP as well. Do not ignore Brian Dozier either, there’s plenty of value to mined at second base.

Shifting to shortstop, Corey Seager ’s the big winner in average draft position in the comparative charts. Both Tim Anderson and Amed Rosario dropped over 11 spots. It can be attributed to their plate discipline with owners looking to protect average. However, each provides stolen bases, so their numbers could continue to fluctuate. With the playing time picture clouded in Colorado, the Garrett Hampson hype machine faded recently. Take note.

Outfield really translates well into a tiered approach. In the first round, the studs will be taken early with new additions to the fray in J.D. Martínez , Christian Yelich and Ronald Acuna . Depending on how one likes to build a roster, each makes an interesting choice, but which one owns the best chance of repeating last year’s numbers? Where Bryce Harper signs could affect his ADP, so here’s hoping it’s to a plus hitter’s park.

As a Charlie Blackmon backer, this year will be tough since Yasiel Puig ’s so similar, moving to Cincinnati and could produce similar production at a bargain. Since the start of January, Puig’s flying up draft boards with a 93.69 average draft position compared to 125.34 in November and December. If looking to get Puig, the price will continue to escalate.

It’s intriguing to see Nick Castellanos price increase while Victor Robles declines in the two samples. Home runs will be available later in the draft, stolen bases will be scarce. Gun to my head, taking Robles in the tier and not looking back. Or play it safer and grab Mitch Haniger . To each his own.

There’s 22 starting pitchers being taken in the top-100, so innings scarcity seems to be making waves in the market. Taking it one step further, 14 starters fly off the board within the first 40 selections in NFBC drafts since the start of January. One could go against the grain, but it’s gets more difficult to cobble together a strong staff if waiting. But, draft to your strengths.

How to handle Clayton Kershaw and Madison Bumgarner will provide tough questions going forward. They could be perceived bargains due to name value, but right now, going to pass on both in redraft formats. Let someone else incur the risk. Like Miguel Cabrera , the polarizing player for pitchers will be Stephen Strasburg . Can he overcome workload and toughness concerns to be an ace or will he succumb to another trip or two to the disabled list? 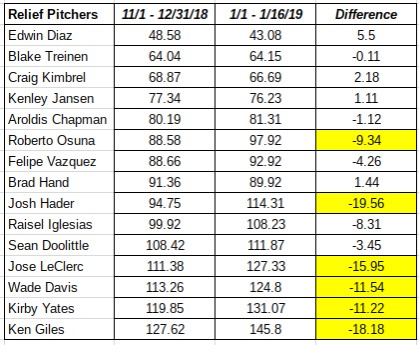 Josh Hader changed the game being an impact reliever protecting ratios with strikeout upside without relying on saves for profit. However, paying full retail for a repeat will be much tougher to do at his present average draft position. With so many fantasy players trying to find a reliable source of saves, it’s curious to see all the yellow markings denoting a depressed draft position.

Volatility comes with the territory, navigating the waters and hitting the right targets could be pivotal to success in the year ahead. Stay tuned. One player who will see a huge uptick in price, Cody Allen who just signed to close for the Angels. Like real estate, location could be a conduit to opportunity for saves. Much more to come on this topic as the season approaches.

Many more changes will be on the horizon, so be sure to keep Fantasy Alarm saved in your browser. Also, please get out living draft guide for more player profiles and articles like this to keep you ahead of the competition.