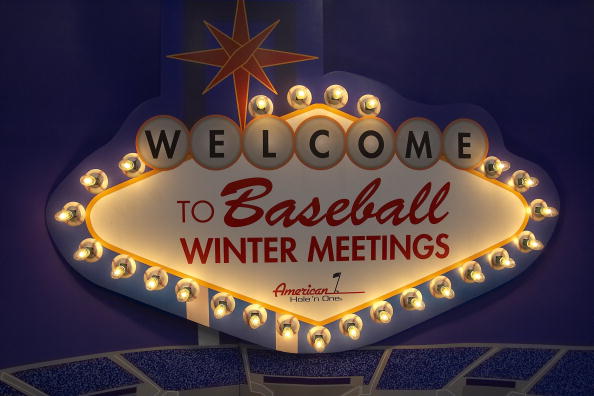 Talk about motivated, Jerry DiPoto finished this trade from the hospital. Given all the moving parts of this trade, it’s easier to focus on Carlos Santana heads to Cleveland from Seattle and the Indians also receive Jake Bauers from Tampa Bay. Seattle gets Edwin Encarnación while the Yandy Diaz . Cole Sulser and a player to be named later. Having never sold his house, Carlos Santana returns to Cleveland and will not need much adjusting. Bauers may see time at first base or deployed as a corner outfielder, but owns a clear path to at-bats in this deal. Everyone should place their bets on where the Mariners deal Encarnacion, suffice it to say, doubt he opens 2019 in Seattle. Last, the Rays gambling on Diaz to become their everyday third baseman and address a need by getting a right-handed bat.

For the second time this off-season, Carlos Santana ’s been traded. First from Philadelphia to Seattle and now back home to Cleveland. Santana accrued 560 at-bats last season with 82 runs, 24 home runs, 86 RBI, two stolen bases and a disappointing .229/.352/.414 slash line. But, he finished as one of four qualified hitters to walk more than he struck out in 2018.

While the 34 home runs Santana hit in 2016 appear to be an outlier, he’s still a steady producer in the category. His BABIP collapse to .231 fueled his average to crater but Santana’s isolated power stuck. Over the last three seasons, Santana’s hit a solid but not spectacular .249/.360/.457 with 81 home runs and 252 RBI.

When trying to predict his 2019, it’s open to interpretation. But, Santana’s career 33 percent hard hit rate and 13.6 home run per fly ball percentage seem like strong starting points. Using his expected statistics from last season, Santana deserved a better outcome. His expected home run total of 23.4 aligns directly but not his .261/.384/.463 expected slash line. Perhaps a return to the American League will help his numbers bounce back.

Prior to the trade, Steamer projected Santana to score 77 runs with 24 home runs, 74 RBI, three stolen bases and a .242/.359/.446 line. Given his plate discipline and familiarity with his surroundings, Santana’s a likely bounce back player for the upcoming season.

Adding Jake Bauers seems intriguing. Like Santana, he carries strong on-base abilities with a career .361 on-base percentage in 606 games in the minors. Although Bauers struggled at the plate with a .201/.316/.384 line in 96 games with the Rays, he did rack up 11 home runs and six stolen bases.

If factoring in his Triple-A counting statistics with the majors, Bauers racked up 16 home runs and 16 stolen bases last season. He also pulled the ball 51 percent of the time with a 40.5 hard hit percentage resulting in a .183 isolated power. Using Baseball Savant, here’s his major league line drives and fly balls with his new park in Cleveland as the background: 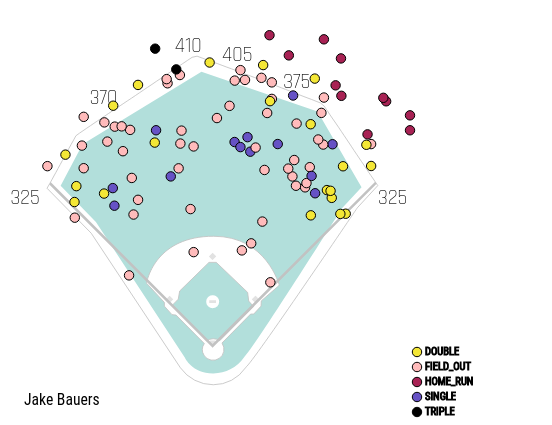 It remains to be seen how much Bauers will benefit from his new surroundings, but xSTATS suggested his line from last year could have been .212/.325/.377 with an expected on-base average of .308 and 10.9 expected home runs. There’s room for growth with Bauers as he slots in as one of the Indians corner outfielders but will retain first base and corner infield eligibility in 2019. For teams looking to garner stolen bases from non-traditional positions, targeting Bauers as a late round corner could be a savvy move. But, he will need to move his batting average to the .240 range or higher for owners to profit.

Pictures of Yandy Diaz surfaced on Twitter shortly after the trade and the dude’s jacked. Whether or not his frame translates to power in the major leagues remains to be seen. Diaz will be provided the opportunity to start at third base with the Rays. In 39 games with Cleveland last season, he did hit .312/.375/.422 with 15 runs, one home run and 15 RBI. In 282 games at Triple-A, Diaz hit a combined .319/.415/.432 with a 14.3 walk percentage while striking out 16.7 percent of the time. Within his 1,235 plate appearances at this level, he hit 15 home runs.

Despite owning plate discipline, Diaz has yet to focus on power. He hits too many ground balls and his approach yields many fly balls to center and the opposite field. Here’s his spray chart from Triple-A last season but keep in mind he hits right-handed: 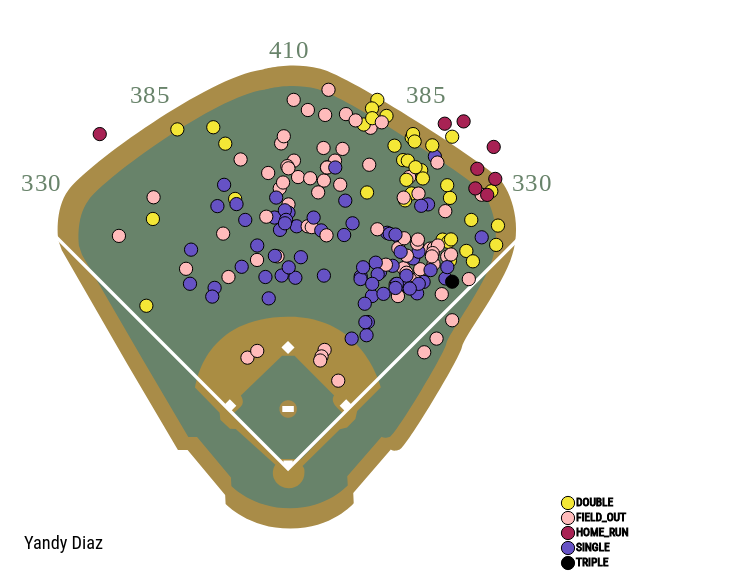 This particular site will not allow for the Rays home stadium to be the backdrop, but this sample seems small since he finished with a 52 percent ground ball rate in the data above. In an effort to see a larger sample, here’s all of his line drives and fly balls from the last three years at Triple-A courtesy of MLBfarm.com: 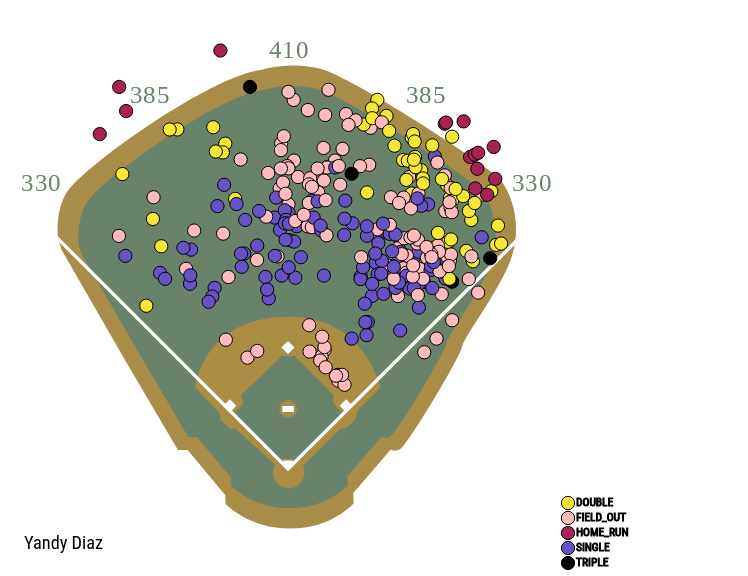 It’s important to remember Diaz will enter the season at 27 years old. He could tweak his swing to generate more fly balls, but a sudden burst of power seems unlikely. However, Diaz does possess plate discipline and does own a .283/.361/.366 slash in 88 career major league games. Keep in mind, it will be easier to forecast him hitting .275 or better in 2019 than suggesting he hits at least 10 home runs.

Also, with Jake Bauers gone, it could pave the way for Nathaniel Lowe to make the team during the spring. Across three levels last season, Lowe appeared in 130 games with a combined 93 runs, 27 home runs, 102 RBI, one stolen base and a robust .330/.416/.568 slash line. He did struggle in terms of average when reaching Triple-A and could require a little seasoning, but ignoring Lowe in deeper formats on the heels of this trade would be a mistake.

Edwin Encarnación to Seattle, for now…

Heading to a team in a retool phase, will Edwin Encarnación actually suit up for the Mariners? For now, it’s just easier to remind fantasy owners about a boring veteran who produced 32 home runs and 107 RBI last season with a .246/.336/.474 slash in 137 games. While upside does not exist with Encarnacion, his steady production can be overlooked in drafts.

Over the last three years, Encarnacion’s accrued 1,655 at-bats with 269 runs, 112 home runs, 341 RBI, seven stolen bases and a .256/.357/.504 slash. In 2018, he recorded a career best 42.4 hard hit percentage but his isolated power and slugging percentage declined. xSTATS suggests Encarnacion should have slashed .256/.345/.485, much more in line with his three year numbers, with 29.4 expected home runs. Where Encarnacion ends up could determine his overall value for 2019, but enjoy his depressed draft cost while he still maintains first base eligibility for fantasy.

Be sure to stay with Fantasy Alarm as the draft guide nears its debut and the Hot Stove continues to heat up.