Fantasy Baseball Daily Round Up: September 24

Greg Jewett goes around the league, giving a daily state of the union for the world of fantasy baseball and where most playoff chases are at right now. He outlines current storylines and gives insight on what to watch for going forward. 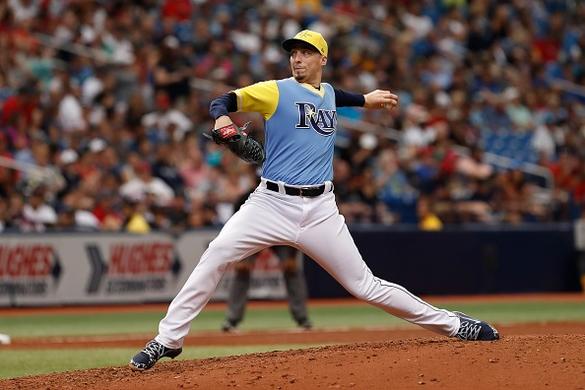 Serving as an almost complete contrast to the Rays innovative “opener” strategy, Blake Snell won a franchise record 21st game on Sunday during 6.2 shutout innings. Snell struck out 11 batters generating 24 swinging strikes of his 100 pitches with 18 called. He’s won each of his last nine starts with a minuscule 1.03 ERA while striking out 74 in 52.2 innings. During his 30 starts this season, Snell’s only allowed more than three runs in three of them and has limited opponents to one run or less in 20 outings. With this win, Snell lowered his American League leading ERA to 1.90 and will try to finish strong in his last start against theses same Blue Jays at home this coming weekend.

Last home weekends can create what many call cutting onions, or an overflow of emotions. Here’s a look at two endings in such games along with trying to guess if a Texas Ranger will return for one more year.

Victor Martínez said goodbye in Detroit announcing his retirement and his team paid tribute on Saturday:

And this ballgame is ovah.#TipOfTheCap, Hawk, on one great career. pic.twitter.com/ewCvCPeMKY

If Beltre does decide to retire this offseason, Texas did not want to miss a chance to honor him in their last home game on Sunday:

In possibly his last home game, Adrián Beltré gets a standing ovation from the @Rangers faithful. pic.twitter.com/k7fEYbAxSb 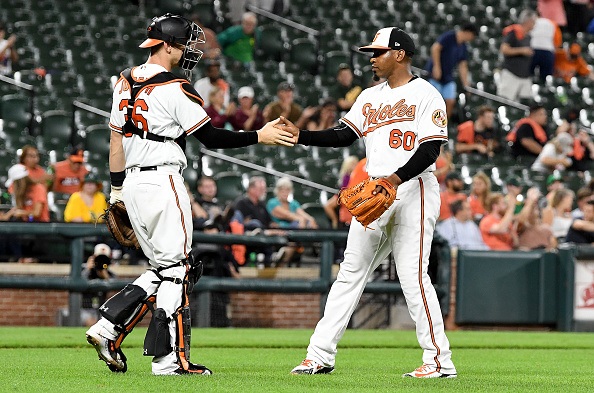 Closing out a win in New York, Mychal Givens recorded his fourth straight scoreless outings and has not given up a run in eight of his last nine appearances. Through 11.2 innings in September, Givens has yielded only two hits, three runs and three walks with seven strikeouts good for a 2.30 ERA along with an impressive 0.43 WHIP. With a rebuild looming, Givens could open 2019 as the teams closer.

In a postseason tuneup, J.A. Happ allowed one run on five hits over five innings with seven strikeouts. Miguel Andujar went 2-for-4 with his 43rd double and an RBI. The Yankees rookie record for doubles in a season dates back to 1936 by Joe DiMaggio when he hit 44 in 668 plate appearances. Andujar sits within one in 527 plate appearances. Bad news for Didi Gregorius owners, he may miss the rest of the regular season due to a wrist injury suffered when sliding into home on Saturday. For fantasy, it would be best to sit him this week.

Strong outing by Trevor Richards winning his fourth game of the year during seven shutout innings giving up three hits and a walk with nine strikeouts. He produced 19 swinging strikes of his 95 pitches on Sunday against Cincinnati.

Whit Merrifield extended his hit streak to 14 games and remains tied for the second half lead in stolen bases with 21 with his teammate. Adalberto Mondesí did not steal a base, but has joined Merrifield in the go-go Royals since the break. On Sunday, Mondesi hit his 12th home run of the season and sixth in his last 15 games during which he’s slashing .333/.348/.652 with 11 runs and 12 RBI.

Padding his growing MVP resume, Christian Yelich launched his 32nd home run while going 2-for-3 driving in three along with his 21st stolen base en route to a smash and dash. Over his last 67 games, Yelich carries a .362 average with 21 home runs and 61 RBI. Travis Shaw (31) and Mike Moustakas (28) also homered in the Brewers win.

Pittsburgh’s Starling Marte left Sunday’s game early with a left calf injury. His status the rest of the season could be in doubt, especially given leg injuries for speedy players. Adam Frazier hit a pinch hit home run. Since his recall in July, Frazier’s hitting .335 with 18 doubles, seven home runs and 27 RBI in 49 contests.

Shrouded by the pitching rotation, the Mets offense continues to produce since the All-Star break. Amed Rosario tallied two more hits with an RBI, a walk and stole his 22nd base. He’s swiped 16 since the break, hitting .319 this month with 16 runs, five doubles, two triples, two home runs and seven RBI. Jeff McNeil keeps hitting with four more hits on Sunday and owns 68 hits over his first 57 games. He also stole his sixth base and raised his average to .340 since his promotion on July 24th. Michael Conforto drove in three runs on two hits and has 16 home runs with 50 RBI in the second half.

With Adam Eaton nursing a knee injury, Victor Robles could play the rest of the season in an audition for next year. He hit a triple and home run on Sunday scoring two runs with three RBI. Robles has hit safely in his last four starts. Trea Turner ’s heating up as the season winds down. He’s in the midst of a 23 game on-base streak, reached base in all five plate appearances on Sunday while scoring his 100th run and stealing his 42nd base.

Moved back to face Atlanta twice in the final week of the season, Aaron Nola pitched well giving up two earned runs on four hits and a walk with six strikeouts in six innings on the road. He did not receive much run support and fell to 16-6 as a result. Do not ignore his breakout this year.

As for the Braves, they did not put out their best lineup as they auditioned players fighting for postseason rosters, however, do note this tweet:

Peaking at the right time, Kyle Hendricks yielded only one run on four hits with five strikeouts. Over his last seven starts, Hendricks owns a 1.55 ERA with a 36:6 K:BB and 0.91 WHIP in 46.1 innings. Ben Zobrist tallied three more hits and moved into a tie for third in the National League with a .314 batting average. Kyle Schwarber reached base all four plate appearances and hit his 26th home run driving in two.

Houston’s Charlie Morton left his start after only an inning. Reports suggest he will make one more start before the end of the season, but monitor this closely. Framber Valdez filled in affably pitching six innings giving up three hits, one earned run and two walks with nine strikeouts. He’s the youngest pitcher to strikeout nine in a relief appearance since Johan Santana in 2002. Valdez recorded 14 swinging strikes of his 95 pitches on Sunday as well. Yulieski Gurriel will not want to see the Angels leave town. Gurriel’s on a nine-game hit streak and hit three home runs in three games this weekend driving in 10 runs.

Although Miles Mikolas sits on the periphery of the National League Cy Young race, he won his 17th game of 2018 allowing only two hits and two runs with eight strikeouts in seven innings. Matt Carpenter hit his first home run of the month, and 36th of the season. Unfortunately, he’s hitting .176 in September.

Kyle Gibson prevented Oakland from clinching a playoff spot with his ninth win giving up one earned run in 7.1 innings. Trevor May stepped up for his first career save walking one and striking out two in 1.1 innings. With Trevor Hildenberger struggling of late, May could get another chance or two before the season expires.

It’s easy to overlook Kyle Freeland ’s 16 wins and 2.84 ERA but he’s been terrific this year. He won a must win game for his team on the road to stay in the playoff chase turning in his 10th straight quality start and winning his seventh straight decision. During this stretch, Freeland owns a 2.17 ERA. Wade Davis notched his 41st save, has been scoreless his last five and only allowed one run over his last 16 outings on six hits, two walks while striking out 21 (0.56 ERA, 0.50 WHIP).

Hyun-Jin Ryu fired six shutout innings striking out eight and gave up only four hits. He’s one of six pitchers with an ERA below two with at least 75 innings pitched this year. Manny Machado hit his 37th home run while driving in two. He’s homered in back-to-back games with five RBI in them.

There were not too many holes in Mookie Betts game entering this season, but as beat writer Alex Speier noted, he entered the year with only two home runs to the opposite field. Last night, he hit his fourth of 2018 on this swing:

Betts not only hit his 31st home run, but he racked up three extra-base hits in a game for the 17th time, a major league record for players yet to turn 26 years old dating back to 1900. Regression may not be on the table for Betts and he only needs two steals to reach a 30/30 season for the first time in his career. 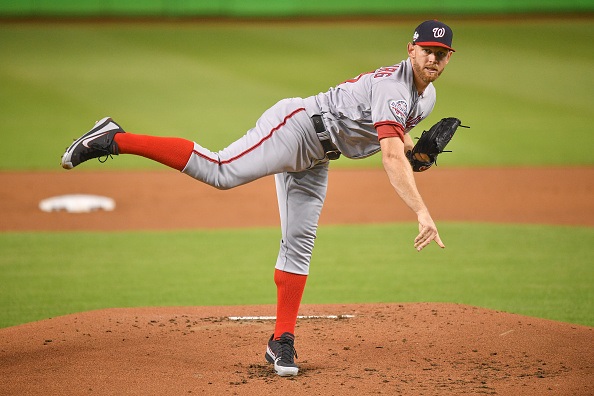 An intriguing matchup in Washington with Sandy Alcantara facing Stephen Strasburg . Each pitcher has been hot this month.

Dallas Keuchel and Corey Kluber will get work in leading up to the playoffs but may not work deep into their respective starts.

New York will deploy its bullpen in Tampa Bay with the opener strategy catching on.

Cole Hamels will try to keep the Cubs ahead of the Brewers with Milwaukee also going with a bullpen game skipping Chase Anderson in the heat of the pennant race.

Clayton Kershaw will start in Arizona against Robbie Ray in an interesting battle between very different southpaws.

Be sure to check back this week if fighting for a championship to stay ahead of the competition. Congrats to all of the Fantasy Alarm family who won their head-to-head leagues.