Fantasy Baseball Daily Round Up: August 30 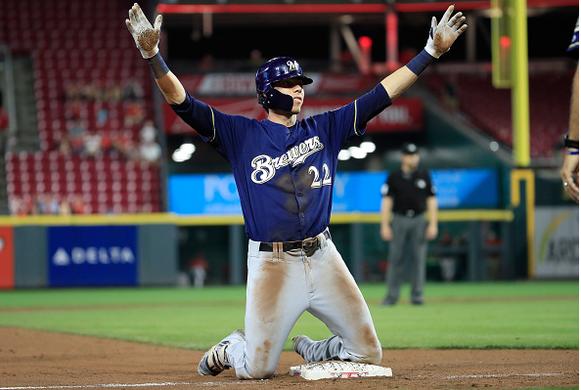 No game better depicted the looming playoff races better than the Brewers and Reds 13-12 game last night. In it, Christian Yelich racked up six hits, recorded the second cycle of 2018 and hit his 26th home run in the process. Yelich becomes the first Brewer with six hits in a game since Jean Segura in 2013 and the first player to get six hits during a cycle since Ian Kinsler in 2009. Over the last 45 games, Yelich has hit .371 propelling him atop the National League in batting average (.319) with 15 home runs and 40 RBI in this stretch. Firmly throwing his hat into the MVP conversation, it’s going to be a wild September with so many teams fighting postseason.

Albert Pujols will miss the remainder of the season due to surgery. He will undergo a left knee debridement which requires a six-to-eight week recovery. With over $90 million dollars remaining on his contract through 2021, what will the Angels get?

Plan on a platoon with Jefry Marte and Jose Fernandez to replace Pujols when rosters expand on Saturday.

HIt by a comebacker, David Price left his start early but X-rays were negative on his wrist. Boston breathes a collective sigh of relief.

Jean Segura left his game early after fouling a ball off of his foot. So far, he’s day-to-day but track his progress.

Lucas Duda was traded to Atlanta in a waivers transaction to bolster their bench for the stretch run.

Houston placed Charlie Morton (shoulder fatigue) on the 10-day disabled list to provide him rest. He will miss one turn in the rotation. Plan accordingly.

Cleveland placed Andrew Miller on the disabled list with an impingement in his shoulder. It’s looking like a lost season for Miller who cannot stay healthy.

The Dodgers, looking to bolster its beleaguered bullpen, placed a waiver claim on Ryan Madson . They have until Friday afternoon to consummate a deal.

Tyler White continues to mash and keep Evan Gattis on the bench. White hit his 10th home run, a walkoff winner. He’s launched eight home runs in the second half with 22 RBI and a .345 average in 24 games for Houston.

Two under the radar players did well in Kansas City. Adalberto Mondesí homered for the second straight game and drove in four. He’s six for his last 11 in three games with five runs scored. Plus, he’s stolen 17 bases in only 48 games this year. Mikie Mahtook drove in both runs for the Tigers and hit his fifth home run. He’s in the midst of a 14-game on-base streak during which Mahtook’s hitting .293/.431/.659 with all five of his homers and 11 RBI.

Both Amed Rosario and Todd Frazier stayed hot for the Mets. Rosario tallied two more hits, has scored 16 runs his last 20 games and stolen 10 bases in the second half. Frazier hit a grand slam and homered for the fourth time in his last seven games. He’s hit six home runs with 20 RBI in his last 22 contests.

Joey Lucchesi struck out nine in six innings giving up one earned run and two walks. He’s now 4-0 when reaching six innings in a start with a 1.20 ERA in these outings.

Cleveland’s dynamic duo, Francisco Lindor and José Ramírez , became the first switch hitting teammates to each record at least 20 home runs and 20 stolen bases in a season. Lindor swiped his 20th base in a loss last night but the two will be on track as first round picks in 2019 drafts. Lindor’s scored 109 runs in 130 games with 29 home runs and 20 steals. Ramirez has launched 37 home runs with 94 RBI and 28 stolen bases.

Eugenio Suárez became only the fourth third baseman to record 30 or more home runs for the Reds. Suarez crushed his 30th off of Josh Hader last night and continues to be underrated by the fantasy community.

While the focus remains on trying to figure out who gets the next save for the Phillies, Carlos Santana becomes the fourth player to reach 20 home runs this year on the team. Santana hit his first grand slam since September of 2015 in the process.

Two more under the radar players showed their worth in Atlanta. Joey Wendle recorded his fourth straight multiple hit game and stole two bases with two RBI. He’s 12 for his last 36 with six runs, a home run, seven RBI and four stolen bases. Johan Camargo smacked a three run home run, his 14th of the season. During the second half, Camargo’s hitting .310/.355/.500 with 18 runs, five home runs and 24 RBI.

Trevor Williams blanked the Cardinals for six innings giving up three hits and three walks with eight strikeouts. He’s only allowed four runs over his last eight starts for a minuscule 0.75 ERA in them. Felipe Vázquez notched his 28th save, and 18th in a row to preserve the shutout.

Zach Godley won his career best 14th yielding two hits, one earned run and one walk with six strikeouts in 7.2 innings in San Francisco. It’s been an up and down year for Godley, but he seems to be peaking at the right time for his owners. 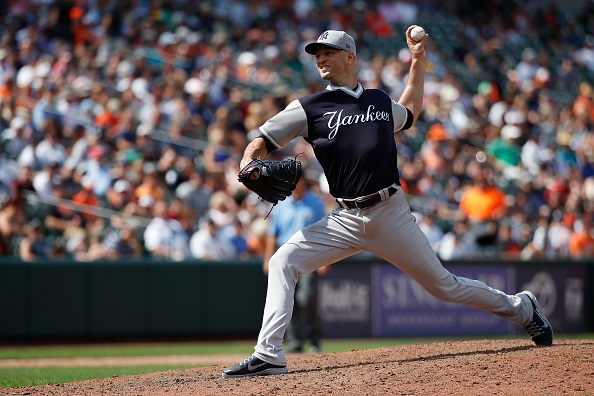 Cincinnati will try its hand with an opener as Cody Reed will oppose Wade Miley this afternoon. Not sure overexposing this bullpen will be a terrific idea.

J.A. Happ will look for his sixth straight win with the Yankees as they welcome the Tigers to New York.

Mike Montgomery will rejoin the Cubs rotation and face Mike Foltynewicz on the road.

Can Lucas Giolito stay hot versus the Red Sox? Not so sure.

Two southpaws will face off with Robbie Ray matching up with Rich Hill in Los Angeles in a big four game set. Going with the veteran here but if it comes down to the bullpen, advantage could lie with Arizona.

KBO Round Up: May 31
Greg Jewett
Published Yesterday 10:00 am (EST)
Fantasy Alarm

A. Reyes - SP
TEX
Rangers released RHP Arturo Reyes.
Austin Bibens-Dirkx, Brandon Mann, Taylor Jungmann, and Eric Jenkins were among the other 37 total minor league players that the Rangers have cut loose. As noted by Jeff Wilson of the Fort Worth Star-Telegram, most of these cuts would have happened at the end of spring training or after the postponed June MLB Draft. Still, it's been a tough week for baseball with all these transactions coming in the same short period.
Added 3:23 pm (EST)
Added 3:23 pm (EST)

L. Sardiñas - 2B
WSH
Nationals released INF Luis Sardinas.
He's one of 40 minor league players who were released by the club. Sardinas, 27, spent last season between the Nationals' Double- and Triple-A affiliates. He last appeared in the majors in 2018 as a member of the Orioles.
Added 1:29 pm (EST)
Added 1:29 pm (EST)

G. Canning - SP
LAA
Griffin Canning (elbow) has thrown three live batting practice sessions at Angel Stadium and is up to about 55 pitches.
Canning didn't pitch any during Cactus League play due to an ulnar collateral ligament issue, but he resumed throwing off a mound earlier this month. Whether he will be ready to pitch by early July when/if the season begins isn't known at this point.
Added Yesterday 2:46 pm (EST)
Added Yesterday 2:46 pm (EST)