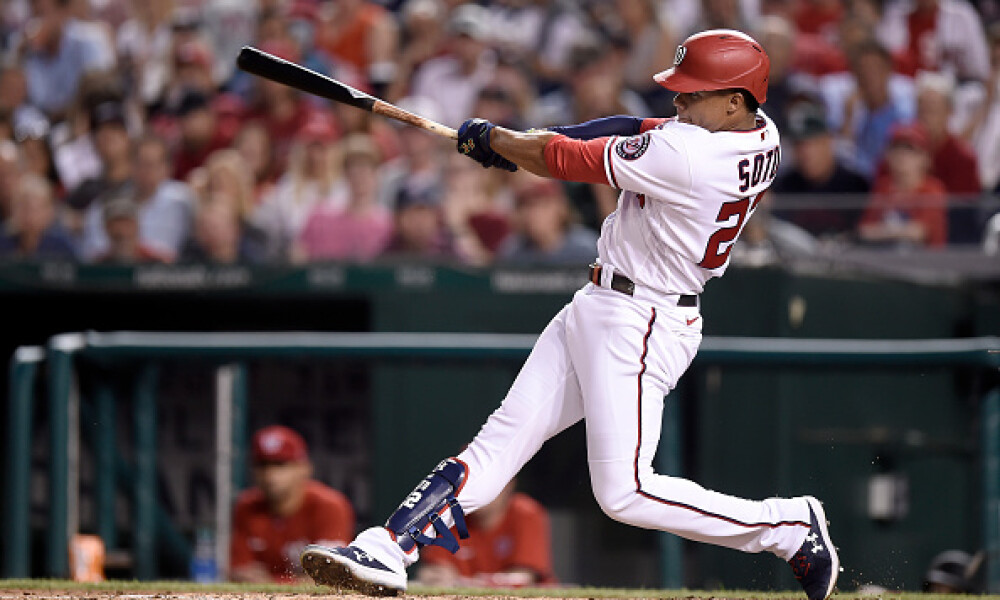 Stay hot young Soto. He entered the All-Star break on a heater and he's picked right up where he left off hitting .522/.621/1.261 with eight runs, five home runs, 12 RBI and two stolen bases in six games starting the second half over 29 plate appearances. He's drawn six walks against three strikeouts in this sample with a robust .739 isolated power, .731 wOBA and ridiculous 364 weighted runs created plus (wRC+) metric. Of his 20 batted ball events, he's produced five barrels (25 percent) and 14 hard hits (exit velocity of 95 MPH-plus) for a hard hit rate of 70 since the onset of the second half. Pretty, pretty, pretty good. Did the Home Run Derby awaken his power?

Starting the second half strong, Anderson's notched a .346/.370/.846 slash with seven runs, three home runs, four RBI and two stolen bases in 27 plate appearances in six contests. His .500 isolated power and .500 wOBA fuel his 225 wRC+ atop the White Sox lineup. He will be tested this weekend facing the vaunted Brewers triumvirate (Brandon Woodruff (R), Corbin Burnes (R) and Freddy Peralta (R)). A preview of the Fall Classic? Stay tuned.

After multiple appearances in the migration to the mean category in this weekly column, Freeman's finally breaking out. He produced a .478/.536/.870 slash so far in the second half over seven games and 28 plate appearances with nine runs, three home runs, five RBI plus two stolen bases. With his plate discipline on point, he's struck out once in this time frame versus drawing four walks plus:

Armed with a .391 isolated power, .568 wOBA and 259 wRC+ in the second half, could he carry Atlanta back into contention in the National League East playing for a new contract?

Deciding on if he's a sunk investment at the onset of the second half seems preemptive, but Bellinger's definitely on notice. Through his first seven games in the second half he owns a paltry .038/.167/.038 slash line with three runs and two RBI in 30 plate appearances. This equates to a .122 wOBA and negative 25 wRC+ for the former All-Star. Noting expected statistics from Baseball Savant heavily weigh quality of contact, his .197 xBA and .315 xSLG need to be factored in whether to bench or use him in fantasy going forward.

A past appearance in the hot streak column now sees him on the cold list. Less than optimal in a walk year in free agency. Correa's recorded a .048/.091/.048 slash his last six games in 22 plate appearances with a 45.5 strikeout rate in them. Add in his .088 wOBA and negative 49 wRC+ to this sample and one would be better served sitting him in fantasy until he shows signs of a rebound. Maybe the Rangers pitching staff does this over the weekend.

From the life comes at you fast department, Gallo headlined the hot list last week after finishing the first half on a power surge. But, his first seven games in the second half resulted in a .091/.167/.182 slash with three runs in 24 plate appearances and no home runs. He's cratered with a strikeout percentage of 50 and a .162 wOBA. Normally an on-base stud even in a slump, better days lie ahead. Perhaps a fusion of Home Run Derby hangover along with the trade deadline weighed down his production after the break. Stay tuned to where he may end up, since a new ballpark and spot in a lineup may awaken him from his slumber.

Migration To The Mean

Totally whiffed on Dozier this season but he played through injury issues and may finally be healthy as the second half resumes. He's off to a hot start slashing .500/.591/.611 his first 22 plate appearances with the same amount of walks (three) as strikeouts in them. Fantasy players would appreciate more power than two doubles in his last nine hits but any signs of life would be welcomed:

There's two things at play here. First, Bell's starting to produce power numbers with the Nationals schedule one of the weakest until the end of the season. Second, he's been taking fly balls attempting to learn left field which would enhance his eligibility if he starts playing games at a new position. Over his last six games he's launched two home runs with an enticing .286 isolated power and .571 slugging rate. Could be a very intriguing buy low:

It's been a lost season for Soler but he showed a pulse hitting home runs in back-to-back games in Milwaukee. He benefited from a soft schedule facing their two southpaws rather than the big three right-handers in their rotation, but his expected numbers suggest some hope going forward. Of course, with the two home runs comes a .188 average his last five contests spanning 18 plate appearances but those mining for cheap power on the waiver wire can focus on the .375 isolated power in this sample along with the .351 wOBA and hope he continues positive regression towards his expected numbers below: