Teams are solidifying their rosters at Spring Training comes to a close. Ray touches on Alvarez, Brantley, Franco, Grichuk, Longoria and Rendon. 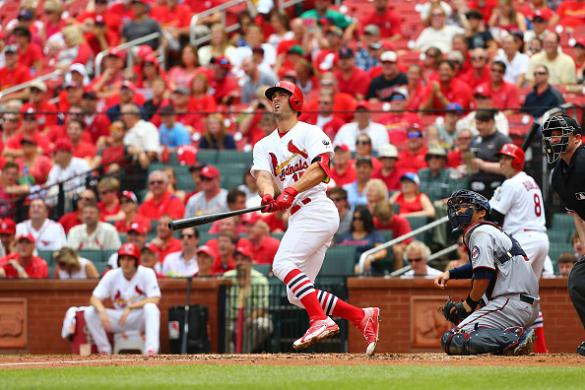 Michael Brantley (shoulder) sounds like he is good to go for Opening Day. Brantley was an elite performer in 2014 going .327-20-97-94-23 before being a very impressive performer in 2015 (.310-15-68-84-15). Last year he appeared in 11 games as his shoulder just never got right. Time will tell where he is at physically in 2017, and that’s my issue with him; we have no idea how his body will hold up. Just 29 years old, and inexpensive on draft day, I get the allure. Same time, he’s not on any of my club’s cause of the concerns. If he has a Melky Cabrera season this year I would consider that a success. We’ll see if he can even get back that level.

Maikel Franco leads the league with 77 at-bats this spring. He’s hitting a mere .234 with a .280 OBP. He’s only struck out 10 times, and does have six homers and 17 RBI, but it’s not the start I was hoping to see. Howie Kendrick is second in baseball with 75 at-bats, and he too has struggled to the tune of a .240 batting average and .250 OBP. Fourteen strikeouts and one walk is scary bad.

Randal Grichuk (Player Profile) took a pitch off his hand. Good news – it sounds like he is fine.  “Good to go,” Grichuk said. “I want to be in there. I’ve got a few things (hitting coach John) Mabry and I have been working on. I want to get that more consistent.” He’s a sneaky add in many drafts where people just don’t seem interested in his power bat.

Evan Longoria has a minor neck issue that will keep him out of the lineup for a few days (return Sunday). Folks, Longoria has missed two or fewer games in 4-straight seasons. He will be fine. Longoria is coming off a season of .273-36-98-81 and could offer a repeat performance as a 31 year old.

Wilson Ramos (ACL surgery) has been placed on the 60-day DL. That means all the lies about a return in April or May are done. Ramos can’t return until at least June. Hard to think that he catches much until the second half of the season. Recently signed Derek Norris is a passable second catcher in mixed leagues, at least for the first half of the season.

Kinda out of left field... Anthony Rendon might not be ready for Opening Day because of a leg issue caused by fouling a ball off that part of his anatomy. We’re still operating under the assumption that he will be fine for Opening Day, though there is still one obvious concern with Rendon – his ability to stay on the field. When he does make it onto the field, he has a ton to offer (see his Player Profile).

Here are the leagues I’ve written about this season, so give them a review if you want to see how I’ve employed my tactics.

Got a player you were wondering about? Take a look at the FSWA Award winning Player Profile Series.

Check it out. Everything is in there.

The Rankings are up to date as of this writing. Hopefully they’ve helped you to put together the best teams possible to attack the 2017 fantasy baseball season.

Best of luck to you all in the 2017 Fantasy Baseball season. We’re off to a great start. Let’s now embark on the long and winding road of pain and adulation that only the fantasy baseball season can bring. #FlagsFlyForever