Who will the A's use in the 9th inning... is there an answer? Plus, there's some talk about starting pitchers like Anderson, Lynn, McCullers and Skaggs. 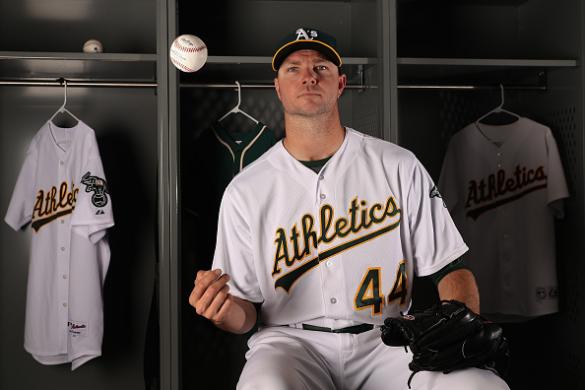 The A’s likely won’t have a set closer to begin the year. “We’d like to kind of narrow it down to X here and X there and not be this bullpen-by-committee thing where once you get into the game, no one knows when the phone rings who’s getting up,” Melvin said. “Will it be one guy who’ll close? Maybe not. A lot of it has to do with availability, too. We might use guys a little more one day and not use him the next day because we are deep, and we have guys with experience closing.”

As I’ve said all offseason, I would take Santiago Casilla if I was choosing one man from this pen. I’ve also said that I don’t know if any Athletic saves 20 games this season with the mess they have. What I do know follows.

1 – The team is pretty much convinced, as am I, that Ryan Madson isn’t the answer. If they were, they would have named him the closer a long time ago. Madson had 30 saves last season but also a seven year high in ERA (3.62) and WHIP (1.28) with a seven year low in strikeouts (6.82), a six year high in walks (2.78) while his 46.4 percent ground ball rate was his second worst mark in seven seasons. He didn’t dominate and doesn’t inspire any confidence at the moment.

2 – Casilla struggled at the end of last season, but he was still very solid when on the bump last year. Casilla has 69 saves the last two seasons. That’s the same number as Aroldis Chapman. He struck out 10.09 batters per nine last season. Zach Britton struck out 9.94. He had a 3.42 K/BB ratio last season. Cody Allen had a 3.22 mark. He posted a 1.19 WHIP last season. Jeurys Familia had a mark of 1.21 last season. He had a solid 1.32 GB/FB ratio, though that mark was an 8-year low as he allowed more fly balls than we’re used to seeing from his 36 year old arm. Again, Casilla’s my choice to lead this team in saves.

3 – Sean Doolittle has dealt with shoulder issues for a long while now. He dominated in 2014 before being limited to just 12 outings in 2015. He appeared in 44 games last season but he only threw 38 innings. He did look sharp when it was all said and done, his 5.63 K/BB ratio was killer and his velocity was back. Still, health concerns continue to dog him, and as a lefty it’s always possible Melvin chooses to use him as more of a matchup arm. Doolittle has 33 career saves in five big league seasons.

4- John Axford has saved at least 24 games four times with a career best total of 46 for the Brewers back in 2011. He saved 25 as recently as 2015, but last year was messy for the righty. Axford has a career low 8.22 strikeouts per nine, two full batters off his 10.29 career mark. He continued to struggle with the walk, four per nine, and his 2.00 K/BB ratio is dicey. Axford has also posted a WHIP of at least 1.44 in 5-straight seasons, so you can tell where my analysis is going, right?

STARTING PITCHERS – THIS AND THAT

Brett Anderson allowed eight hits and four runs over his five innings Thursday. You’ve been warned about the Cubs lefty over and over again.

Lance Lynn appears good to go to take the ball in the first week of the season for the Cardinals. Lynn suffered a hiccup recently, but he threw 80 pitches Thursday in a game against minor leaguers and pronounced himself to be health. He should start Wednesday against the Cubs as he will attempt complete his first season back from Tommy John surgery. I would have to think that 180-innings is the upper end, but Lynn is a solid arm to round out a mixed league rotation with given his pre-surgery stability. The risk is still there of course.

Lance McCullers is on everyone’s breakout list this preseason it seems. I gave my thoughts, positive and negative, in his Player Profile. McCullers allowed five runs over four innings Thursday and he ends spring with some terrible numbers: 7.31 ERA, 1.50 WHIP and a .294 BAA. He still brought the strikeout game of course with 24 in 16 innings.

Ricky Nolasco will start for the Angels on Opening Day. That’s the sad state of the Angels rotation at the moment. Garrett Richards and Matt Shoemaker are slated to go behind him, but the club still isn’t fully committed to using Tyler Skaggs on April 6th. It’s always elbow or shoulder with that guy, and while it looks likely that he will be ready to take his turn, manager Mike Scioscia said he will wait “a day or two” before making the call. “We’re going to follow Tyler very closely in the next couple days, but the workout he had today is definitely indicative of a guy that should be able to fall into our rotation, but we’re not going to make that determination for another day or two,” Scioscia said. Just move on.

Ervin Santana Player Profile. Better than you think I would wager.

Drew Smyly is set to miss 6-8 weeks with a flexor strain in his elbow. There is no surgery planned. That said, this is a massive blow to his 2017 outlook. At this point, holding him in a mixed league only becomes a viable option if you have a disabled list spot. Otherwise, feel free to drop him. Into his spot in the rotation with the Mariners moves Ariel Miranda. The 28 year old lefty made 12 appearances last season, 10 as a starter, on his way to a 3.88 ERA and 1.12 WHIP. He’s a decent talent, but without strikeouts (6.83 per nine) or grounders (31.2 percent) he really is nothing other than a streaming option in mixed leagues. Proceed with caution in mixed leagues.