Every year the folks over at MLB.com ask me to participate in a “slow” mock draft. Here are the results of the 2017 entry in the series. 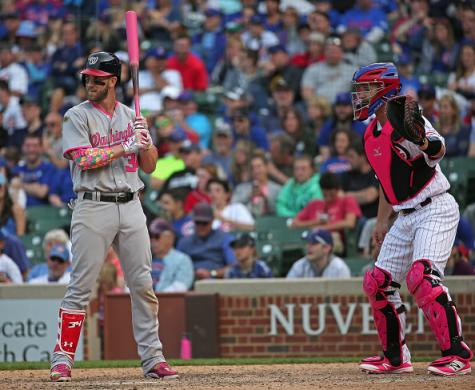 We all love drafting in fantasy sports. The most fun one can have is winning a league, but that feeling is closely followed by the chance to actually put a team together in a draft. Year after year the kind folks over at MLB.com invite me to take on others in a “slow” draft (a slow draft means it takes place over weeks instead of sitting down for four hours to knock something out – hey, we’re busy folks). Here are the results of the 2017 mock draft.

*Special Thanks to Zach Steinhorn of MLB.com for extending me an offer to participate in the draft yet again.

Here are THE RESULTS of the draft.

To see the thoughts of all the participants you can click on the 411 Fantasy Blog.

The commentary on my squad follows.

*Round taken in parenthesis.

I really like the mix in the outfield. Youth, power, some speed, the lovely upside last of Heyward and Puig later in the draft. Throw that dart Ray.

Correa and Bogarts up the middle is Rockstar stuff.

Abreu/Pedroia/Longoria aren't sexy names by any means, but they will be productive. Bank on it.

The catcher duo is solid, even with some early season concerns with Mesoraco, since I waited so long to roster them.

On the bump, I would likely be aggressive with relief arms if we had reserve rounds. That said, Kimbrel/Ramos are a solid duo that should have little trouble producing 60 saves with health. The starters include two of my younger favorites in Stroman (Ray’s Ramblings) and Taillon (Player Profile). You know I'm a fan of Teheran (Player Profile) as well. Hamels/Lackey/Gonzalez are a trio of veteran arms that any staff should be happy to have.

A solid squad here, one that is lacking a bit of speed on offense, but really, this is a very "Ray-like team" so you know I'm going to say I'm a fan.