On St. Patrick’s Day we take a look at the players that are skating with the luck of the Irish of late in our weekly look at the waiver-wire. 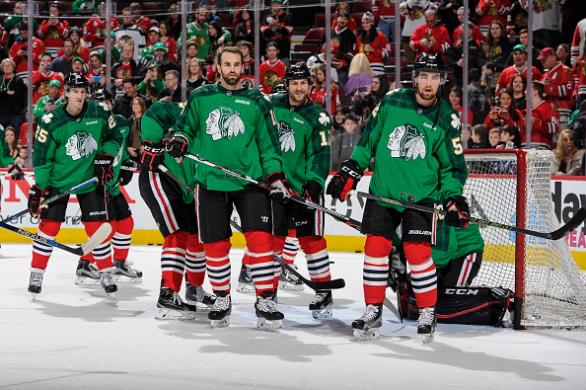 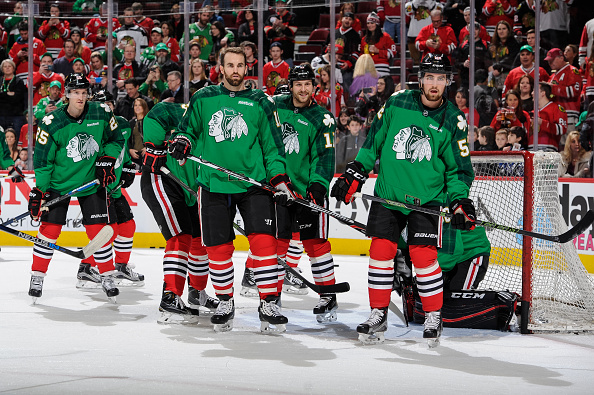 Oliver Bjorkstrand took seven shots on net his last time out. Two games earlier it was six shots on net. When a guy is that active you have to take notice. Moreover, in three of four outings he’s taken at least four shots on net. He’s also scored three times his last six games for the Blue Jackets.

Paul Byron is a small guy checking in at 160 pounds on his 5’9” frame. Hasn’t stopped him from lighting the lamp 19 times this season including four markers his last four outings. He’s only taken seven shots in those four games, and his plus/minus the last four games, despite all those points, is just +2, so there are limits to the goodness.

John Hayden scored 21 goals in 33 games with Yale this season. In his first game in the NHL he was on the ice for less than nine minutes but he still generated a shot on net while dishing out three hits. With Artem Anisimov on the shelf, Hayden is getting a shot at skating with Jonathan Toews.

Joshua Ho-Sang has nine games of experience in the NHL. The rookie has recorded three goals and handed out three assists (two of the points are with the man advantage). The last four games have been particularly impressive as he’s posted five of those six points.

Elias Lindholm has posted 36 points in 58 games this campaign. The centerman has produced a point in 5-straight games, one goal and four assists, and he’s a +4 skater in that time. In those four outings he’s been very active with the shots as well with 13 shots on net.

Adam Lowry of the Jets has just 19 goals since the start of last season. There hasn’t been much offensive excitement with the centerman. Still, there might be something to see of late. Over his last four games he has three points, and in four of five he’s taken at least two shots on net. He also has 12 PIMs his last four games. It’s not much, admittedly.

His last eight outings Jay Bouwmeester has handed out just two helpers, but he’s chewing up 23:00 minutes of ice-time. He’s also a +6 skater with 16 shots on net and 16 blocked shots for the Blues.

Justin Braun of the Sharks, a righty shot on the point, has posted a +3 rating the last three games. He’s been out of control blocking shots of late with at least four in each of his last four games for a total of 20 blocked shots in four outings. He’s also laid out nine hits his last two games. Can’t get much more active than that from the blueline.

Jakob Chychrun of the Coyotes has two goals his last four games during which time he’s also dished out three helpers. In those four games, he’s also taken 12 shots on net as he’s morphed into an offensive threat (two of the points have come on the power-play).

Darnell Nurse has used those 14 goals by the Oilers the last two games to great effect as he’s scored, handed out two assists, and posted a +7 rating. That’s only eight points and a +2 rating on the year, so be extremely cautious with expecting the offensive explosion to continue.

Keith Kinkaid has made it to the ice three times in March allowing a total of four goals. He’s only gong 1-2 but his 1.55 GAA and .938 save percentage speak to how well he’s performed when called upon. Meanwhile, Cory Schneider has been torched for 12 goals his last four games including allowing four goals on 10 shots in his last outing.

Eddie Lack has been on point his last seven outings with a 1.79 GAA and .932 save percentage. He’s also allowed two goals or less in three straight outings for the Hurricanes.

K. Dach - F
CHI
Kirby Dach said he was much more confident during the postseason and it's something he is hoping to build on going into the 2020-21 season.
"I know I have a lot more to give, a lot more to grow as a person and as a player," said Dach, who is participating in Team Canada's World Junior selection camp. "I want to continue to develop along this path and hopefully become an impact player for many years to come in Chicago." He feels more confident in his shot, but he has also showcased some impressive passing plays during Canada's training camp. Dach is slated to take on a larger role with the Blackhawks during his sophomore season and he appears to be up to the challenge.
Added Yesterday 5:42 pm (EST)
Added Yesterday 5:42 pm (EST)

Scott Powers for The Athletic

A. Cirelli - F
TB
Anthony Cirelli's agent, Pat Morris, said there's "nothing new to report" when he was asked how contract negotiations are going with the Tampa Bay Lightning.
It doesn't sound like there has been much progress in that regard between the two sides, but that could change after the Lightning announced the signing of Mikhail Sergachev to a three-year contract on Wednesday. Cirelli and Erik Cernak, who are important restricted free agents, still need to be re-signed by Tampa Bay.
Added Yesterday 4:14 pm (EST)
Added Yesterday 4:14 pm (EST)

J. DeBrusk - F
BOS
Jake DeBrusk is aiming to get stronger and create more "chaos around the net" during the 2020-21 season.
"Theres no reason I cant average a hit per game," said DeBrusk shortly after the Bruins announced that a two-year contract between the two sides had been reached. The 24-year-old forward will be looking to disrupt more plays in the hope of contributing more offensively. DeBrusk had 19 goals and 35 points in 65 games last season.
Added Yesterday 4:09 pm (EST)
Added Yesterday 4:09 pm (EST)

L. Dostal - G
ANA
Lukas Dostal's loan to Ilves of Finland's Liiga has come to an end.
In 11 appearances this season in Finland's top league, Dostal had a 10-1-0 record with a 1.64 goals-against average, a .941 save percentage and one shutout. The Anaheim Ducks chose the 20-year-old netminder in the third round (85th overall) of the 2018 NHL Draft. Dostal is poised to head to North America to prepare for the 2020-21 season.
Added Yesterday 2:01 pm (EST)
Added Yesterday 2:01 pm (EST)

J. Boychuk - D
NYI
Johnny Boychuk's playing career has come to an end because of an eye injury.
Boychuk suffered the injury during the 2019-20 regular season, which was his second to the same eye. He was diagnosed with optic nerve damage. The 36-year-old defenseman had two goals, 11 points, 128 blocks and 135 hits in 64 games last campaign with the Islanders. Boychuk played in 725 career NHL regular-season contests. He still has another two seasons left on his contract that carries a $6 million cap hit and could end up on LTIR going into the 2020-21 campaign.
Added Yesterday 12:36 pm (EST)
Added Yesterday 12:36 pm (EST)

C. Bradley - F
DET
The Detroit Red Wings think they might have a steal in Chase Bradley.
Bradley wasn't taken until the 203rd pick of the 2020 NHL Entry Draft. Obviously players who go that late are projects at best and many of them don't make it to the NHL, but successful teams get value out of their late round picks. In the past, Detroit drafted Jonathan Ericsson, Henrik Zetterberg, Pavel Datsyuk, and Tomas Holmstrom in the sixth round or later. “For sure, you see some of those players who are drafted in the late round, and the impact they’ve had in the NHL, it’s crazy,” Bradley said in a Zoom media interview after the draft. “It didn’t affect them too much. Being drafted is one of the main things you strive for. It definitely doesn’t change my mindset on anything.” Those players were key pieces for the Red Wings, but in recent years Detroit hasn't had nearly as much success with their late round picks. The Red Wings are hoping to change that recent trend with Bradley though. They like his competitiveness and the steady rate that he's been developing. He's been playing in the USHL, but is set to go to Northeastern to continue his development in the NCAA.
Added Yesterday 10:37 am (EST)
Added Yesterday 10:37 am (EST)

P. Kane - F
CHI
Patrick Kane recounted a time when he was a kid and his coach, Darryl Belfry, benched him after scoring a goal to teach Kane a lesson that he took to heart.
Belfry had been trying to get the young Kane to utilize his teammates and had been warning him that if Kane continued to try to do everything by himself, there would be consequences. Finally, in a game where his team was up 5-1 but hadn't scored in a while, Kane decided to carry the puck, got around two opposites and scored. He returned to the bench, gloating, but as a result he spent the last period of the game sitting. "[Patrick] was like, 'After I'm scoring a goal, like, what's wrong with scoring?'" Belfry recalled. "And I said, 'It's not the fact that you scored, it's that this goal is not projectable. Yes, we're in a 5-1 game, we're better than this team, they probably long since given up, so yeah of course you can score there. But what happens when we play against really good teams and now they're trying to take your head off? This attitude and this play is just not going to work." Kane wrote about that moment in a foreword for Belfry's new book, “Belfry Hockey: Strategies to Teach the World’s Best Athletes,” and Kane credited it as helping him to focus on developing his vision and playmaking. It's a lesson that served him well in the NHL.
Added Yesterday 8:28 am (EST)
Added Yesterday 8:28 am (EST)