Broxton is ripping it up. Rupp was a better hitter last year than many thought. Rodon ready to go. Murphy is hurt. Hader has been demoted. Thames already facing a shift. 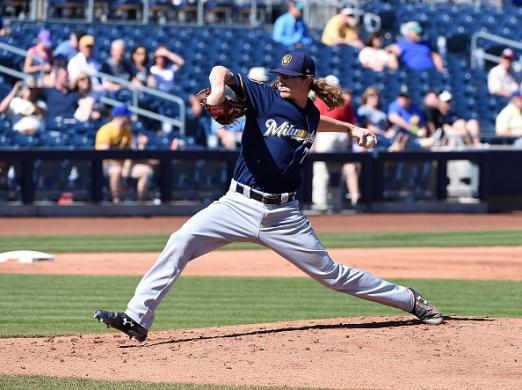 Keon Broxton has started off hot in spring with three homers, nine RBI, nine runs and two steals in 11 games. Blazing start indeed. Alas, he’s also been caught stealing three times and has nine strikeouts in 31 at-bats. He’s going to have to make more consistent contact to live up to the breakout expectations folks have for him in ’17.

Yu Darvish punched out six Monday over 3.1 innings against the Giants. Looked sharp did he.

Josh Hader has been sent to the minors. Said manager Craig Counsell: "I think he has a good chance to impact this team this year. When we have a need, make it an easy decision for us." If he can find a third pitch, hone it, he could dominate at the big-league level.

Tommy Joseph took a pitch off his hand and was removed from game action Tuesday. It doesn’t sound like it’s serious at this point, in fact x-rays showed no break, but you know how these things can go. See his Player Profile for his performance outlook if he’s healthy.

Tom Murphy has a broken arm and he’s likely down 4-6 weeks as a result. That crushes his value in the short-term and focuses attention on Tony Wolters who will be the starter for the Rockies early in the season. A better defensive backstop than Murphy, Wolters is a very moderate bat but he should be able to see the majority of work ahead of Dustin Garbeau. Wolters hit .259 with a .723 OPS last season as he hit three homers over 230 plate appearances. There really isn’t much of a reason to expect his offense to improve much this season. By the way, it sounds like Ian Desmond is hopeful of a late April return.

Ivan Nova was a star with the Pirates last season. What should you expect this season? Check out his Player Profile.

Salvador Perez knee was hurt in an accident in the WBC. Initial tests showed no structural damage, but he’s off to get an MRI Tuesday. We expect the results to be clean, but I have to admit to holding my breath a little bit.

Which pitchers are adding a new pitch this season? I wrote about this very thing in Adding a New Pitch.

Just to verify, David Price will begin the year on the DL with his elbow issue, though the growing expectation is that he will be pitching for the Red Sox in April.

Carlos Rodon threw 64 pitches against minor leaguers in a simulated game Tuesday. There has been some concern about having a dead arm last season with Rodon, but it sounds like it’s a big fat nothing at this point. Rodon might miss the first turn in the rotation this season, maybe not, but he should be good to go early. I’m not worried about his outlook at all at this point. Rodon has a great pedigree, a big arm, and he found himself last 11 starts last season: 3.11 ERA, 9.45 K/9, 2.70 BB/9 and 1.19 WHIP.

Ahmed Rosario has already been sent to minor league camp. We should see the Mets’ uber-prospect in the second half.

Cameron Rupp had a mere .752 OPS last year. Still, he hit the ball really hard last season. Out of 246 batters who had 200 at-bats last season, Rupp was 29th with an average exit velocity of 92.9 mph. Rupp posted a .993 OPS last season against lefties, just .699 against righties, so it seems like a platoon could be in the cards long-term for Rupp who will attempt to hold off Jorge Alfaro for the starting catching spot all season long with the Phillies.

Ryan Schimpf blasted away last season. Can he repeat his breakout effort in 2017? Give his Player Profile a read.

Jake Smolinski will have surgery on his shoulder. The timetable is not yet known. Sounds like Alejandro De Aza and/or Jaff Decker will get a chance to take on a greater role with the Athletics. They  are now worthy of a look in AL-only leagues.

Eric Thames was a monster in the KBO. He’s not going to repeat that success in the big leagues as you can see in detail in his Player Profile. Doing research on his batted balls, teams are already starting to shift on Thames, though manager Craig Counsell isn’t buying it. "I do think that's interesting," Counsell said. "I think they're going on a little bit of just 'profile,' to be honest with you. I have a hard time believing -- maybe it is off the Korea spray charts, but in Spring Training, I have a hard time believing they are doing that much research.”

Chris Tillman (shoulder) is improving but he’s still not ready to go. He’s not going to be ready on Opening Day. For now, the Orioles are looking internally for an early season replacement for Tillman. Those names are Mike Wright, Tyler Wilson and Gabriel Ynoa.

Adam Wainwright was a letdown last season. His Player Profile speaks to just how much.