Osuna has a scary outing. Boyd might make the Tigers rotation. The Jays, and Mariners, are making platoon plans in the outfield. Moncada isn't likely to open the year in the bigs. 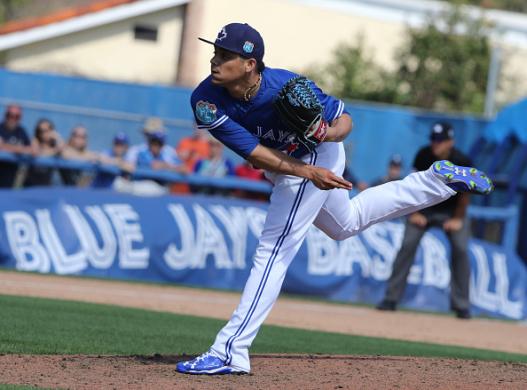 Matt Boyd appears to be the front runner to land the 5th spot in the Tigers’ rotation. “I thought overall, Boyd looked outstanding,” manager Brad Ausmus said. Anibal Sanchez and Mike Pelfrey are merely retreads and neither has been remotely sharp this spring. Boyd had a poor 4.53 ERA last season, but after the All-Star break he made 12 starts (13 outings) leading to a 3.86 ERA and 2.29 BB/9 rate. He was brutalized for 12 homers in 63 innings and doesn’t dominate, but he can be quite effective as a depth big league starter.

The Blue Jays have a plan in left field, and it’s not Melvin Upton playing daily. Manager John Gibbons said the club is planning on going with a platoon of Upton and Ezequiel Cabrera. Steve Pearce doesn’t have the arm strength yet after offseason surgery, so he will play first base. “Pearce could be out there too,” Gibbons said. “We’re still trying to figure (left field) out.” While Gibbons hinted that Upton will face lefties, he isn’t closing the door on Upton seizing the majority of the playing time. “I can tell you this, if he’s playing really good, he’ll be out there a lot,” Gibbons said. “He can control that. We’ll see. We’ll get the guy who's playing the best out there.” All this news suggests that all three men have a very moderate level of interest in mixed leagues.

Lucas Giolito allowed a run and three hits over four innings Thursday. That’s a 2.00 ERA through nine innings for the huge righty who has allowed two solo homers while walking two. He may not start the year with the big league club, but if he keeps pitching the way he’s looked in his three outings this Spring it won’t be long before he’s plying his wares in the big leagues.

Guillermo Heredia reworked his swing this offseason and it’s working, and impressing. "A totally different guy," manager Scott Servais said. "He’s made some adjustments with his swing.” Heredia figures to see time in left field in a platoon of some sorts with Jarrod Dyson. Heredia has gone 10-for-23 this spring and is close to locking up the spot next to Dyson leaving Ben Gamel on the outside looking in. Heredia would be on the short side of the platoon with speedster Dyson seeing the majority of the work.

Yoan Moncada has eight strikeouts and has gone 3-for-18 this spring. After last year’s tank job late in the year (12 strikeouts in 19 at-bats), it’s pretty clear that he isn’t going to break camp with the big-league club. Still, the White Sox have been impressed with everything about the youngster. "We see him every single day working on, obviously, his offense," White Sox manager Rick Renteria said. "But it's one of those things where the games and the experience that he continues to garner through the spring is just trying to get him ready for the regular season. He has been pretty impressive. He has been pretty diligent in his work. We're really happy with how he's moving forward." The team will likely start Tyler Saladino at second with Yolmer Sanchez filling in behind him. Remember, Moncada has all of 227 plate appearances above Single-A and he won’t turn 22 years of age until late May. He’ll be up at some point this season but it won’t be in April.

Just something to make you nervous. Roberto Osuna allowed five runs, four earned, without recording a single out in Mexico’s loss to Italy in the WBC. It’s just one outing and likely means nothing, but I’ll be watching closely the next time Osuna takes the bump cause, despite his obvious talents, if he’s struggling to get outs early on their could be save opportunities headed elsewhere in the Jays pen, at least until Osuna gets things straightened out. Tis the fickle nature of the 9th inning.

Albert Pujols will play his first game Friday as he will DH Friday. Coming off surgery on his foot, I’ve always maintained that Pujols would be ready for Opening Day.

Max Scherzer is throwing another batting practice session Sunday with game action still to be determined. “As long as he faces hitters, it really doesn’t matter what the format is. We just want him to have hitters in the box,” manager Dusty Baker said. Baker went on to suggest that the team is pretty much of the mind that Scherzer isn’t going to be ready for Opening Day. “Well, we’ve been thinking that all along, sort of. But we’re preparing for that. I mean, it’s hard to count Max out. It just depends on how he progresses the next few weeks.” Scherzer’s cost continues to slide while A.J. Cole’s appears to be on the slight rise in NL-only leagues.

Matt Shoemaker allowed three runs and five hits over three innings Thursday. He also struck out six men. Through eight Spring innings he’s racked up 14 strikeouts but that ERA sits at 9.00. That’s the strange thing with Shoemaker. He strikes out 8.00 batters per nine and he rarely walks fools (1.88 per nine) in his career. Yet, he also seems to have those blow up outings that make it hard to trust him. Through 436.1 career innings he has a 3.75 ERA and 1.18 WHIP, really solid numbers for an AL arm, and he seems fully recovered from last year’s scary incident. He’s a sneaky depth add in some formats where people don’t recognize the tools he owns.