Sonny Gray is going to miss April with a lat issue. Zack Greinke lost his velocity. The Red Sox are thinking about hitting a rookie, Benintendi, third. 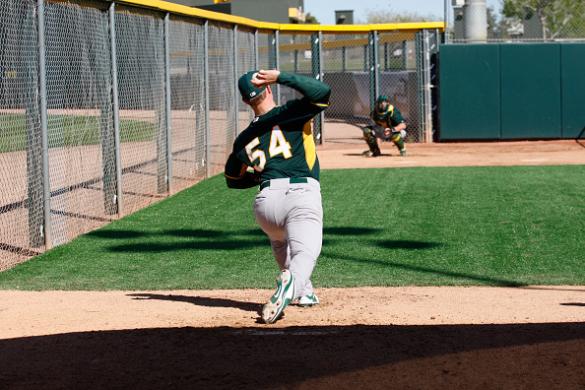 Sonny Gray will miss Opening Day as he’s been shut down for three weeks with a lat strain. The injury means he will likely miss the entire month of April. Coming off a lost season, this injury torpedo’s any hope of Gray making a return to prominence this season, at least until the second half. The injury shoots down any desire of reaching on Gray at the draft table in any format.

The A’s will have to turn to Jesse Hahn, Raul Alcantara and Andrew Triggs. The injury to Gray would seem to lock Triggs into the rotation with Hahn likely to take the fifth leaving Alcantara there for when the need arises. Triggs has some nice skills that he flashed over 56.1 innings last season (just six starts): 8.79 K/9, 2.08 BB/9, 2.00 GB/FB. That’s a skill set to invest in if you play in an AL-only league, and one to have mild interest in if you’re in a deep mixed league as well if he can lock down that spot in the rotation.

The Rankings up have been updated reflecting this situation.

Wednesday Greinke allowed six hits over 2.2 innings against Team Mexico while dealing with diminished velocity. “It’s still early,” Greinke said. “It is what it is. It’s still early and it’s not like some crazy, crazy thing. But it’s not ideal, either.” Greinke threw his heater at 91.3 mph last season and in this outing he couldn’t get past 89.5.  “It doesn’t really concern me with Zack because I know he knows the process,” Diamondbacks manager Torey Lovullo said. “He knows what he has to get to. He knows that the velo will climb.”

Greinke began throwing this season later than normal as he wanted to make sure he was healthy after dealing with physical woes last season. It’s too early to panic with the righty, way too early. Keep an eye on how he looks the next couple of times out before you start fading him since you should never let a handful of innings dictate your feelings on a hurler. See his Player Profile.

Most of us thought that superstar youngster Andrew Benintendi would hit second for the Red Sox this season. There are a couple of obvious reasons for believing that. First, his skillset is a perfect fit for a #2 hitter. Second, his lefty bat would break up the righty thing at 1-3 the Sox are planning on going with. Third, the idea of sandwiching him between a leadoff man and third hitter would put him in an idea spot to find success. Word out of Sox camp though is that Benintendi could end up hitting third. Here’s what they are thinking with a proposed batting order:

“A lot of times, a player is going to tell you what he’s ready for or capable of and how you would think he would handle adversity by not being fragile mentally,” manager John Farrell said. “If we didn’t feel that way about Andrew, I don’t know that he’d be in the big leagues last year.”

I get it, the idea of hitting him third, but I still think he’s best suited to hit second. For more, see his Player Profile.

In honor of the final episode of the season for It’s Always Sunny in Philadelphia...