Matt Wieters finally upped with the Nationals. Who will be closing for the Nats? What does booze, weight loss and former prospect stardom have to do with baseball? 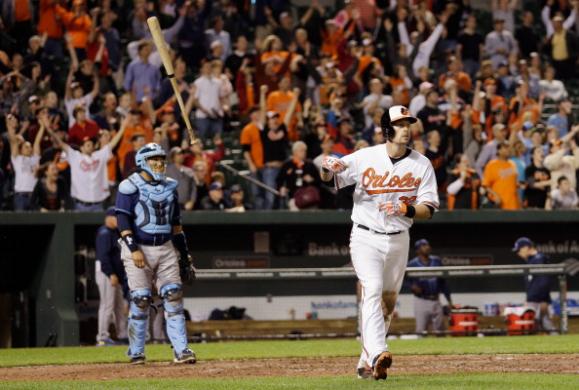 After struggling to find a team willing to commit to him, Wieters agreed to a 2-year deal with the Nationals with an opt-out clause after one year. He will be paid $10 million in 2017 with the option coming in at $11 million for ’18.

The Nationals now have Wieters, Derek Norris, Jose Lobaton and Pedro Severino to catch. They likely don’t need all four men. The signing of Wieters might mean that the White Sox will soon be ready to deal David Robertson (according to Jayson Stark). For more on the Nationals’ closer spot... see the next segment below.

This move means that Wieters is the starter and Norris ends up as the guy behind the dish when there is a lefty on the bump. In essence, both backstop see their value go down as a result of this signing as neither will be able to post the at-bat total they were hoping for.

Wieters has hit passably against righties with a .250/.312/.404 line, but he’s been much better against lefties (.272/.333/.467). Wieters also profiles as a guy who should be catching 130 games, so this seems like an odd signing unless the Nats do indeed end up dealing Norris. If doing a draft tonight, you need to downgrade both backstops like I wrote above.

Who is the Nationals closer? According to Nats’ GM Mike Rizzo, there is actually a closer battle with Shawn Kelley, Blake Treinin and Koda Glover. Koda is 23 years old and throws cheddar with an average fastball of 96.6 mph last season. He only struck out 16 men in 19.2 innings in the bigs, but he has the look of a future closer. Don’t think he’s ready now. Treinin owns a 2.91 ERA, 1.33 WHIP and a 3.48 GB/FB ratio through 148 big league games. He would seem like an ideal setup man. My best guess is that Kelley will end up being the closer. Here are Kelley’s numbers the last two seasons: 11.77 K/9, 2.14 BB/9, 2.55 ERA, 0.99 WHIP. Given those numbers, I’m not really sure how there is even a “battle” at the moment.

Rick Ankiel admitted to getting blasted on vodka before games because he was so in his head about the “yips” he was dealing with that wouldn’t allow him to throw strikes. “Before that game, I’m scared to death. I know I have no chance. Feeling the pressure of all that, right before the game I get a bottle of vodka. I just started drinking vodka. Low and behold, it kind of tamed the monster, and I was able to do what I wanted. I’m sitting on the bench feeling kind of crazy I have to drink vodka to pitch through this.” How sad is this story?

Kyle Barraclough is one of the main setup man in Florida now that Carter Capps is out of the mix. The club brought in Junichi Tazawa and Brad Ziegler this offseason, and this team also has David Phelps who excelled last season setting up A.J. Ramos. Still, the club doesn’t appear to be 100 percent committed to Ramos, and the other three names mentioned all have some concerns. That’s one hell of a pen ain’t it? Oh yeah, in case you were unware, Barraclough struck out 113 batters in 72.2 innings last season with a 1.92 GB/FB ratio.

Josh Bell (knee surgery) has hit off the tee, hit in the batting cage, fielded some grounders and participated in some light base running at camp. Sure seems like he’s on track to be ready to start playing in games by the end of the month just as the Pirates expected when he had the minor knee procedure.

Archie Bradley is a former top-10 overall draft pick who has ideal size at 6’4”, 230 lbs. The D’backs have jerked around the righty, moving him from pen to rotation, as questions continue about whether or not he will be able to develop a third pitch to compliment his high 90’s heater and impressive knuckle-curve. Lots of talent, but it’s unrealized at this point.

Why have folks stopped talking about Alex Bregman? Kyle Elfrink and I discuss.

Avisail Garcia lost 14 lbs this offseason. He now weighs it at 254 lbs and wants to get down to 248 by the time games start. It doesn’t matter. The 25 year old is never going to get it. In more than 1,500 plate appearances he’s walked 96 times, hit a mere 39 homers and has a .695 OPS. The production has simply never matched the skills that he flashes from time to time.

Franklin Gutierrez signed a 1-year, $2.6 million deal with the Dodgers. The nearly 34 year old outfielder last appeared in 100 games in 2010, the last time he had 250 at-bats. He can hit lefties, no doubt, but he’s nothing more than a spot player at the moment. Still, why do the Dodgers keep stock piling outfielders? As of now they have Gutierrez, Andrew Toles, Joc Pederson, Scott Van Slyke, Trayce Thompson, Enrique Hernandez, Yasiel Puig and Andre Ethier. We still only start three outfielders in baseball, right?

Josh Hamilton is blasting homers all over the place. Here we go. "It's just a different sound," farm director Jayce Tingler said. "The only two like it are [Marlins' Giancarlo] Stanton and him," hitting coach Anthony Iapoce said. "How did it look?" Mike Napoli said. "He was hitting moonshots." Why does any of this matter? Answer is – it doesn’t. His body is broken down and it’s just a matter of time before he starts having to miss work. The 35 year old outfielder last had 350 at-bats in a season in 2013. He didn’t have a single one in 2016. Don’t be swayed by the reports.

Brandon Kintzler will almost certainly open the year as the Twins closer. Duh. Glen Perkins is trying to work his way back from shoulder surgery, and reports suggest that he could begin the year on the disabled list to make sure he is “right.” In regards to Kintzler, see my thoughts in Minor Signings.

J. Wilson - RP
FA1
Jon Heyman of MLB Network believes that the Mets may turn to Justin Wilson after failing to sign Brad Hand.
The Mets were considered serious contenders -- at one point possibly the favorite -- to sign Hand at one point, but reports indicate that he'll be heading to Washington and the Nationals. Wilson appeared in 68 games over the last two years, and he registered a 2.91 ERA and 67/28 K/BB ratio in 58 2/3 innings. He'd be a bridge to Edwin Diaz if he did return to the Mets.
Added 8:40 pm (EST)
Added 8:40 pm (EST)

B. Hand - RP
WSH1
Jeff Passan of ESPN reports that the Nationals have signed Brad Hand to a one-year, $10.5 million contract.
As Passan points out in the tweet, he gets more than the $10 million option that Cleveland declined at the end of the 2020 season. Jesse Daugherty notes that the deal is pending a physical, and does not contain any options. The left-hander will serve as the stopper for the Nationals after leading MLB in saves in 2020 with 16, and he posted an excellent 2.05 ERA, 0.77 WHIP and 29/4 K/BB ratio in his 22 innings over the truncated campaign. He'll be a strong fantasy option in 2021, and the most reliable closer that Washington has had in a while, with all due respect to the other options they've had.
Added 7:31 pm (EST)
Added 7:31 pm (EST)