Are the Indians really going to curtail the workload with their ace, Corey Kluber? Who is the closer in Cleveland? The Mets throw hard, but that’s a bit of a catch-22. 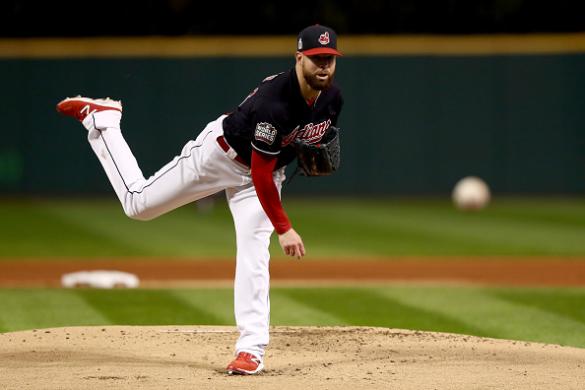 There was a minor stirred caused this weekend when the Indians announced that Corey Kluber might not be starting on Opening Day for the club. "We've told Kluber," manager Terry Francona said, "because we are slowing him down a little bit, if he's not ready for Game 1, we can adjust. And we're more than willing to, because there's a lot at stake over the course of the year. We all know Opening Day is a big deal, but we want him to position himself where he's ready to log as many innings as we need."

Kluber threw 215 regular season innings and then made a franchise high six post season starts leading to a full season total of 249.1 innings. That’s a big number indeed. Same time, Kluber showed zero drop off last season at any point. Plus, it’s not like Kluber is a 22 year old coming off a 90 inning increase season to season. Here are Kluber’s innings pitched marks the last three years – playoffs included.

Being a bit cautious is fine and understandable, but I really can’t envision a scenario where the Indians wouldn’t use Kluber the first time through the rotation. Honestly, five months after the season ended is throwing 94 pitches on April 3rd really gonna be an issue? Come on.

I’m not downgrading Kluber with this news.

Let’s talk about their bullpen.

Cody Allen and Andrew Miller were aces down the stretch and into the playoffs for the Indians last season. Here are their numbers last postseason.

"Cody is our closer," Francona said Saturday. "For the most part, having him knowing he's there at the end is good. It's good for everybody else. It allows some flexibility for looking at matchups and things. When there's an end in sight for the guys, it's good for everybody."

Here is how Miller was used down the stretch last year by the inning Miller appeared with the Indians.

Fact is, it seems like Francona would rather use Miller when the game is on the line, and that’s frequently not in the 9th inning.

"There could be times where we'd flip-flop it. It could be usage," Francona said. "I don't know the exact [reason]. I guess the one instance I can think of is like, if Cody hadn't been used for three or four days and we really wanted to pitch him. Well, then you don't wait for the ninth, because you might not have a lead. There's instances like that. But, I do like the idea of Cody finishing and Andrew pitching [against] the meat of the order."

As our Mock Draft Army ADP data shows, Allen is being taken at about the right spot (13th at RP) while Miller’s ADP is sky-high (9th at RP) for a guy who doesn’t seem likely to get a huge workload in the 9th inning. To see how we have them ranked see the 2017 Fantasy Baseball Player Rankings.

Jacob deGrom says his elbow is fine. I gave my thoughts on his outlook in this Ramblings piece.

Matt Harvey is coming back from surgery. My thoughts on him can be found in Avoid Matt Harvey.

Noah Syndergaard has gained 17 lbs. of muscle. I wrote about that weight gain in this Ramblings piece.

Steven Matz, well, I don’t know why anyone would be reaching on that guy since his elbow or shoulder seem to be an issue about every three weeks. See this Ramblings piece.

Zack Wheeler is ok after an early hiccup in camp. I really don’t care.

Obviously, there’s a lot of health concerns with the Mets. A LOT.

The major league average on the 4-seam, straight fastball, was 93.1 mph last season. Here is a list of Mets that threw harder than that last season.

Wheeler didn’t pitch last season but his average heater in 2014 was 94.7 mph.

Matz wasn’t mentioned because he doesn’t thrown a 4-seamer according to Statcast, though his 2-seamer came in at 93.9 mph, so he’s clearly a very hard thrower.

I also think part of the issue with the constant injuries with the Mets is their reliance on the slider, and the velocity they throw that pitch. Let’s take a look at each of the top-4 arms according to PITCHf/x.

Note that Syndergaard threw his slider 21.1 percent of the time last season.

* Note that Harvey didn’t throw enough innings to qualify last season, but if he did hit 88.7 mph slider velocity would have been the fourth highest in baseball.

* Note that deGrom didn’t throw enough innings to qualify last season, but if he did hit 88.6 mph slider velocity would have been the fifth highest in baseball.

* Note that Matz didn’t throw enough innings to qualify last season, but if he did hit 87.3 mph slider velocity would have been the eighth highest in baseball.

That’s a lot of velocity and torque on those arms, yet another reason why caution is warranted with all Mets arms at this point. They throw too hard, too often, and their slider velocity is off the charts. Note that sliders put an awful lot of stress on the elbow, a concern for many organizations that preach caution with throwing the pitch.