What are the Astros doing with their bullpen and who is leading off for the Royals? Meanwhile, what's the status of Blackmon, Donaldson, Pujols, Ryu and Tilson? 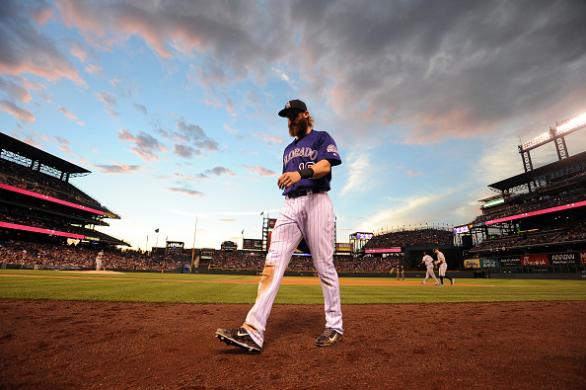 I’m already uncertain what the Astros are doing, and every report quoting manager A.J. Hinch makes me even more nervous. The latest reports are about their bullpen where he said that Michael Feliz has a “leg up” to make the team out of camp. Let’s be honest here, shall we? When guy posts a 1.18 WHIP with 95 strikeouts over 65 innings how is there any debate that he deserves a spot on the Opening Day roster? I’m waiting to hear a valid argument to explain why he shouldn’t be a lock for a spot in that pen.

Charlie Blackmon is going to bat leadoff for the Rockies, and manager Bud Black wants him to run more. “Charlie is dangerous in (the batter’s) box and became a real threat, each and every time he got in the box or when he got on first base (in 2015),” Black said. “We’ve got to get back to that. We’ve talked about that a little bit. Charlie was a little bit banged up last year. He was able to play, but I don’t think his legs felt great.” Blackmon fell from 43 steals in 2015 to 17 last year as he dealt with a couple of foot issues. Still, the guy nearly went 30/20 with 111 runs scored and a .324 average so he was still a fantasy start. If he’s able to get his steals total back up, he’s averaged 29 steals the last three seasons, then Blackmon’s got a legitimate chance to be a top-5 outfielder this season.

Jorge De La Rosa joins Rubby De La Rosa with the Diamondbacks. JDLR is likely done being a starter and will try to make the club out of the bullpen. The now 36-year-old lefty owns career marks of 4.65 in the ERA column and 1.45 in WHIP. He is finally out of Colorado so he’s an arm you can consider adding in the reserve rounds in NL-only leagues.

The good news is that Josh Donaldson should be fine for Opening Day. The bad news is that the third sacker, who has appeared in 155 or more games each of the past four seasons, has a calf injury that could keep him sidelined for 2-3 weeks. As of now there’s no reason to panic, but if there’s any kind of setback, dropping him on your board wouldn’t seem like the worst idea in the world.

Eric Gagne is 41 years old. He last threw a big-league pitch in 2008. Prepping for the World Baseball Classic, to pitch for Canada, Gagne has been throwing so well that he’s considering trying to make it back to the big leagues. "I feel great. It's almost scary," he said. From 2002 to 2004 he was the best reliever in baseball with at least 45 saves and 114 strikeouts every season. Yes, I said 2002-04.

Ariel Miranda is likely starter #6 right now for the Mariners. If he doesn’t end up in the rotation he might be sent to Triple-A until a starter is needed early in the year, making him someone to avoid in mixed leagues. However, Drew Smyly and James Paxton certainly come with health concerns, and it’s not like Yovani Gallardo is someone the club is really depending on after his crash and burn last season. Miranda is a solid late round grab in AL-only leagues.

Jon Niese signed with Yankees. Early word is that he will head to the bullpen to give them a lefty to count on (if you can count on Niese of course).

Folks ask me daily what my thoughts are on players. Two easy ways to find out. (1) Check out the Fantasy Alarm Player Rankings. (2) Check out the ever growing and award winning Player Profile Series which includes articles as well as videos of yours truly.

Albert Pujols (foot) is still questionable for Opening Day. I’m still saying he will be on the field for Opening Day. Here is what Pujols said over the weekend. “It’s been really good,” said Pujols. “No soreness at all afterwards. That’s a good sign. I got to start hitting in the cage and moving around and doing agility.” The last three seasons Pujols has averaged 33 homers, 106 RBI and 82 runs while playing at least 152 games every season.

If I’m gonna bash managers, why not turn my attention to Ned Yost? I simply don’t understand what I’m about to relate. Yet again, Yost is considering batting Alcides Escobar leadoff. Why on earth would he do this? It’s obvious. Escobar is fast. Mr. Yost, it’s not 1937. We’ve advanced a long ways from the days where fast guys hit leadoff. The goal of a leadoff man is to get on base, something the 30-year-old Escobar has proven, for years, that he’s incapable of doing. Escobar owns a .297 career OBP and the mark has been .293 and .292 the last two seasons. If there ever was a 9th hitter for an AL club this is it. HE IS A TERRIBLE OFFENSIVE PERFORMER. He can’t hit, .262 average, has no power with 31 homers and a .345 SLG in over 1,100 games, and can’t get on base. He’s an embarrassing offensive performer. The other option to hit leadoff is Alex Gordon. Gordon is 33 and has little speed, and he’s coming off a down season (.220/.312/.380). Still, his ability to get on base dwarfs that of Escobar as he owns a .345 career OBP mark that was .377 as recently as 2015.

Welcome to the Mock Draft Army.

Hyun-Jin Ryu was barely hitting 86 mph last week in a bullpen session with many fastballs coming in at 84-85 mph. For his big-league career, PITCHf/x has his fastball velocity at 90.7. He’s a total disaster after throwing 4.2 innings the last two seasons. I don’t know why I keep getting questions about him (you know who you are out there... just stop asking, move on, spend your time more wisely than worrying about this broken-down lefty).

Charlie Tilson is really fast. He could open the year as the White Sox starter in center field. He’s already hurt though. The speedster won’t run for 10 days as he rests a stress reaction in his right foot, an injury he suffered Friday. A speedy guy with a hurt foot is no bueno (that’s not good for those of you that don’t speak Spanish).

Jered Weaver signed a 1-year, $3 million contract with the Padres. As long as he’s healthy he’s going to be part of a Padres rotation that looks ghastly at the moment: Weaver, Clayton Richard, Jhoulys Chacin, Luis Perdomo and Christian Friedrich. Trevor Cahill is also available with Jarred Cosart also hopeful of making a push. None of those arms, literally, are worth a roster spot in mixed leagues. None.