Jonathan Schoop is one of the better power hitting second baseman in baseball. Is he anything other than that moving forward? 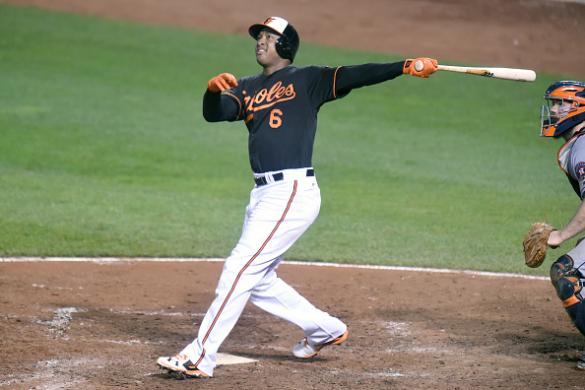 If a guy has an elite skill, you can bump him up your board a bit, even if he’s a bit “thin” overall (not an overall performer).

If a guy has holes in his game, but the price is low enough, you can still be all-in on said player.

We have to decide with Schoop – do the strengths outweigh his weaknesses?

In 2016 Schoop was one of eight second base eligible players to hit 20 homers with 80 RBI and 80 runs scored.

Can he sustain that pace?

Schoop has shown pop at the big-league level, particularly the last two seasons. Schoop missed 78 days in 2015 with a knee issue or he almost certainly would have had at back-to-back 20 homer seasons if not 25 big flies in consecutive efforts.

Schoop has hit 35.9 percent of his batted balls in the air for his career. That’s slightly better than the 35 percent league average last season, but really, it’s league average stuff. Therefore, he must live by the HR/FB ratio, right? Yep.

For his career Schoop owns a strong 15.1 percent mark. Last season he was at 14.9 percent. It’s a sustainable pace. However, the number could easily drop to the 13.1 percent mark he posted in 2014, and if it does he loses a couple of homers. If he sits out some games, doesn’t play daily, he could lose a few home runs. Odds suggest that his homer total will go down, not up, in the coming season. That is unless he gets lucky with the HR/FB ratio, or he hits more balls in the air. Speaking of the homers he did hit...

Last season he hit 12 “No Doubt” homers, the fourth most in baseball. That’s nearly half his home runs. Last season he hit his average homer 407.1 feet, the 29th best mark in baseball. Schoop hit only four homers that were “Just Enough” (for more on those designations see All About the Home Run). When he hits em’, they go a long way. Still, he doesn’t have much success against lefties in the homer department, one every 42.1 at-bats against southpaws versus once every 21.0 against righties in his career.

Schoop hit .268 in the minors and he’s hit .251 at the big-league level. He has hit .267 in three of four seasons with the Orioles, so there is some hope that his .270-ish mark the last two seasons is sustainable. Still, there are some big concerns.

First, he struck out 137 times last season. It’s not a prohibitive number by any means, but that pace last season, a 21.2 K-rate, was actually a three year best. The mark could be even higher in 2017, perhaps a good deal. Take a look at his swinging strike ratio which speaks to his contact issues. His career mark is 15.7 percent. The last two years the mark has been over 16 percent. Amongst players with 950 plate appearances the last two seasons Schoop mark of 16.6 percent is the second worst in baseball (out of 150 qualifiers). The only man worse than Schoop was Avisail Garcia at 17.3 percent.

Worse than that, if it’s possible to be worse than that, is that Schoop never walks, and I mean never. The guy played 162 games last season, more on that below, and he walked 21 times. Not in a month, but 21 times all season long. Moreover, in 390 career games, covering 1,464 plate appearances, he has walked 44 times (Joey Votto walked more than that in the second half last season). No player in baseball, all 150 with at least 950 plate appearances the last two seasons, has a worse walk rate than Schoop’s 3.1 percent mark.

Finally, Schoop also cannot hit lefties (something I noted above). In his career, he has 403 plate appearances against lefties. Not only has he hit a pathetic .227, but he also has a mere nine homers and 29 RBI. Toss in a 266 OBP and .340 SLG and you have one awful hitter against lefties.

Oh, and because he doesn’t produce many hits, and has no idea how to take a walk, his career .283 on-base percentage is deficient. He’s “improved” the last two years, though his .301 mark in that time is 10th worst in baseball. It’s impossibly difficult to consistently score 80 runs with an OBP mark that atrocious.

Though he ran a bit in the minors, he hasn’t run at all in the big leagues with only seven steal attempts in 390 career games. He’s not going to help move the needle at all in this column.

Schoop played every game last season, all 162 of them, at second base.

As of this writing, here is Schoop ADP data.

Schoop is a flawed hitter. He has some pop no doubt, and if he plays daily he figures to be passable in the counting categories. Same time, he never runs and his batting average is extremely unstable. You can pair him with guys like Dee Gordon and Elvis Andrus up the middle for speed/average, but understand if you roster Schoop that last season appears to be the high-water mark.

10-Team Mixed: No steals and no average stability means it’s a no go for me with Schoop in this format.

15-Team Mixed: Maybe as a middle infield option, but only in the rare instance that my only need was power and I had no concerns about batting average or steals.

AL-Only League: The counting categories won’t be elite, but they figure to be very solid for a middle infielder in this format. Still, the normal concerns, enumerated many times above, certainly apply.