Ray’s Ramblings: The Dream is Dead

It’s over. The 2017 season is no more for Alex Reyes who will need Tommy John surgery. Ray also touches on the health of King Felix and Pujols and who will close for the Astros and Phillies. 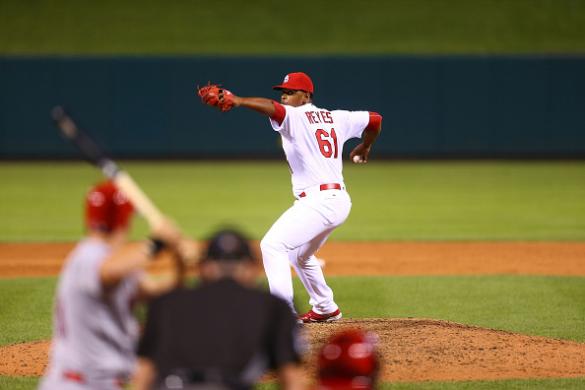 DONE BEFORE HE STARTED

Alex Reyes has had elbow issues before. In 2013 he strained his right elbow (he eventually had platet-rich injection in the area to help promote healing). He even missed the Futures Game in 2015 while being shut down with shoulder inflammation. But coming into the season as the #1 right-handed pitching prospect in baseball, the 22 year old Reyes was being looked upon as a future star, and one that could start to shine this season.

Reyes had tests on his arm in January and things were deemed to be fine.

Reyes threw last Friday and had a sharp pain in his elbow.  "I threw an off-speed pitch and I let the trainer know and apparently this is what has to happen. It was just kind of a pain throughout my elbow that I haven't felt before."

An MRI was taken. Reyes has a complete tear in his UCL. He will need Tommy John surgery. He will miss the entire 2017 season and could be out up to 18 months as he recovers from the procedure (see my review of Tommy John Surgery).

The dream is dead.

Michael Wacha will be given the first shot to take over the 5th spot in the rotation, though we’re also hearing that Luke Weaver and Trevor Rosenthal will get a shot to prove they deserve to be in the rotation to start the year. Note that Wacha is continually dealing with shoulder woes and durability is not a strong suit. Rosenthal, the former closer, could start but he might also end up as a multi-inning reliever (he was told this offseason to prepare as if he would start in a prescient move by the front office). Weaver has strong stuff, is an impressive prospect, and he just might end up making the most starts this season out of those three arms.

See the 2017 Fantasy Alarm Player Rankings to pick up how the injury changes the rankings of the Cardinals starters.

Ken Giles is going to be the primary closer in Houston this season, though to be fair, we said the exact same thing 12 months ago before spring struggle sent him to middle relief purgatory for half the season. Manager A.J. Hinch also hinted that he could use Luke Gregerson, Will Harris or Chris Devenski in the 9th if a need arose. If Giles pitches like he did in the second half it really shouldn’t matter as it would force Hinch to use him in all the high leverage situation his arm can handle. Over his last 29.2 innings he struck out 52 men, 16.33 per nine, with a 3.77 ERA that was elevated by a crazy high .352 BABIP that will improve substantially with a larger sample size. That said, remove his six run beat down on September 23rd and his second half ERA would have been 1.91. ERA can be a fickle thing with relievers.

Jeanmar Gomez is the current closer for the Phillies according to manager Pete Mackanin who clearly shouldn’t be managing a big-league team if he actually believes the words coming out of his mouth. “I believe he deserves to be called our closer at this point,” he said. Gomez had a 19.13 ERA and 3.25 WHIP over his last 12 outings last season, and over the last 24 the numbers were 9.90 and 2.25. Of course he should be the closer. Read that again. Over 20 innings the guy allowed 22 earned runs, 35 hits and 10 walks. How could Mackanin be serious? Never mind that of the 16 men who saved 30 games last season that Jeanmar’s 6.16 K/9 is the worst, or that his 68.4 percent left on base percentage was also the worst. He’s, at best, the third option for the 9th inning if you actually care about skills behind both Hector Neris and Joaquin Benoit. Yes his manager says he is the closer. Did I wake up in 1988?

Jay Bruce, an outfielder in case you forgot, will get some work at first base for the Mets this spring. Can’t hurt to add some flexibility to his game, not to mention he would give the Mets an option if Lucas Duda isn’t healthy or performing (Wilmer Flores will get a look as a platoon option at first base as well).

Willson Contreras will serve in the David Ross role this season as the exclusive catcher for Jon Lester. Ross is around in a front office role so he will obviously tutor Contreras on how to best handle the veteran all-star.

The Giants do not want to platoon Mac Williamson and Jarrett Parker in left field. They do not. In fact, their GM Bobby Evans said the following. “Yeah, I don’t know that I want both of them to be on this club,” Evans said. “I really would rather one guy take the job and then maybe one of the veteran guys or other non-roster invites to manage so that he’s the second part to the puzzle. In the case of Williamson, he can go down to Triple-A. If Williamson makes the club as the every day guy, then Parker would either have to make the club and be a backup — not necessarily a platoon but a backup — or you’d have to put him through waivers and I don’t see him getting through waivers. I really need him to step up and make this club.”

Felix Hernandez is coming off his first wipeout effort in a decade as he posted a 3.82 ERA and 1.32 WHIP over just 153.1 innings. He got in “better” shape last season leaning out to 207 lbs. No more of that. Felix is back up to 224, one lb. off his listed playing weight, as he worked out like a monster this offseason. "I've got to prove people wrong," said Felix. For my thoughts see his Player Profile.

Not that it’s exactly surprising, but the Pirates announced that Andrew McCutchen will bat third this season. For more on the Pirates star outfielder see his Player Profile.

Albert Pujols had foot surgery in December to heal his plantar fasciitis. He says his recovery is going well and the only thing he currently cannot do is run. His status for Opening Day is up in the air. I’m calling it. He will be on the field. Pujols’ teammate Garrett Richards is also working his way back from injury. Choosing to pass on Tommy John surgery for his elbow, Richards has done rest, stem cell treatments and everything else he can think of as he hopes to last for 30-starts in 2017. He will be on an innings and pitch count all year long. He says his arm feels normal. Everyone feels normal before the bullets start flying.