Ray’s Ramblings: Around the Diamond

Should you give a flip about Altherr, Alvarez, Casilla and Grossman? Why does no one talk about Ervin Santana? Why don't facts matter? How good is Mr. Votto? 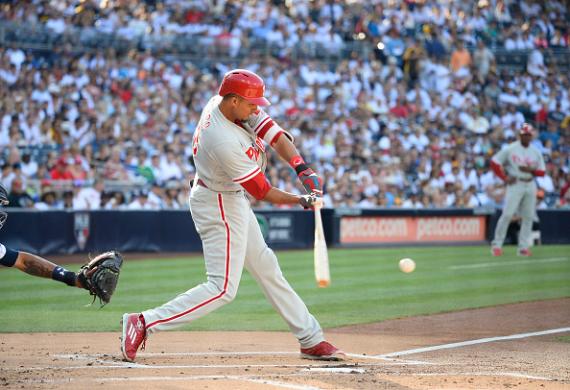 Aaron Altherr could begin the year as the Phillies fourth outfielder. Coming off a season in which he missed time with a torn tendon in his wrist, Altherr has a lot to prove after hitting .202 with a .597 OPS for the Phillies last season over 227 plate appearances. There’s a 15/25 season with this

talent, we used to say that a lot about Desmond Jennings too, but all the questions swirling around him mean he’s nothing more than an NL-only add at the moment.

Miguel Cabrera admitted that his ankle wasn’t 100 percent at the end of last season. You wouldn’t have known it if you look at his overall numbers (.316-38-108 with a .956 OPS). "Hopefully, it doesn't bother me during the season," Cabrera said. "Hopefully, I can be healthy." Note that this was the first season/offseason since 2012 that didn’t include a surgery or a disabled list stint.

Santiago Casilla currently has an ADP of 510.8. Obviously, that means he’s not being drafted. That’s a mistake in my book which I wrote about in the FSTA Experts Baseball Draft. It’s quite possible he leads the A’s in saves this season, and his effort last year was certainly better than that of Ryan Madson. Speaking of ADP, Robbie Grossman is intriguing at 556.3. The guy did hit .280 last season with 11 homers, 37 RBI and 49 runs scored in just 332 at-bats. How did he score so many runs? Check out that pretty looking .386 OBP. That’s well beyond the .347 mark he owns in the big leagues, but there is some skill here. Plus, there is this. As far as I can ascertain he has a legitimate shot to start in left field for the Twins this season.

IF YOU REALLY WANT TO DIG INTO ADP DATA, CHECK OUT THE INITIAL 2017 OFFERING OF THE MOCK DRAFT ARMY FROM HOWARD BENDER.

Lance Lynn will be about 17 months removed from Tommy John surgery when the season begins giving him a better chance than most to be effective in his first year back (see Tommy John Surgery). Sounds like the Cardinals will be extra cautious with the righty in spring, potentially pushing back his first outing until the second time through the rotation. Barring a setback, he appears set to start though there are like 49 options for the Cardinals in the starting rotation.

Glenn Perkins shoulder still isn’t right. Limited to two outings last season, after 3-straight years of 30+ saves, his outlook for the 2017 campaign is extremely murky. Make sure you don’t forget about Brandon Kintzler who I wrote about in this Ray’s Ramblings piece.

Carlos Santana is a first baseman, but it sounds like he might try his hand in the outfield this season as well. I ain’t gonna run away from a nice boost in positional flexibility if it comes. Check your league rules for how many games in season you need for a new spot.

No one ever talks about Ervin Santana. Why is that? Is he boring? Sure, I can give you that, but the guy is coming off a season with a 3.38 ERA and 1.22 WHIP. That’s a better ERA than Danny Duffy and Kevin Gausman, and that WHIP was also better than Chris Archer and Marcus Stroman.

This guy really wanted to watch the soccer game.

Josh Tomlin walked 20 batters last season in 30 outings. He allowed 36 homers as well. Which number is more remarkable to you?