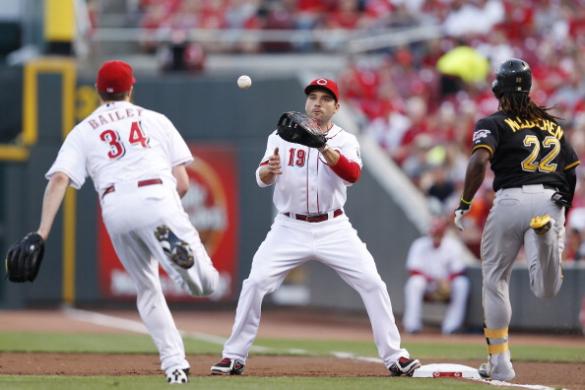 Homer Bailey had his season ruined last year by Tommy John surgery. He struck out 27 batters in 23 innings over six starts last season, but he was bombed more frequently than not leading to a 6.65 ERA and 1.83 WHIP. Still, he was healthy and entering the 2017 season with a bit of steam as things were looking up. So much for that. Bailey had a setback with his arm and the result was arthroscopic surgery to remove a bone spur from his elbow. The Reds are saying he will be able to resume throwing in 4-6 weeks. That said, he will likely begin the year on the disabled list. Bailey just went from a maybe in mixed leagues to a definitive no. Don’t bother with Bailey at this point.

Gordon Beckham is back with the Giants after signing a minor-league deal. A top-30 prospect in all of baseball in 2009, that is after being a first round selection in the 2008 draft, Beckham came out guns a blazing as he had his best season as a rookie going .270-14-63-68-7 over 103 games. He never hit .270 again. He never posted a .347 OBP again. He never posted a .460 SLG again. Remember his tale when you go all in with young players. He was a can’t miss prospect who, well, missed.

The D’backs signed Hank Conger to a minor-league deal. Let me see if I’ve got this right. The Diamondbacks have brought in Conger, Josh Thole, Chris Iannetta and Jeff Mathis this offseason. Did major league baseball change the rules with catchers? Are they now required to start two like we do in fantasy?

Coco Crisp hit only .231 with a .700 OPS last season, but the 37 year old did hit 13 homers while stealing 10 bases. He could probably do something similar again in ’17, but as of this writing he’s yet to find a team that will offer him the chance to be that guy. He wants to keep playing, though it’s unclear if that will happen at this point. Have to think he signs with someone at some point.

Jorge De La Rosa is still a free agent, and apparently he’s about a week away from agreeing to a deal with someone for some undetermined amount. JDLR had a 5.51 ERA and 1.64 WHIP this season, and for his career the numbers are 4.65 and 1.45. Blame Coors a bit, fine, but I blame the lack of refinement that has led to a career walk rate of 4.07 per nine. That’s just bad.

Colby Lewis is 37 and kinda just a guy. Still, he posted a 3.71 ERA and 1.13 WHIP last season and over his last two seasons he has a 1.20 WHIP over 52 starts. Odd that he can’t find a 5th starter spot somewhere, isn’t it? There was a report that the Twins were interested, but it turns out that wasn’t accurate.

Javier Lopez retired with four World Series wins. The sidewinder was death on lefties and get this, though he made 839 career appearances he threw a total of 533.1 innings. Pretty amazing, isn’t it?

Carlos Quentin is just 34 years old. In 2008 he went .288-36-100-96 with a .965 OPS in just 130 games before he famously broke his wrist hitting his own bat. He hasn’t been an effective hitter since 2013 and doesn’t even have a big league at-bat the last two seasons. Still, he’s not ready to give up on his dream so he signed a minor-league deal with the Red Sox. Might be worth a $1 in an AL-only league, maybe, but there’s certainly no certainty that he will even make the Sox roster.

Noah Syndergaard says that he has gained 17 lbs this offseason. He now weighs in at 253 lbs while he’s dropped his body fat by 1.6 percent from last season. Even if he’s now stronger, and that will help in the long run, I’m really not a fan of a player gaining that much weight in an off-season even if it’s “good” weight. Mechanics are so important for a hurler and we now have to wonder a bit how he will handle the extra weight.

Turns out that one of the issues with Matt Wieters this off-season that has played a part in him not having a team yet is the fact that he suffered a significant laceration on his left forearm in a home accident in November. Scott Boras says he is fine now and Boras, who always seems able to pull a rabbit out of his hat, has found the numbers to do that. (1) His success at throwing out runners is slightly better post-Tommy John surgery. (2) The Orioles ERA last season was 4.72 when Wieters didn’t catch and 3.98 when he was catching. #WhoWillBite

Brian Wilson, you know Mr. Beard who threw 98 mph while racking up saves for the Giants, is intent on continuing his pitching career. The now 34 year old, who turns 35 in March, believes his path back to the majors is the knuckleball. This isn’t some prank. Wilson truly intends to pitch in the big leagues again as a guy who relies on the knuckleball, a pitch he has thrown since his youth.

Sounds like C.J. Wilson’s baseball career might be over. He apparently is set to go into car racing. A solid reliever before becoming a solid starter, Wilson had a solid career before arm woes sidelined the now 36 year old lefty.