Friday is waiver-wire time here at Fantasy Alarm, and we take one last look at the wire before the All-Star break. 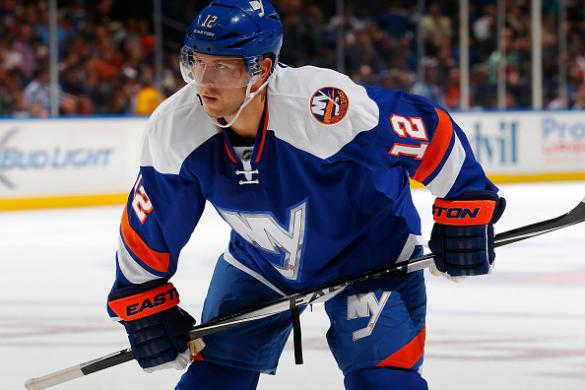 Josh Bailey has just six goals this season. So why is he on this list? He’s starting to finally heat up. Over his last four games he has a goal and four helpers, and in 2-of-3 games he’s taken five shots on net. I also see a 6.5 percent shooting percentage that is roughly half of his career 11 percent mark, so further success could be in the cards if he keeps firing the puck.

Andre Burakovsky has scored a goal in each of his last three outings, so he’s probably already been picked up off waivers as the Caps have gone scoring crazy. He’s also dished out three helpers his last four games during which time he’s been a +6 skater. On the year he has a mere eight goals with a +8 rating so he was a nobody on the scoreboard before the last week.

Andreas Athanasiou... feel like I just wrote about him (wink, wink). If he’s still out there, what are you waiting for? Over his last seven games he’s scored five times, handed out three helpers, and been a +8. Shocked to see that he’s still available in a good deal of leagues.

Patrik Berglund has three lamp lighters the last three games, and six in his last nine games. He’s also dishing out some physical play with at least three hits in 7-straight outings for the Blues. He’s legitimately hot right now.

He might stand just 5’9”, but Frank Vatrano is solidly built at 200 lbs. He scored twice in his last game and has three goals his last five outings (one assist). He’s also taken 19 shots on net despite seeing less than 15 minutes of ice-time in four of those outings. Also, he’s been a (-2) skater so you will have to take the good with the bad though skating on the first line with the Bruins is something he did in his last outing making him an intriguing add.

Pavel Buchnevich has 14 points in 14 games including points in 5-straight outings (3g, 4a). Going back further he has a point in 8-straight, though of course that goes back to November 5th because of his time away from the Rangers. He’s taken just eight shots on net so the pace of goal scoring is going to slow appreciably unless he picks up the pace there. Please tell me he isn’t still on your wire, despite that concern.

Nate Schmidt is part of that surging Caps club. The blue liner has 12 points this season but six of them have come in his last eight outings. The last four times out he’s also averaged more than 18 minutes of ice-time as well.

Jordan Subban has been called up by the Canucks. A fourth round selection in 2013, Jordan had nine goals and 13 assists in 36 games at the AHL level, a performance that netted him an All-Star selection. He also scored 11 times last year in his first professional season, so there isn’t much to worry about on the offensive end, though questions persist about his defensive chops because of his size (5’9”, 175 lbs).

He hasn’t been on the ice much this season with the Preds, but when Jusse Saros has been called upon he has excelled with a 1.44 GAA and .952 save percentage over nine outings. He has made at least 32 saves his last three outings as he continues to perform at a level that is higher than Pekka Rinne, though Rinne has looked sharp his last three times out with an impressive .953 save percentage.