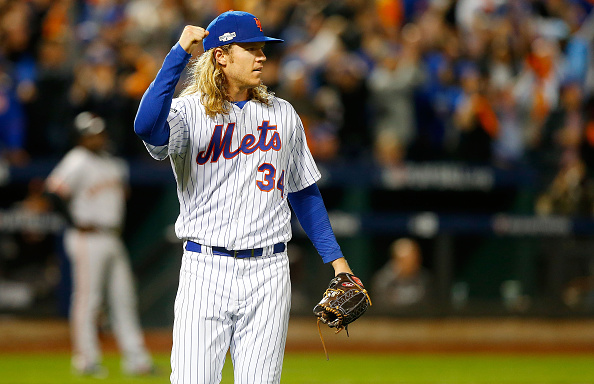 WHAT IS EXIT VELOCITY?

“Exit Velocity is defined as the speed of a baseball after it is hit by a batter. This includes all Batted Ball Events -- outs, hits and errors.”

WHY DOES IT MATTER?

We’ve long known that the harder you hit the ball, the more likely it is that you will attain a base hit. This if over the course of weeks, months etc. It may not matter for a couple of games, but over the course of the season if a guy hits the ball hard, he should produce a lot of hits. If a player doesn’t produce despite hitting the ball hard, then you have yourself a guy who is primed for a big-time rebound the following season.

*Unless otherwise noted, there are 190 batted ball events as a minimum for each of the categories below.

Here are the men who produced the hardest average hit baseball in 2016. 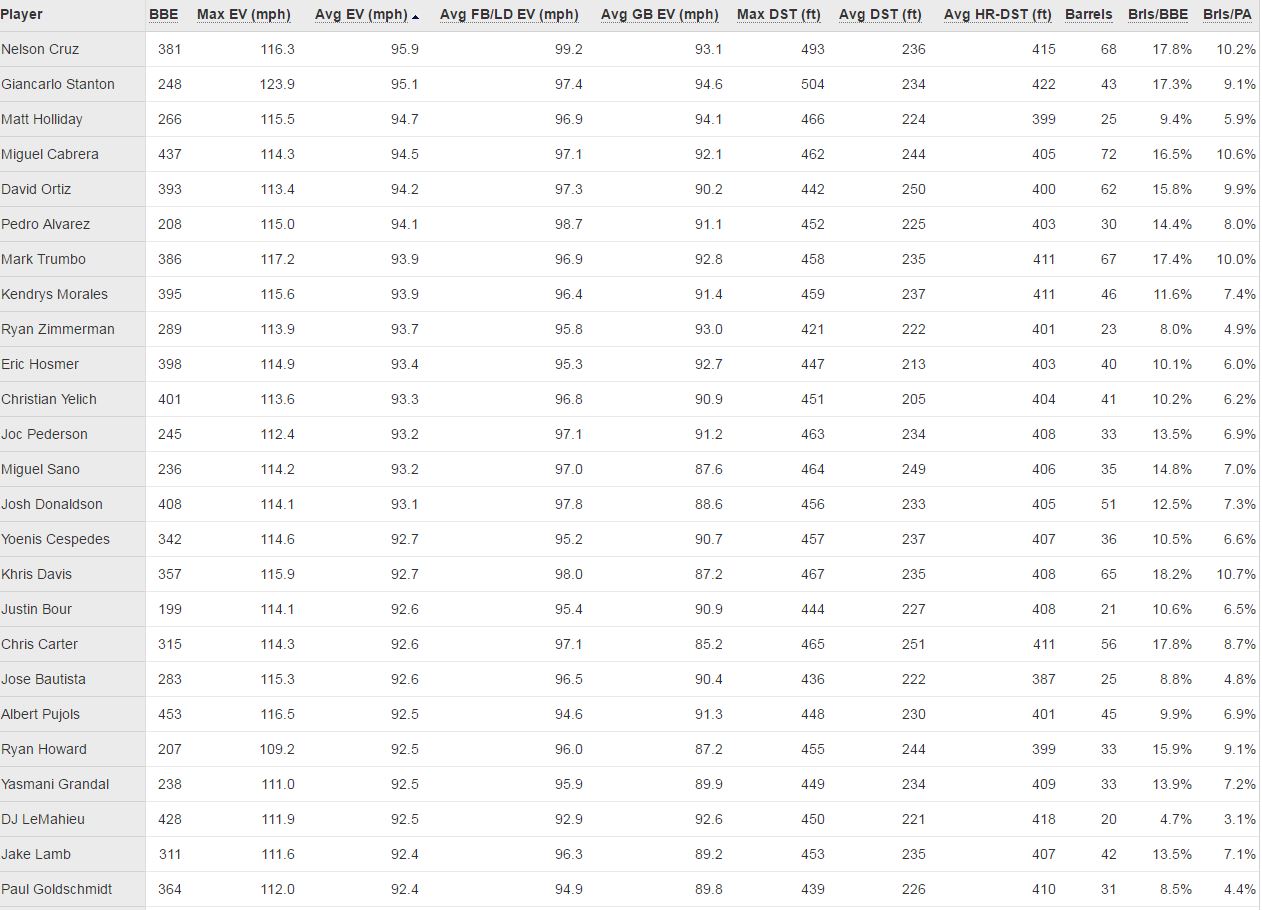 Nelson Cruz hit the ball harder than anyone last season, followed closely by Giancarlo Stanton. Hardly a surprise for those big poppers.

Matt Holliday might not be washed up overall. He could have a solid, cheap on draft day, season in 2017 if he can stay on the field with the Yankees.

Kendrys Morales and Ryan Zimmermann surprised, especially RZ. When on the field, frequently less and less with each passing year, Zimmermann still hits the ball hard.

At 92.6 mph are a trio of sluggers – Justin Bour, Chris Carter, Jose Bautista.

Teammates at 92.4 mph – Goldschmidt and Lamb.

As for the players that didn’t have 190 batted ball events, here are a couple of players of note.

Aaron Judge posted a mark of 95.5 mph, less than half a mile per hour below Cruz’s league leading total.

Keon Broxton was just behind Stanton, a mere tenth, at 95.0 mph.

Gary Sanchez was at 94.1 mph, just a tenth lower than David Ortiz.

Tyler Flowers isn’t a sexy play in fantasy baseball, though you have to admit his last name is sexy as all get out. His mark of 94.0 was a tenth harder than Mark Trumbo.

I predicted a breakout last season for Domingo Santana. It didn’t happen. Still, on the 140 batted ball events recorded by MLB.com he produced a velocity mark of 93.8 mph.

Tommy Pham... for those in league specific setups, posted a mark of 93.4 mph. 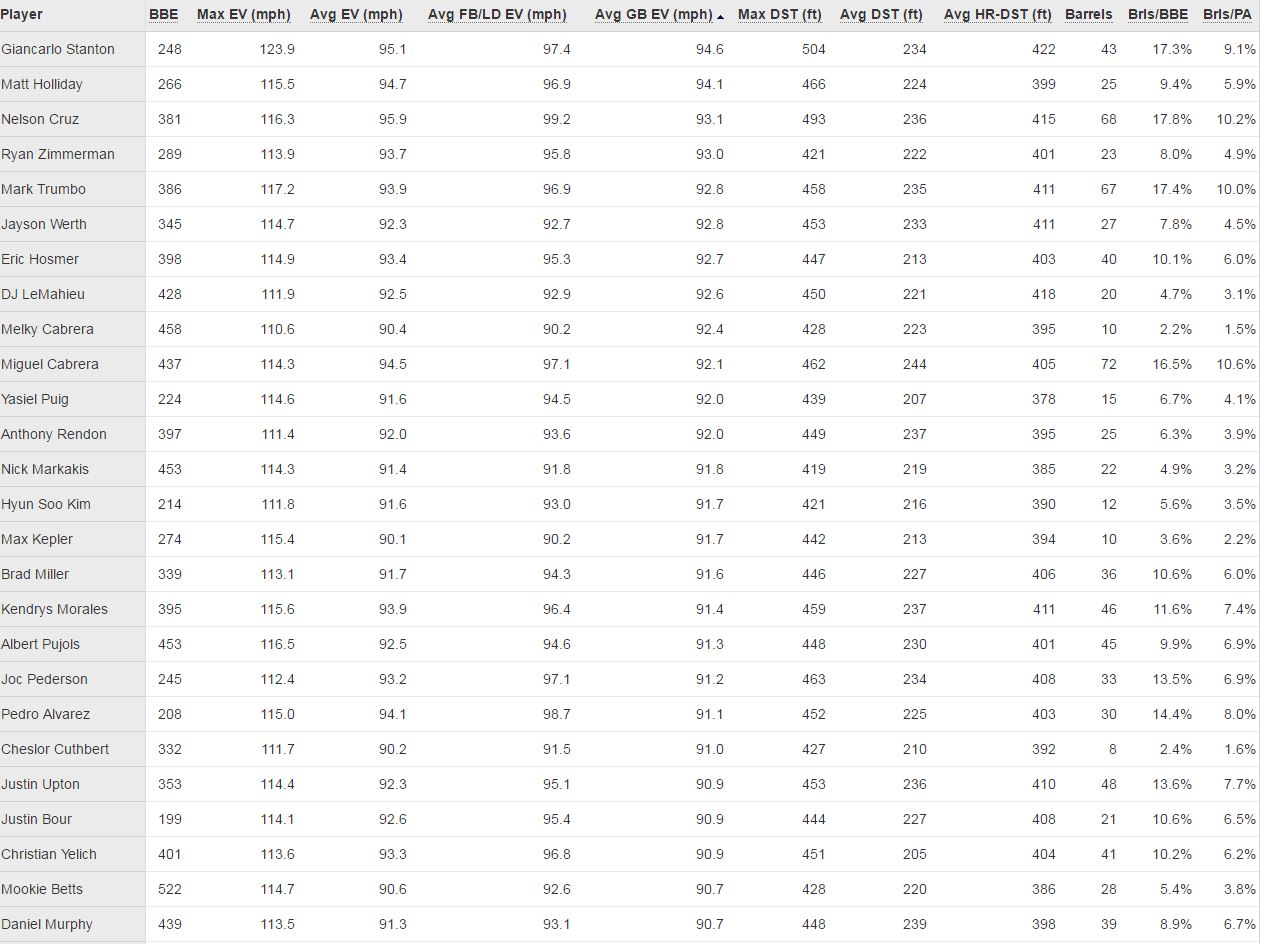 Giancarlo Stanton has long been knowns as the batter who hits the hardest ground ball. The data supports that belief.

Matt Holliday was second best in baseball in velocity on the ground.

Jayson Werth is aging and not the power hitter he once was, but when he keeps the ball down he still hits it awfully hard.

It’s not at all surprising that DJ LeMahieu was a top-10 play last season as his game is hit the ball on the line and run. He was excellent in that respect last season.

There is Yasiel Puig, just one tenth behind Miguel Cabrera. That man is extremely talented, but with a ten-cent head it’s unclear if it will ever come together for Puig. 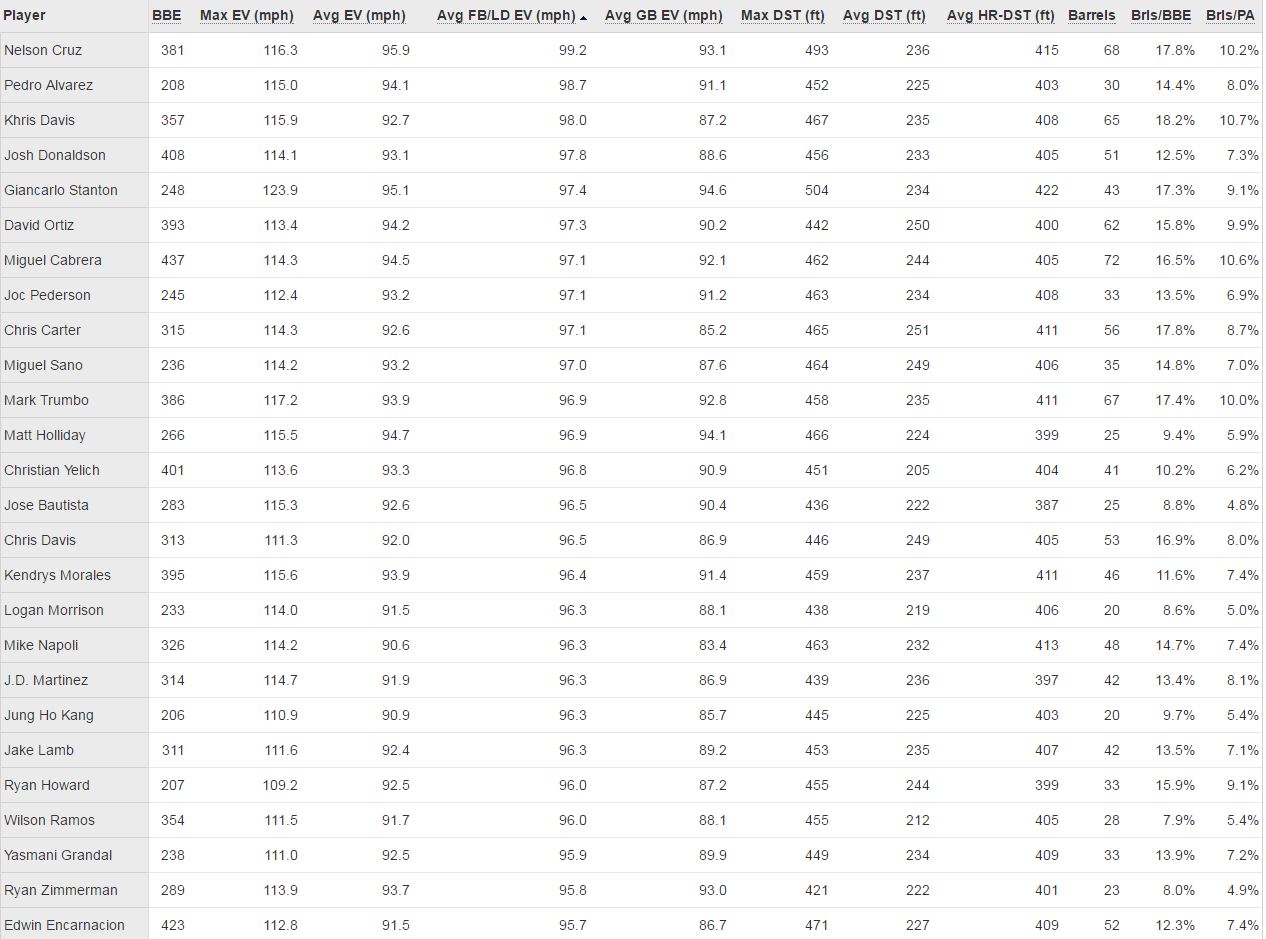 Pedro Alvarez and Khris Davis round out the top-3. They are the same guy. Grip it and rip it.

Joc Pederson was a top-10 performer last season with a mph mark that was exactly the same as Miguel Cabrera. That’s impressive, is it not? Pederson could take the next step if (A) he figures out how to hit lefties or (B) he starts running again.

Miguel Sano and Mark Trumbo were a tenth of a mph apart, and that makes sense. Check out those the names of Matt Holliday and Christian Yelich. If he gets 500 at-bats Holiday could return to the 25-homer level. Yelich is an ascending player that seems to grow on a yearly basis. A 25-homer season is also doable for him if he continues to lift the ball (his fly ball rate went up five percent last season) because when he hits the pelota, he hits the ball awfully hard.

Let’s start looking at some hurlers.

These are the pitchers that had the ball hit the softest off them last season. 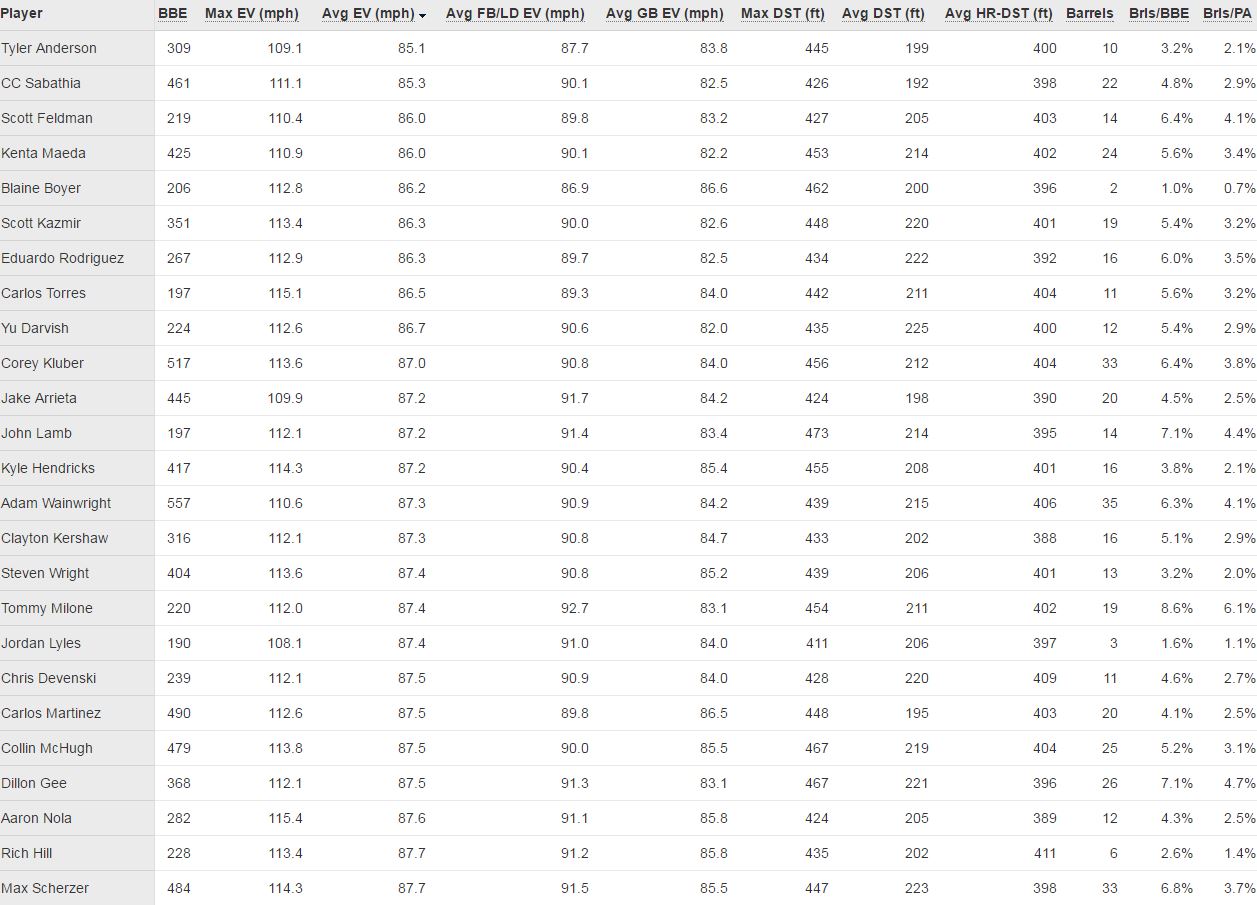 Tyler Anderson said screw you Coors Field. He was the hardest hurler to consistently square up in 2016.

Maybe CC Sabathia isn’t completely washed up after all?

Scott Feldman – I attribute this one to the following fact; Feldman throws the ball so slowly that no one can hit the ball hard off him. I’m serious. Come on, the guy lacks the skills to limit hard contact.

Kenta Maeda doesn’t have performance concerns. He has issues with his arm and his ability to be quality as the innings pile up.

Scott Kazmir and Eduardo Rodriguez aren’t going to end up on any of the Oracle’s teams in 2017. Still, both lefties were hard to consistently square up last season.

Do you even know who Carlos Torres is? Maybe you should do some digging. OK, I’ll save you the trouble. Solid skills but nothing to get excited about with the 34 year old reliever.

How impressive is it to know that John Lamb had a lower mark than Clayton Kershaw? It won’t translate into much of anything for Lamb though unless he stops walking batters (3.76 career BB/9) and learns how to keep the ball in the yard (he’s allowed an insane 22 homers in 119.2 innings leading to a career HR/9 mark of 1.65). Or how about that knuckleballer Steven Wright was hit just a tenth of a mph harder than Kershaw? Knucklers do strange things.

Carlos Martinez (87.5 mph) was harder to consistently square up than Rich Hill who, remarkably, had the same 87.7 mph mark as Max Scherzer. Still not buying Hill.

If we drop the requirement from 190 down to 100 batted ball events we get another list of arms to keep in mind on draft day. 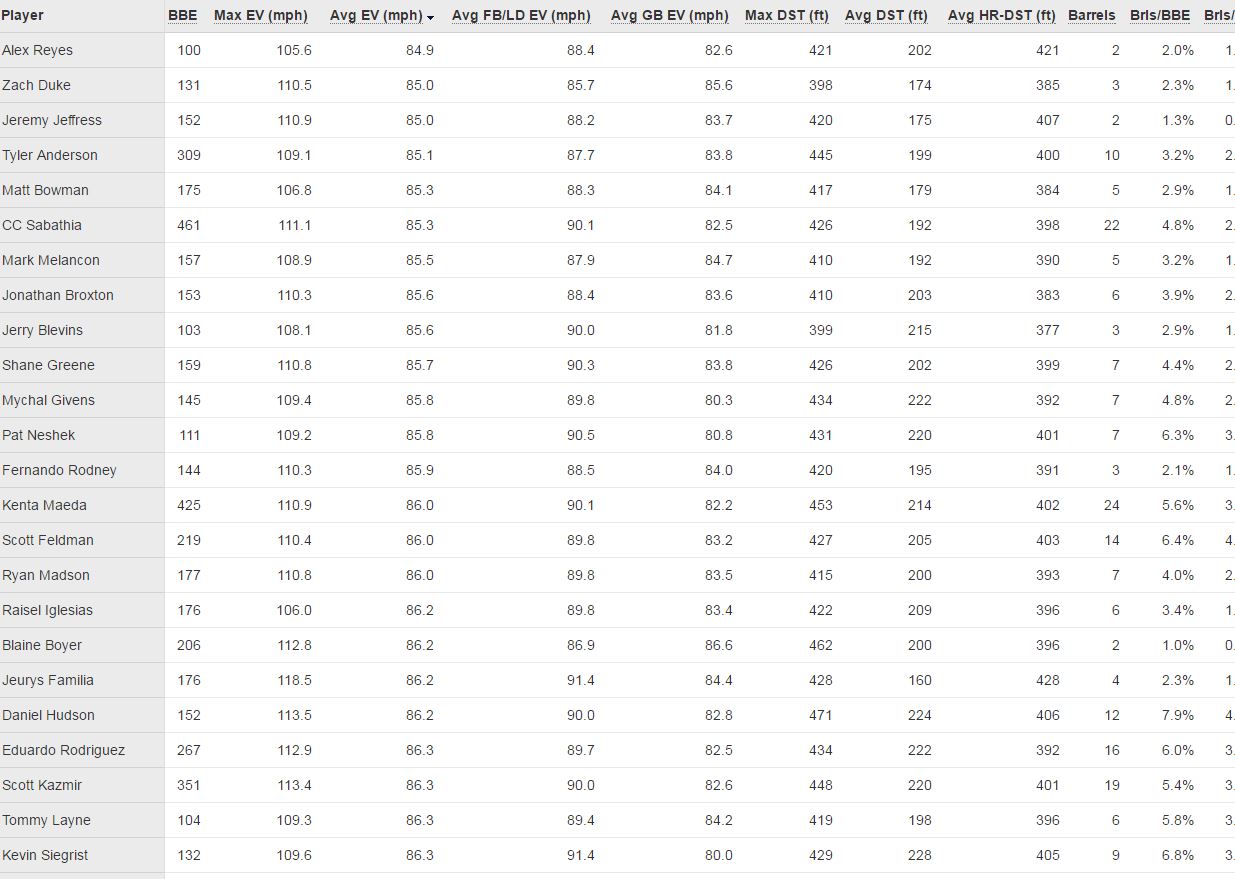 Alex Reyes could be a boss this year if the Cardinals allow him to go 180 frames. No one induced softer contact consistently than he did last year.

Shane Greene was 10th last year. Don’t forget about him, especially in league only setups. A couple of years ago he looked like a rising star.

No one squares up Fernando Rodney. Too bad that old dog ain’t gonna flash any new stripes as the veteran simply walks too many batters since he can’t control his still impressive stuff (a ghastly 5.10 walks per nine).

Raisel Iglesias could take off and be this year’s Alex Colome if the Reds let him work the 9th inning.

Here comes the list you want no part of. The following hurlers are the men who were consistently hit harder than any other in baseball. 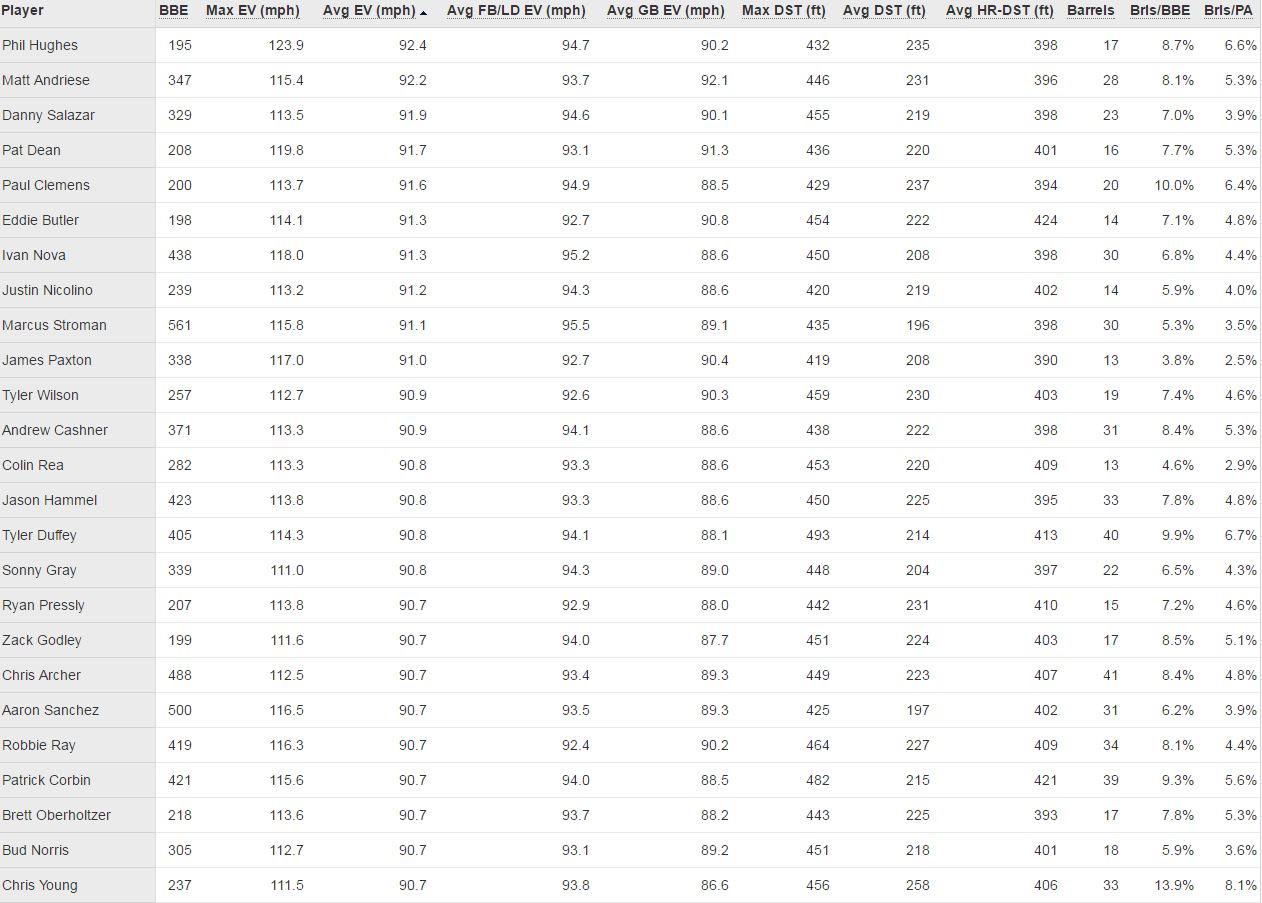 Phil Hughes throws strikes. He might throw too many. Batters know it. They hit him hard as a result.

Matt Andriese is a nice “swing” pitcher that can help in a variety of roles. He has intriguing skills, but when batters made contact last year they did some damage.

Danny Salazar keeps the ball down and he dominates. When he gets the ball up it’s happy go lucky time for batters.

There’s that name again – Ivan Nova. Seems like most of the times he is being mentioned in the Draft Guide it’s in a negative manner. He could go all Rick Porcello in 2017, but come on, it’s not going to happen. Exercise caution when others likely won’t with the Pirates’ righty.

Marcus Stroman should be much better in 2017. He falls into the Salazar category. When he makes his pitch, he’s hard to hit.

Jason Hammel can’t go 180-innings and had an ERA of nearly nine last September before he was left off the Cubs playoff roster. All season long he was hit pretty hard last year.

Chris Archer, Aaron Sanchez and Robbie Ray all checked in at 90.7 mph. All three youngsters could strikeout out 200+ batters in 2017, that is if Sanchez can jack up his strikeout rate, something I’m far from convinced he can. The other two, with health, will get to 200 in 2017, just as they did last season.