Who are the best adds this week if your current roster is letting you down? Ray Flowers discusses some potential adds off the waiver-wire. 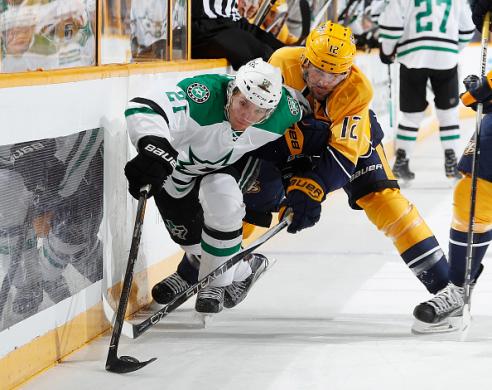 Antoine Russell has racked up 18 penalty minutes the last five games helping to pave over his (-2) rating in that time. Russell is a limited player, he’s scored 13/13/14 goals the last three seasons and has never hit 30-points, but he’s also posted 160 penalty minutes, on average, the last three years. If you need help in that category, let ‘er rip.

Matthew Tkachuk, the 18 year old with the Flames, is going to stick with the club as he’s hit the 10 games played level. He’s produced five points his last five games, including two goals his last game, and he’s been a +6 skater in that time. If you’ve been reluctant to add the rookie you need not be any longer.

Jason Zucker is skating with Eric Staal and Charlie Coyle. That’s a certain positive. The last five games Zucker has scored twice while dishing out three assists. He’s also a +6 skater in that time. He’s net to hit 16:30 in an outing in terms of ice-time, and he’s only taken four shots on net, so don’t drop a struggling but established player for him. If you’ve got a nothing/something on your roster though, you can take a look Zucker’s way.

Casey Cizikas is kinda just a guy, unless you play in a deep league in which case there might be some interest. He has two points the last three games. He has 26 hits, 15 blocks and 88 face-off wins. Do you know how many center eligible players can match all three of those numbers? The answer is none – other than CC. Hey, it’s something.

Frans Nielsen has seen his role grow with Pavel Datsyuk in Russia and Henrik Zetterberg looking less and less like the all-star we all remember. The 32 year old centerman has six points 11 games and is often seeing time on the first line. He does have a (-7) rating though, that hurts, and he only has 17 shots on net. He has scored 20-goals in 2/3 seasons, but the thing he really has going for him is the average of 2:57 on the power-play each game (he has four assists with the man advantage).

Travis Zajac has three goals, an assist, and is averaging 19 minutes a game his last five games. He is the quintessential guy you add off waivers when you need a boost. When he starts to slow, or your team improves, you drop him. Always the way it is. If your league uses face-off wins he’s a beast too. He’s averaging 10 wins a contest, and his total of 90 total wins is tied for 26th in the league.

Nikolaj Ehlers is a 20 year old winger who has produced just two points his last five games. However, note that he’s seen at least 19:27 of ice-time each of the last three games, and he’s also now skating on a line with Mark Scheifele and Blake Wheeler. Would be huge if he sticks there.

Michael Grabner scored 34 goals back in 2010-11. Since then he has vanished. Here are his goal totals since: 20, 16, 12, 8 and 9. This season the 29 year old has already scored six goals in his first season with the Rangers. He’s been particularly hot with a hat-trick, four goals total, and one assist his last three games. He’s seen moderate amounts of ice-time, over 15 minutes just once in five games, so it’s hard to get overly excited.

The Bruins play five games next week, and we never see that. Might consider Brandon Carlo who has three points and is a +9 in 10 games.

Hampus Lindholm signed a 6-year deal with the Ducks for $31.5 million. The 22 year old produced 28 to 34 points the last three seasons and is coming off a season of a career best 10 goals. Is he on waivers in your league cause he still hasn’t reported to the club? It sounds like he should be able to return next week as he works through visa issues. He’s well worth the add if he’s been dropped because he isn’t skating yet.

The Starts play three games in four days next week. Look for Peter Budaj to play three games with Jack Campbell getting the other is Jeff Zatkoff isn’t able to return from injury. Budaj has a strong 2.31 GAA even if his save percentage is lacking at .902.

Mike Condon made his Ottawa debut on Thursday against the Canucks and he tossed a bagel at the club from Vancouver stopping all 27 shots (he was acquired from the Penguins this week). Craig Anderson is dealing with his wife’s illness and it’s not clear how much time he will miss. Andrew Hammond has a groin issue and is likely to miss at least another week. Condon appeared in 55 games with the Canadiens last season with a 2.71 GAA and .903 save percentage, very moderate numbers in his first NHL campaign.

Calvin Pickard is 2-0 with a 2.50 GAA and .912 save percentage for the Avalanche. Meanwhile, Semyon Varlamov has gone 2-5 with a 3.30 GAA and .891. He’s not Mike Vernon in the late 80’s with the Flames, so those numbers don’t work. Will the ‘Lanche start giving Pickard more work if the struggles of Semyon continue?