Michael Wacha has been sent to the disabled list and to take his spot on the active roster the Cardinals have decided to promote uber prospect Alex Reyes. 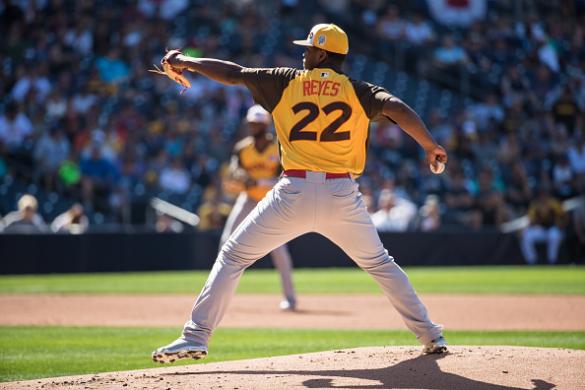 Alex Reyes is not yet 22 years old. Standing 6’3” and weighing in at 175 lbs, the righty has one dynamic wing. With the injury to Michael Wacha, Reyes will be asked pitch for the Cardinals… bullpen it appears (not out of the rotation).  Let’s break down the skill set of Reyes, which is elite, and try to get some clarity as to how he will be used by the big league club.

Here are his prospect ratings amongst all players in the game, regardless of position played.

Reyes has an elite fastball that comes in at a 75 on the 20-80 scale, and that’s an elite mark. He sits at 96-97 mph with the heater and can tickle triple digits. When he keeps the pitch low it explodes downward as it’s a very “heavy” fastball. It’s an elite pitch. Period.

The curveball is also a different maker coming in at about 65 on the 20-80 scale. It roundly described as a power curveball that can have devastating effects on batters. The 12-to-6 hammer curve is a plus/plus pitch. His 1-2 punch of fastball and curveball say that he can get hitters out in the big leagues right now. Zero doubt. Baseball America even suggested that Reyes could pull a Dellin Betances if the Cardinals chose to call him up to work out of the bullpen. He should be able to dominate right away with his two offerings.

Success as a starter long term will likely rely on how his frame hold up, and how he mixes in his third pitch, a changeup. He throws so hard that his changeup is literally as hard at Tim Lincecum’s fastball. This is a solid pitch, and he understands that using the pitch allows him to have extreme levels of success with his two dominant offerings.

Speaking of his physical nature, Alex is built like me. Nothing wrong with that of course (that’s what she said), but scouts will always have some questions with a hurler on the thinner size until he fills out of proves he can rack up innings. Luckily for Reyes he is fairly athletic and is able to repeat his delivery with consistency, even with a bit of a stiff motion and extended follow through. When he’s locked in he is a very rough at-bat.

At the same time there are some negatives here.

1 – He was suspended 50-games for marijuana use. Whatever you think about weed, the fact is it’s banned and you can’t get on the Puff on the Magic Dragon train. Concerning that he wasn’t smart enough to avoid the temptations.

2 – The 21 year old has very few innings on his arm. To reiterate, here are his innings totals.

One positive of the weed… it’s helped to limit his innings this season which means he shouldn’t have to be shut down, but still, there are no innings here.

This is a huge issue.

In 349 professional innings Reyes has walked 180 batters. That leads to a 4.6 BB/9 rate. You cannot have success as a starting pitcher in the big leagues with a mark that high. Only one pitcher in baseball with at least 100-innings pitched this season has walked more than 4.32 batters per nine, and that’s Francisco Liriano who is 6-11 with a 5.34 ERA to go along with his 5.34 BB/9 rate. Last season, only one pitcher in baseball who threw 162 innings had a mark above 3.90 (Trevor Bauer at 4.04 per nine).

In the minors where his stuff cannot be touched it hasn’t harmed his overall effectiveness too much. If he comes to the bigs not being able to locate, and there is zero data to suggest that he will all of a sudden lock-in, anything resembling consistency with Reyes seems unlikely.

Despite a need in the rotation, Reyes isn’t going to start for the Cardinals, this according to Derrick Gold and Ben Frederickson. Rick Hummel wrote the same thing as well. So all those dreams you had of adding Reyes and riding him to a championship, it’s not likely to happen.

Luke Weaver will take the open rotation spot vacated by Wacha (he will enter the rotation Saturday against the Cubs). Weaver was a first round pick in 2014 and he’s been stupendous. Standing 6’2” and weighing in at 175 lbs, the righty has made 13 starts this season with a 7-3 record, 1.30 ERA, 0.93 WHIP, 10.3 strikeouts per nine and 12 walks. Yep, less than one walk a start folks. A fly ball hurler, he’s drawn some Jered Weaver comparisons and while that is a bit scary at the moment, don’t forget that Jered was a very good pitcher for years before he lost his velocity. Luke throws 92-93 mph and augments it with an above average changeup. His curveball has been improving to the point that it’s also a pitch he can get outs on. Note that he too has no innings on his arm: 9.1 innings in 2014, 124.1 innings last season and 83 innings this year. Like Reyes though, he shouldn’t need to be shut down this season because of a current inning total that is low.

Reyes has an elite arm. Period.

He has horrible bouts of being unable to throw strikes. Period.

At least for now, he will be used out of the bullpen by the Cardinals.

That news makes him a strong addition in NL-only leagues, nothing more. If he is slide into the starting rotation he would be of immediate interest in mixed leagues, but with performance to date that mirrors Francisco Liriano you would be wise to slow play the love for Reyes… at least for now.

As for Weaver, he’s an immediate and better add in NL-only leagues than Reyes. With the trade deadline past, and Wacha continuing to have issues that are causing concerns with him long-term, it’s possible Weaver will end up starting for more than two weeks for the Cardinals. Weaver is a good add in mixed leagues for the fact he’s skilled, is pitching well, and doesn’t beat himself with the walk.

Here's a video link with the Cardinals GM breaking down the situation. 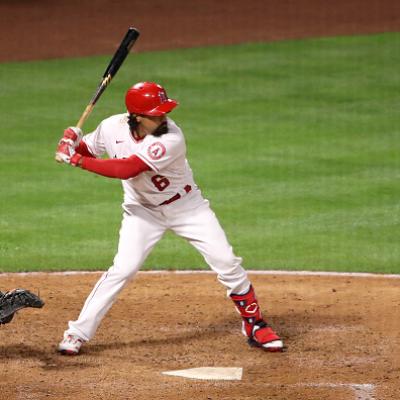 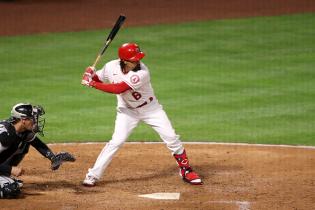 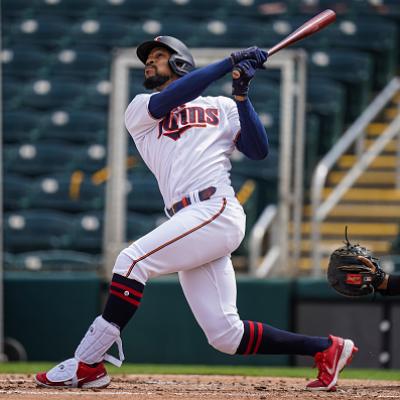 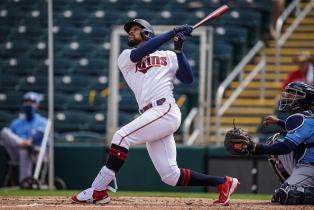 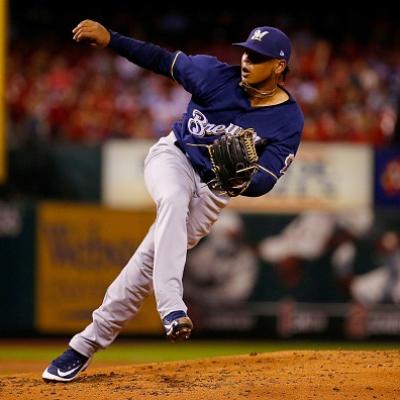 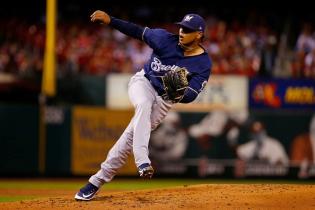 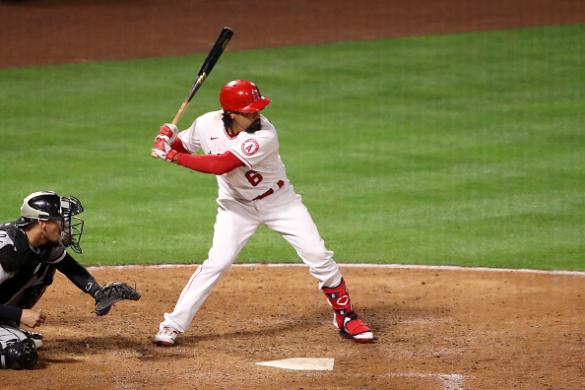 MLB Myers drives in five, homers in win over Pirates

K. Hiura - 1B
MIL1
Making the start at second base, Keston Hiura went 1-for-3 with an RBI single and a stolen base Monday against the Cubs.
Hiura also struck out and grounded into a double play, but we'll take it. The 24-year-old began the season in a brutal slump, but he's now hit safely in each of his last three games. The swing-and-miss in his game remains a concern, but it's nice to see him starting to contribute. Daniel Vogelbach made the start at first base on Monday and we could see more of Hiura at second base with Kolten Wong on the injured list.
Added 9:05 am (EST)
Added 9:05 am (EST)

J. Lowrie - 3B
OAK
Jed Lowrie drove in three runs while going 2-for-4 with a double on Monday in a win over the Diamondbacks.
There have been several feel-good stories in baseball to begin the year, and Lowrie is one of them. The the 36-year-old -- 37 on Saturday -- picked up his first RBI on fielder's choice, but the big blow was a two-run double off Madison Bumgarner that extended Oakland's lead to 3-0 in the third inning. With that double, a walk and a base hit later in the contest, Lowrie is now slashing .316/.395/.474 to begin his 2021 comeback tour. You'll always have to cognizant of injuries, but he's certainly passing the eye test to begin the campaign.
Added 1:14 am (EST)
Added 1:14 am (EST)

M. Chapman - 3B
OAK1
Matt Chapman went 3-for-5 with a homer and two RBI on Monday in a win over the Diamondbacks.
Chapman swatted a solo homer off of an ineffective Madison Bumgarner for his second homer of the year. The 27-year-old singled in an insurance run in the eighth inning. It's been a slow start for Chapman, but he's too good of a player to keep hitting .179/.267/.333 for too much longer. Fantasy managers should remain patient, even with so many quality third base options right now.
Added 1:14 am (EST)
Added 1:14 am (EST)

R. Laureano - CF
OAK1
Ramón Laureano stole two more bases while going 2-for-4 with two runs scored on Monday in a 9-5 win over the Athletics.
Laureano's two steals now give him seven on the season. That's an impressive number when you consider that the season isn't even to the middle of April. It's also a bit of a surprise -- a welcome one -- considering that he stole a total of 22 bases in his previous 225 contests with the Athletics. You can't count on this type of theft production all year, but Laureano is a good athlete who clearly wants to run in 2021. He's also slashing .323/.400/.548, which feels like burying the lede.
Added 1:14 am (EST)
Added 1:14 am (EST)

M. Bumgarner - SP
ARI1
Madison Bumgarner was charged with six runs in 4 2/3 innings on Monday in a loss to the Athletics.
It's another disappointing start for Bumgarner, and unfortunately, this is becoming more and more common. The left-hander allowed seven hits in the contest, and he also added self-inflicted damage with three free passes. The former Giants' ace has just not looked like a semblance of the pitcher that once was among the best in baseball, and he's sporting an ugly 11.20 ERA after another ugly outing. Bumgarner is not a recommended streamer for Sunday's start against the Nationals.
Added 1:14 am (EST)
Added 1:14 am (EST)

C. Bassitt - SP
OAK1
Chris Bassitt overcame five walks to allow just two runs on Monday in a win over the Diamondbacks.
Bassitt did not have his best command, and a 58-of-93 ratio of pitches landed for strikes may not tell the whole story. Still, the 32-year-old right-hander was able to keep the Diamondbacks from taking advantage -- for the most part -- and he was able to strike out four while allowing just two hits. Bassitt has not been great to begin the year and still owns a 4.96 ERA over his three starts, but this was his best effort of the year even with the free passes. He'll try and build on this on Sunday when he faces the Tigers.
Added 1:14 am (EST)
Added 1:14 am (EST)

M. Olson - 1B
OAK1
Matt Olson is considered day-to-day after X-rays on his left thumb came back negative.
Olson stayed in the game initially after being plunked in the seventh inning Monday versus the Diamondbacks, but he was eventually taken out in the eighth. The first baseman has managed to avoid a serious injury, though.
Added 12:29 am (EST)
Added 12:29 am (EST)