The rich get richer as the Blue Jays added fantasy dynamo Melvin Upton. What will his addition do to the Jays and what happens to the open roster spot in San Diego? 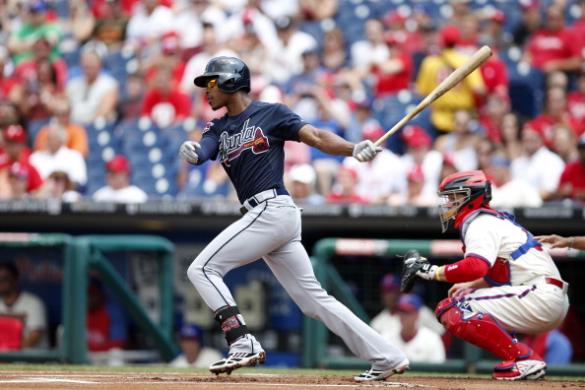 Upton is being paid $15.45 million this season and $16.45 million next year and it sounds like the Padres will cover as much as $17 million of what remains on the deal.

It’s a bit unclear exactly how things will go with the Jays. A solid guess follows.

Upton, who turns 32 next month, has been tremendous this season offering an out of nowhere level of performance for a guy who was roundly undrafted this spring. Upton has 16 homers and 20 steals on his way to his first 20/20 effort since the 2012 season, this after three years of dreadful work. However, he’s hit .237 in July to drop his average to .256. Barely a league average number. His 6.1 percent walk rate is a career worst, as is his 0.22 BB/K rate. The average isn’t likely to go up. He has a 19.3 percent homer to fly ball ratio which is a career best number. It’s also double the mark he posted the last three seasons. His career rate is 12.1 percent by the way. The average is likely to dip. The power is likely to dip. The move to Toronto will likely lead to a reduction in steals. This trade is bad news for Upton.

The Jays usually run out Michael Saunders in left, Kevin Pillar in center and Jose Bautista in right field. The club could move Edwin Encarnacion to first base full time, bench Justin Smoak, and get Upton in the lineup nearly daily, but that seems like a bit of a stretch after Smoak just signed a 2-year extension. Still, Smoak is the worst hitter mentioned here and is, at best, a platoon option. He could lose a lot of playing time, though Upton will also lose playing time.

Saunders has a 1.012 OPS against lefties and an .883 mark against righties. Still hard to think he doesn’t get hurt, but how do you bench that? Saunders has a .934 OPS in July.

Pillar plays great defense, though his offensive game has holes. He has seven homers and eight steals which doesn’t impress anyone. Ditto his .265/.295/.391 slash line. He could certainly lose some work to Upton.

Bautista has been activated from the DL after missing five weeks with a toe injury. He will return to batting leadoff for the Jays. He should be who he always is.

It seems like Upton will benefit from a new home park but lose some playing time. There’s also a strong possibility that Upton won’t run as much in Toronto as he did in San Diego. The move is likely and negative for Saunders, Pillar and Upton. The only one who won’t likely lose anything in the outfield will be Bautista – as long as he is healthy of course.

THE FALL OUT – PADRES

One would assume that with Upton out of the mix either Manuel Margot or Hunter Renfroe would be called up and likely Renfroe since Margot is dealing with an Achilles issue. Alas, it’s not going to happen according to Padres’ GM A.J. Peller. It sounds like we might not see either until September. Read that again. The Padres general manager said that neither elite outfield prospect will not be promoted for at least another month. Sorry, deal with it.

So what do the Padres do in the outfield? Matt Kemp and his 22 homers and 67 RBI will play daily (duh). That leaves a group of three guys to fill the two other spots until the prospects are promoted.

Jon Jay is on the disabled list with a forearm issue (he broke his forearm after being hit by a pitch on June 19th). He hopes to return at some point in early August. Jay is what he is, solid but nothing more. Through 68 games he hit 24 doubles with a .296/.345/.407 slash line.

Travis Jankowski has a mere 161 plate appearances this season with a pathetic .231 average and .313 SLG. However, the youngster is getting on base with a .352 OBP and that has allowed him to score 25 runs while stealing 16 bases in limited work. His fantasy outlook goes way up with this deal if for no other reason than he should continue to push his steals upward. He’s not a very good hitter, no doubt about that, but as a part-time player his 16 steals place him in a tied for 6th in the outfield. Still, he’s not worth using even if out there against lefties (.339 OPS this season and .449 in two abbreviated seasons). If he’s on waivers, because of the speed, he shouldn’t be.

Rodriguez is a 6’2” right hander who has a fastball that can hit 97 mph. The Dominican born righty has an elite fastball but his secondary pitchers are certainly below average. Just 19 years old, and having yet to pitch above rookie ball, he’s a strong arm prospect who is years away.

R. García - 2B
NYM
Mets claimed INF/OF Robel Garcia off waivers from the Reds.
Garcia was claimed off waivers from the Cubs back in July, though he didn't end up appearing in a game with the club. The 27-year-old broke out between Double- and Triple-A in 2019, batting 284/.369/.586 with 27 homers over 98 games. Garcia never really hit for much power prior to that and his production largely failed to translate during his first stint in the majors last year, but he has experience at multiple infield spots and even played some left field in 2019. He could be a utility player option for New York.
Added 1:55 pm (EST)
Added 1:55 pm (EST)