Who will the Indians use in the outfield? Who is the 5th SP for the Mariners & the Phillies? What are the Orioles doing with all five of their starting arms? What are the Mariners doing at first base? Will veterans Quentin/Swisher find a spot on g big league roster this season? 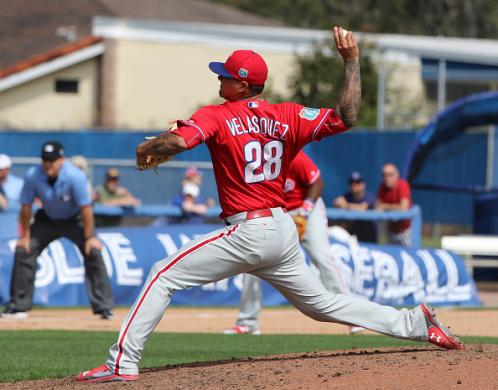 Allen Craig has been sent to minor league camp by the Red Sox. After suffering a Lisfranc injury to his foot in 2013 he’s simply never been the same. He’s yet to turn 32 years old, and has two seasons of hitting .300 with 90 RBI in the last four seasons, but he’s also hit just nine homers with a .206 batting average his last 540 at-bats over two seasons. Such a shame.

The Indians made a lot of moves Monday. Here’s what we’ve got to work with. Lonnie Chisenhall has been placed on the DL with a forearm issue. Luckily the team signed Marlon Byrd who they will desperately need with Abraham Almonte out 80 games for a PED suspension and Michael Brantley starting the year on the DL cause of his shoulder. Don’t forget that Will Venable was just released too – an odd move considering everything that is going on with the club (he signed with the Phillies Monday). It’s going to be a rough April for the Indians who seem likely to go with Byrd, Tyler Naquin. Collin Cowgill and Rajai Davis in the outfield. Yikes.

Nate Karns has been named the 5th starter for the Mariners as he beat out James Paxton who was sent to Triple-A to continue starting. Paxton had a 10.80 ERA this spring after being beaten around the yard for seven runs over just four innings Sunday. You know I’ve got you covered. Here is the Karns Player Profile.

Scott Kazmir and his 7.71 ERA should be starting for the Dodgers this Thursday. Never been a fan, you should know that by now.

Sean Manaea is dealing with a foot issue right now, nothing major, but he’s not going to make the Athletics. Might not see him until the second half but he’s got a great wing that has his future pretty bright.

Jesus Montero, who is out of options, was designated for assignment by the Mariners. He will no longer remain with the organization though as the Blue Jays took a chance and claimed him off waivers. Montero hit .237 with 12 strikeouts this spring not exactly engendering faith from the club. The Mariners chose to keep Dae-Ho Lee instead of Montero. Not surprising really. “[Lee] has a history of hitting left-handers and I think he has given us reason to believe in spring training,” GM Jerry Dipoto said. “He’s very prepared, very calm in the batter’s box. He’s gotten better every step of the way as we’ve gone along and it’s been a pleasant surprise, the defensive and especially the base running.” Lee will hit against those lefties this season which is imperative given that Adam Lind, the starter at first, cannot hit them at all.

The Orioles pitching staff is in such bad shape that Chris Tillman has been named the Opening Day Starter which is likely better than the other option – Ubaldo Jimenez. The top-4 will be rounded out by Yovani Gallardo and Miguel Gonzalez, and by mid-April the hope is that Kevin Gausman’s shoulder will be good enough for him to be the 5th starter. An uninspiring group to say the least in Baltimore.

The Phillies have demoted Adam Morgan to Triple-A leaving Vincent Velasquez the winner of the rotation derby for the fifth spot. VV throws hard as PITCHf/x had his heater at 94.5 mph last season as he

struck out 58 batters in 55.2 innings for the Astros. Solid. However, pretty concerning that his fly ball ratio last season was 47 percent. That’s an obnoxious number. Last season he was fortunate to have allowed only five homers in 55.2 innings thanks in no small part to his 7.1 HR/FB ratio that is likely to go well up in 2016. Keep an eye on the big flies.

Carlos Quentin has been released by the Twins after a productive spring (2 HRs, 7 RBIs, .833 OPS). The Twins Terry Ryan told reporters that he felt Quentin would retire if he doesn’t get a major league deal with another club.

Nick Swisher has been released by the Braves. They tried to move him but no one, duh, was willing to pick up his $15 million salary for the 2016 season (the Braves are paying $10 of that with the Indians picking up another $5 million). Swisher hit just .196 last season with a pathetic .320 SLG but, as usual, he still got on base with a .312 OBP. Someone will add Swisher but at this point, yeah you know. It’s looking like a ignominious end to an otherwise impressive career.

J. Wilson - RP
FA1
Jon Heyman of MLB Network believes that the Mets may turn to Justin Wilson after failing to sign Brad Hand.
The Mets were considered serious contenders -- at one point possibly the favorite -- to sign Hand at one point, but reports indicate that he'll be heading to Washington and the Nationals. Wilson appeared in 68 games over the last two years, and he registered a 2.91 ERA and 67/28 K/BB ratio in 58 2/3 innings. He'd be a bridge to Edwin Diaz if he did return to the Mets.
Added 8:40 pm (EST)
Added 8:40 pm (EST)

B. Hand - RP
WSH1
Jeff Passan of ESPN reports that the Nationals have signed Brad Hand to a one-year, $10.5 million contract.
As Passan points out in the tweet, he gets more than the $10 million option that Cleveland declined at the end of the 2020 season. Jesse Daugherty notes that the deal is pending a physical, and does not contain any options. The left-hander will serve as the stopper for the Nationals after leading MLB in saves in 2020 with 16, and he posted an excellent 2.05 ERA, 0.77 WHIP and 29/4 K/BB ratio in his 22 innings over the truncated campaign. He'll be a strong fantasy option in 2021, and the most reliable closer that Washington has had in a while, with all due respect to the other options they've had.
Added 7:31 pm (EST)
Added 7:31 pm (EST)