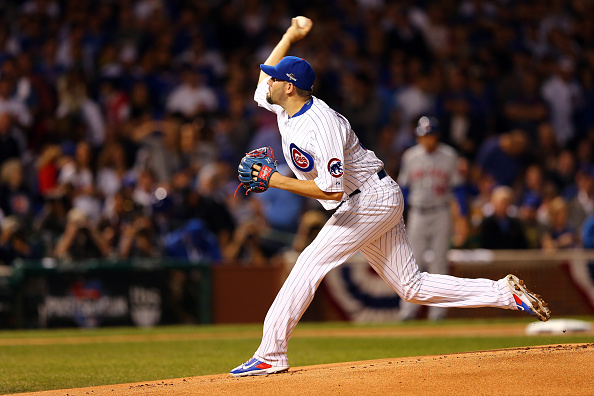 Jason Hammel is a 33 year old righty of the Cubs. He’s got no heat behind his name despite the fact that he posted a 1.16 WHIP last season, the 12th best mark in the National League. Let’s take a deeper look at the vet so we can properly assess his value for the coming season.

Hammel has been in the big leagues for a decade.

Do you know how many times he’s thrown 180-innings? ZERO

Jason Hammel has never hit 180-innings pitched. That concerns me. Doesn’t it concern you? He’s proven unable to throw a full season of frames. He just can’t do it.

At least he’s consistent. You know what you’re getting, and it’s not 180 innings.

Much like the innings pitched numbers from above though…

Just some food for thought.

Hammel has a strikeout rate of 7.05 per nine for his career.

The league mark since he began his career is 7.18 per nine.

However, we’ve got some interesting data here.

In three of the last four seasons he’s been a batter above his career rate with a K/9 mark over eight. Alas, the time he missed out was his 6.20 mark in 2013. That up and down is a bit concerning. It’s also concerning that he struck out more than a batter per inning last season for the first time. Ask yourself a simple question. How many pitchers add a full batter to their K-rate in their 10th season? I’ll answer for you. No one does.

For his career Hammel has an 8.6 percent swinging strike rate. In three of the last five seasons he’s been better than that mark. In Three of the last six seasons he hasn’t even been at 7.5. The league average is about 9.5 percent so it’s pretty clear we have some volatility yet again. It should be noted that the mark has been 9.7 and 10.9 percent the last two seasons. Last season was his first effort, over 120 innings, in which his swinging strike rate was over 9.6. Again, pretty odd to expect him to hold on to the rate he has last season.

Hammel did induce a swing on 34.1 percent of the pitches he threw outside the strike zone last season. That’s four percentage points above his career best. He also changed up his pitch selection. In 2015 he threw his fastball 53 percent of the time. He had never thrown the heater less than 59.1 percent of the time before. He also upped his slider rate to 35.9 percent, the highest mark of his career. Moreover, he had never thrown his slider more than 22.4 percent of the time heading into 2014. The last two seasons he’s jacked up that slider rate to 32.0 and 35.9 percent. Those are huge totals. In fact, the only two men who threw their slider more than Hammel last season where Tyson Ross (44.9 percent) and Chris Archer (39.1). The slider helps with strikeouts. It also helps to destroy arms. Given Hammel’s inability to pile up innings, I can’t look at his slider usage and think he’s suddenly going to last 200-innings in 2016.

The first three seasons of his career he walked more than four batters per nine.

His career has been a roller coaster of the walk. He’s also coming off the best mark of his career, again in his 10th season. Most guys don’t do that. Oddly, he threw 45.1 percent of his pitches inside the strike zone last season and though that’s a four year high it’s still below his 47.1 percent career rate. Odd he would walk fewer batters while throwing fewer strikes, isn’t it? He did throw more first pitch strikes than ever before at 60.9 percent (career 57.6 percent). The mark had been 57.5 percent or lower the previous three years.

Three times in four seasons Hammel has posted an ERA under 3.75 including the last two seasons. He’s also the owner of a career 4.49 ERA and that includes a 4.97 mark in 2013. On the surface that doesn’t bode well for Hammel but his overall skill set is pretty strong and actually supportive of the ERA he’s posted the last two seasons. Don’t take my word for it. Just check out his SIERA (3.50 and 3.45) and xFIP (3.57 and 3.47) marks the last two seasons. Hammel has been better, his whole game has, and the ERA’s are probably more legit than not.

After a career best 53.2 percent ground ball rate in 2012 his ground ball mark has gone down each season: 40.1, 39.7 and 38.3 percent. The 38.3 percent mark last season was a career low. His fly ball rate was slightly up at 37.2 percent compared to his 35.0 percent career mark. The league average is about 34 percent, so he’s pretty much an average option here. He does allow the fly ball to become a homer a bit more than normal. In fact, each of his last three seasons the mark has been in the 12 percent range. That has led to a HR/9 mark of at least 1.17 in each of his last three campaigns. His career mark is 1.10 per nine. He’s unlikely to see a drop in this category in the coming season.

Hammel has a 21.2 percent line drive rate for his career. He’s been above that mark each of the last three seasons including the 24.5 percent mark he posted last season, a career worst. Despite so many line drives his BABIP was only .288 which is below his .303 career mark. So he posted a terrible line drive rate yet had a BABIP that was lower than the league average. That’s not easy to do. He also posted the highest hard hit percentage over the last eight years. He still had a .288 BABIP and his .242 batting average against, well below his career .269 mark. Huh.

Don’t forget to pick up your copy of the 2016 MLB Draft Guide which includes more than 600 Players ranked, auction values, rookie reports, hitting and pitching targets as well 30

proven strategies from the experts to help you win in the coming season.

10-team Mixed: Sure, why not. Not elite. Not getting better. Not taking any steps. He’s also unlikely to flat out tank as well. Round out the staff with him. Target him? Depends on the cost. If he’s going off the board as an SP6/7, let ‘er rip.

12-team Mixed: I’m thinking SP5/6 here. I would bet if you’re not back east that you could roster him at that level with little issue. However, if you are back east you might have to overpay. If you do, I would recommend not. Solid skills as you’ve read about, but concerns as well.

15-team Mixed: Ratio protection isn’t a bad thing at all in leagues this size (we’ve all ended up rolling out Trevor Bauer or Jonathan Niese and watched their middling performances harm your club’s ratios). Hammel should be able to avoid that pratfall.

NL-Only: Hammel isn’t likely to hurt you in the ratio categories, and that’s a big key in league specific setups. I’m not all in with the strikeout total, but a return to his 2014 levels would still leave him as a solid play in that category as well.

To see where Hammel ranks take a look at our 2016 Rankings that are part of the MLB Draft Guide.