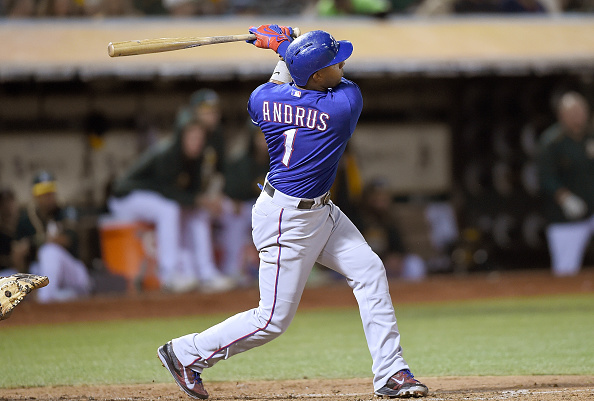 I’m going to make a statement that no one is going to agree with. I’m fine with that. The last seven years there hasn’t been a more consistent offensive performer at shortstop than Elvis Andrus. There hasn’t been. Do me the honor of allowing me to explain that statement before you write it off as the ramblings of a madman.

Andrus has scored at least 69 runs each of the last seven seasons. There are only six other players in baseball that can match that run. None of them is a shortstop other than Andrus.

- In each of his seven seasons Andrus has struck out between 74 and 97 times. #Consistent

See what I’m saying about Andrus being the most consistent shortstop the last seven years?

- In each of the last six seasons Andrus has walked between 46 and 64 times. #Consistent2

- The last five years – cheating a bit – Andrus has driven in at least 60 runners in 4-of-5 seasons. Over those five seasons he’s averaged 58.4 RBI. Again, consistency.

THIS ONE IS DIFFERENT

As you can tell, this Player Profile is different than most of the ones that I pen. The reason, I hope, is obvious. Andrus is consistently the same performer. It’s not elite, it’s not exciting, it’s not league winning. He’s just bloody consistent.

Don’t forget to pick up your copy of the 2016 MLB Draft Guide which includes more than 600 Players Ranked, auction values,

10-team Mixed: Andrus is consistent and does steal bases. We’ve established that. At the same time, there’s nothing in the batting average and homer categories, he’s not very accomplished in RBI either, so in a league as shallow as this one Andrus may not help you enough. Think of him as more of a middle infield play to get those steals you’re searching for.

12-team Mixed: I’d be content with him as my shortstop in this format. His average won’t hurt, and though his production took a bit of a downturn last season Andrus won’t turn 28 until August so it’s very reasonable to expect him to gain that little bit back to return to who he has always been. I’ll build my roster at other spots and then pounce on Andrus when he’s the best guy left at the position without a worry.

AL-Only: Steals matter even more here. That alone gives Andrus tons of value. I also consider consistency to be a huge factor in league specific setups. Note also the health factor that was mentioned above. Stability should be a key term every league specific player remembers on draft day. Andrus has that in spades.

To see where Andrus ranks amongst other shortstops take a look at our 2016 Rankings that are part of the MLB Draft Guide.