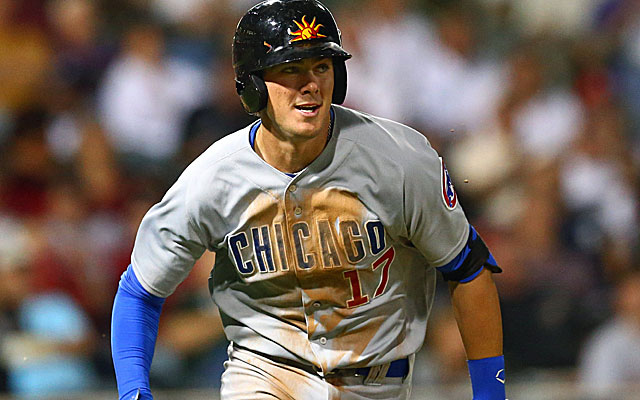 Elvis Andrus hit a homer against the Angels Tuesday. It went about... 1.3 miles. Wow. For a guy with little power did he ever crush that ball. For his 2015 outlook see his Player Profile.

Everyone loves Kris Bryant. I get it. But consider some facts with Bryant. (1) He has no big league at-bats. (2) He's only appeared in 70 games above Double-A. He struck out 85 times in those 70 Triple-A games last season. (3) The ADP info from the NFBC shows that Bryant is up to 9th at the third base position with an ADP of 102.5. He's been taken as high as 17th overall. Sheer non-sense on the last data point. (4) Some context. Here is how the #1 fantasy rookie coming into the last five seasons produced that year.

Best I can tell, here are the rookie single season records for third basemen.

Yoenis Cespedes Player Profile... do yourself a favor and read it before you roster him in 2015.

Chris Davis has 295 RBIs the past three seasons, the 4th most in baseball. Mike Trout has 291 RBIs.

Would you want to eat chicken... that was grown in a test tube?

Jung Ho Kang had two more strikeouts Tuesday and is now 3-for-27 with 11 whiffs this spring. Hello Triple-A?

Jon Lester is dealing with "dead arm." He is expected to throw 60 pitches in a minor league game Thursday, and is set to make a start next week in the minors as well. The team expects him to be healthy enough to start on Opening Night. Certainly seems possible, but his current health situation is a bit concerning. It's also not too often that a guy has his best season in his 9th year in the league.

How fantastic is it to turn on MLB Network and to see Spring Training games? #JustSaying

Can Michael Morse get it done in his first year in Miami? Matthew Beck gives his thoughts.

Brandon Moss has 75 homers the past three seasons. That's one more than Paul Goldschmidt and Albert Pujols. How crazy is that?

Hector Olivera signed a 6-year, $62.5 million deal with the Dodgers. What the hell are the Dodgers doing? I know they have more money than Fort Knox, but seriously? They brought in Howie Kendrick to play second and Jimmy Rollins to play shortstop. They spent big to add Alex Guerrero last season and his contract states that he cannot be sent to the minors this season. So the Dodgers go out and bring another guy into the mix? The Dodgers have Juan Uribe and Justin Turner to play third, and maybe the Dodgers aren't comfortable with that, but shouldn't Guerrero get a shot at that spot if Uribe/Turner fail? As for Olivera, he's 29 years old - he will be 30 in April - and has hit .323 with a .912 OPS over 642 games in the Cuban National Series. Yeah he can hit. For now he's not worthy of a mixed league roster spot, but given that he could take over at third base at some point you had better be rostering him in NL-only leagues.

How flipping huge is this Ray? Wow.

Hunter Pence is going to start the year on the DL with his broken arm. That's a huge loss for the Giants and for fantasy owners. Pence has scored 284 times the last three seasons, the 6th best mark in baseball.

Andrelton Simmons had a homer Tuesday and he's hitting .467 with 12 RBIs in 30 spring at-bats. He's gonna be in the lineup on a daily basis, his glove is stupendous, but it's open to debate where he will hit in the order. It's looking like it might be in the bottom third with a guy like Eric Young Jr. at the top and Nick Markakis hitting second for the Braves. Simmons is a decent middle infield option in 12 team mixed leagues, but he's much more intriguing as a starting shortstop in NL-only leagues.

Koji Uehara (hamstring) may or may not be ready for Opening Day. Look for Edward Mujica to get some early save chances in Boston. Oh, by the by, this is why we've had Koji so low in the Fantasy Alarm Rankings this season. His body is starting to break down as he approaches 40 years of age (he'll get there in April).

Spencer Silva breaks down the top-5 speed threats in the minors.

Rick Wolf takes about a salary cap game you can play with Head2HeadS Sports.