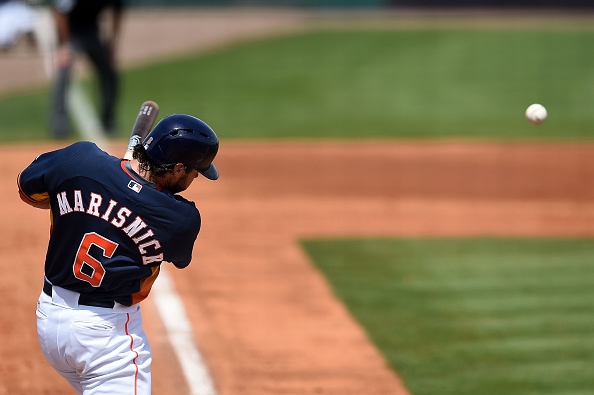 People are excited about Michael Saunders, provided he is healthy (he continues to get glowing reviews for his comeback from knee surgery. It's understandable that people feel that way (see his Player Profile). In Jake Marisnick we have a player who is very similarly skilled yet one that fewer people are talking about. Let's see if we can fire up the hype train for the Astros' outfielder.

2009: Drafted in the third round by the Blue Jays.

2014: Began the year with the Marlins but was dealt to the Astros on July 31st (with Francis Martes, Colin Moran and 2015 compensation draft pick to the Astros for Austin Wates, Jarred Cosart and Enrique Hernandez). He appeared in 65 games batting .249 with three homers and 11 steals over 221 at-bats.

Marisnick will turn 24 on March 30th. He stands 6'4", weighs in at about 225 lbs, throws/bats right-handed, and he was voted by Baseball America as the best athlete in the Blue Jays system each year from 2009-11. He was never an "elite" prospect in terms of being labeled as a "can't miss" type, but when you're a top-100 overall prospect in baseball, let's be honest, you're still looked at as an elite prospect. No one is talking about Marisnick right now  and I think that could be a mistake.

Through two seasons we haven't seen much from Marisnick. The numbers underwhelm to say the least. Here they are.

That's not good. But heed what was written above. Here's what we do know.

(1) Marisnick is a terrific athlete.

"He's a terrific outfielder, and you can really tell how much ground he can cover in center field," manager A.J. Hinch said. "I've given him every rep in center field when he's played. Marisnick's done nothing but positive things in the outfield. In fact, Marisnick is the best defensive outfielder on the Astros and would really solidify that side of the game if starting in center field. The comparisons to Carlos Beltran are evident as well (a smooth stride and effortless athleticism).

(2) He has long been looked at as an upper echelon prospect. Just look at the rankings listed above.

(3) His bat may not be ready for prime time, but his wheels are. "This spring, the biggest thing I'm working on: putting together complete at-bats. Not just getting up there and swinging but being able to control the strike zone."

He had success whether it was a righty or lefty on the bump.

You have to be a huge fan of that consistent work no matter who was on the bump.

During those 395 games his strikeout rate was 18.2 percent. In this day and age we'll take that. Per 500 at-bats we'd be talking about 91 strikeouts.

Unfortunately he didn't walk much with a walk rate of 6.4 percent. Per 500 at-bats that rate would lead to 32 walks. That's awful. It's also one of the main reasons there is concern about his ability to produce a strong batting average (he's been even worse in the big leagues with a total of 14 walks over 355 plate appearances).

Speed is an aspect of Marisnick's game that frequently shows up. He stole 97 bases in 126 attempts since 2011, a success rate of 77 percent. Per 500 at-bats we are looking at an average of 31 steals.

This is the big issue with Marisnick - how much playing time will he receive? The addition of Colby Rasmus was a big blow to Jake's chances of being an every day player. The Astros will play George Springer every day, we know that, likely in right field. You would have to think that Rasmus left field most days, at least when there is a righty on the bump (Rasmus could play CF if need be). That means Marisnick is battling with the spring training star (Robbie Grossman), L.J. Hoes and Alex Presley for time in the outfield. It's not that Marisnick isn't the most talented, he certainly is, but with so many other hats in the ring it's hard to predict how the playing time will shake out. There's also another issue to factor into the mix. If Jonathan Singleton wins the first base job that means Evan Gattis and Chris Carter would share DH and time in left field. If that were to happen there simply would be no spot in the daily lineup for Marisnick.

It's feasible to suggest that Marisnick could have anywhere from 250 to 500 at-bats, and that uncertainty is one of the main reasons that no one is talking up Marisnick in the fantasy game.

In the lead of this piece I compared Marisnick to Michael Saunders. As a review of Marsnick's skills shows, there are plenty of reasons why looking at the two players side-by-side makes sense. Both guys have decent pop and can steal a bag. Both also have concerns about batting average dragging down their fantasy value. In terms of public consciousness though, folks overwhelming seem to prefer Saunders. According to Howard Bender's Mock Draft Army Saunders has and ADP of 293. What about Marisnick? How about 356. I can't sit here and say that Marisnick will get enough playing time to outperform Saunders, but I can say if there is a 60 pick difference between the two in terms of cost that I would happily roster Marisnick as a bench outfielder in mixed leagues and hope for a significant workload from the Astros. A lot would have to go right for Jake, but a season of 10-15 homers and 20+ steals could certainly happen if the Astros gave him consistent playing time.

10 team lg: Too much concern over Jake's playing time to even consider drafting him unless the Astros commit to using him as their daily center fielder. Even if they do, hard to make a case in a league this shallow that he has to be drafted.

12 team lg: A reserve round add if you have a strong top of the outfield and you feel good about your roster. He's more of a luxury than a target in this format so only take him if it seems like everything is locked down.

15 team lg: Still nothing more than a bench add, but one with an intriguing upside. He's best served as the last player on your bench or the first guy to add off waivers if an injury strikes.