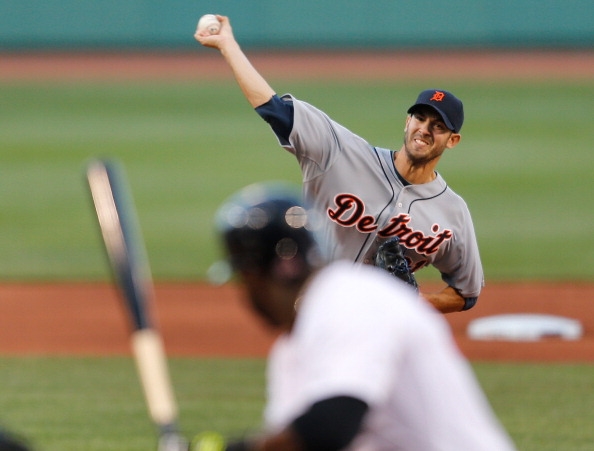 Rick Porcello gets grounders. He's got a ton of experience. He throws a good deal of innings. Other than that, I really don't see what all the fuss is about him in the fantasy game. Maybe I've misjudged Rick so I decided to put together this Player Profile in order to let the data lead me to the correct position with the righty of the Red Sox.

I'll just start with the most obvious statement in this piece. Porcello is a better real world arm than he is a fantasy option. Oh let me count the ways. We'll go step by step.

With all the injuries befalling pitchers on a daily basis (see this Around the Horn video) having a pitcher you can count on to take the ball is pretty important. Porcello does that. Well, he does and he doesn't.

Each season of his six year career, he's just 26 by the way, Rick's lasted at least 162.2 innings. Is that really that good though? I'll answer - no it's not. How many times in six seasons has he thrown 180-innings? The answer is just twice. There are 50 men in baseball who have hit the mark at least four times in the last six years. Porcello has thrown a total of 558 frames the last three seasons and that is 30th in baseball, but again, only once in three seasons has he hit 180-innings pitched.

Yes his ERA was a run below his career mark last season. Was it "earned"?
Not if you believe the advanced pitching metrics.

There wasn't any obvious growth that spoke to the drop in ERA, at least nothing outstanding that would become an "ah ha!" moment, though maybe a new pitch did have something to do with it (see more below).

Porcello did cut his walk rate to a career best 1.80 per nine last season, and that's a big key. He's always been killer at avoiding walks though with a BB/9 mark of 2.21 for his career.

His BABIP was .298. That's batter than his career rate of .310 and a five year low, but it's only .012 points off his career mark and well within the normal range of variance.

Last season Porcello had a 22.0 percent line drive rate. That's above his career 20.2 percent mark, and it's also the second worst mark of his career. It's also an extension of his recent work. The first three seasons of his career batters had a line drive mark of 19.0 percent or lower. The last three seasons the mark has been at least 21.1 percent. It's rare that a guy who give up more liners and see his performance improve.

A ground ball arm of renown, Porcello had his best season with the worst ground ball rate he ever posted. The mark was still solid at 49.0 percent mind you, but it's very strange to see the number regress and see his performance overall improve. Very odd.

As you might have surmised after that last tidbit, Porcello allowed a three year high in the fly ball column with a mark of 29.0 percent. That's just a tick over his 27.6 percent mark, but way above the 23 percent rate he posted in 2012-13. It's still way below the league average of about 34-35 percent, but given the overall skills that Porcello owns a lower mark is certainly better.

For his career Porcello has struck out an average of 5.49 batters per nine innings.
Since 2009 the AL K/9 rate has been 7.24.
He's been worse than the league average.

Not only has Porcello been worse than average in the strikeout column, he's actually been deficient as in horrible. Once in six years has he struck out 5.70 batters per nine innings, a mark that is a batter an a half below the league average since he started his career. That's just terrible. Let me be clear here. He's horrible in the K department. Last season, in 204.2 innings, he struck out 129 batters. David Price (271) and Corey Kluber (269) doubled that mark. Moreover, there were 84 pitchers who had more strikeouts last season --- eighty-four.

Porcello brings nothing in this category.

The two-seam fastball is a pitch that Porcello threw about 45 percent of the time from 2010-12 according to PITCHf/x. In 2013 he lowered that mark to 39 percent. In 2014 it went down yet again to 30 percent. That's a significant reduction. It's also worth pointing out that the less he threw the pitch, the more effective it has become. Check out the batting average against on the pitch the past four seasons: .340, .310, .300 and .268. By the way, he threw his four-seam fastball 29 percent of the time last year, right in line with his 28 percent career mark.

Porcello made up for the lost fastball by starting to throw a curve ball the last two seasons, the two best of his career by the by. The curve has been deployed 16 percent of the time the last two seasons, and in 2014 it was a real go-to pitch as batters hit a mere .208 off it with a .507 OPS. The addition of the pitch has certainly helped lead to his success the past two seasons.

Just 26 years old, Porcello is well on his way to a long an potentially distinguished career. At the same time, we have to understand what that means in terms of his fantasy value. The totality of his career at this point suggests that his outlook in the ratio categories isn't much better than average either, even with last years' gains, so what are we left with in Porcello? We're left with an arm to round out a fantasy staff, not one to build around. With no saves and little in the way of strikeouts Porcello is, at best, a three category performer in standard 5x5 leagues.

10 team lg: With victories being variable, and little in the way of strikeouts, Porcello is merely a plug and play option in the right matchups, a streamer type.

12 team lg: There are plenty of guys like Mike Leake and Kyle Lohse who bring value at the right point, and that's where Porcello fits in as well. He's a bottom of the rotation arm, little more.

15 team lg: Porcello is going to be run out there 30 times by someone in this format. If he holds on to the ratio gains from last season he will be alright, but if they inch back up...

AL-only: Certainly worth rostering, even with his limitations. Heed the issues that were noted though and be sure not to over-invest.