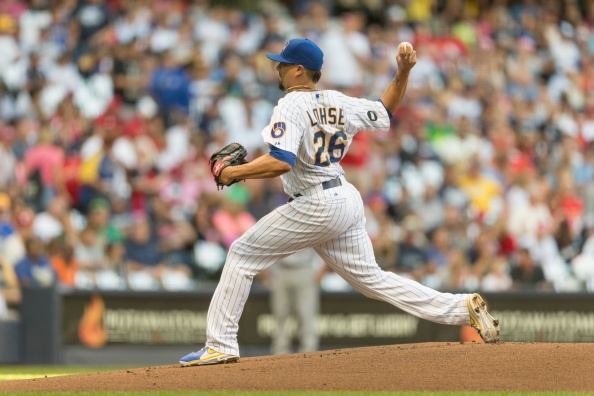 Most folks probably see the name Kyle Lohse and wonder - 'why is the Oracle wasting his time on that guy since I've never even considered drafted him until the reserve rounds?' But that's the beauty of Lohse - his cost. No one cares about Lohse, no one targets Lohse, and that means Lohse just might be the perfect end-game grab in mixed leagues. Let me explain.

I won't bore you with 15 years of big league seasons. Instead I'll list his career numbers for the two distinct periods of his career.

So why did Lohse get "good" at age 33 years old with so much work under his belt? The first place to look is his pitch usage. Did he change the way he attacked hitters? Yes.

He threw the pitch 59.2 percent of the time in 2010. Each year since the number has gone down.

Lohse changed how he attacked batters. It's working. Better than you would think I bet.

Here is where Lohse ranks, amongst all pitchers, the last four years (minimum 600 innings).

Lohse has walked 1.82 batters per nine innings. Only seven men in baseball have been better.

Admit it... you're impressed.

If you aren't, you should be.

You would be hard press to find more than a handful of hurlers who can match that consistency.

So what's the negative for the 36 year old who clearly knows how to pitch?

First off, just noted it. He's 36 years old. Each fella only has a certain number of bullets in the ole chamber.

Second, and I've avoided this extremely important factor to this point to make a point about his overall game, he just doesn't strike anyone out. That might be a bit less of an issue in points leagues, but it's a killer in rotisserie leagues. The last time that Lohse recorded seven strikeouts per nine innings was... well, never. He's yet to have a single season in which his strikeout rate matched the big league average. Just not happening. A brief glimmer is that his 6.40 per nine mark last season was his highest total since 2006 and the second best mark of his career. He's also struck out at least six batters per nine in two of his last three seasons, the only times in the past eight years that he's hit the mark of six. So for Lohse he's doing very well. Against the league average he's doing very poorly as he's never had 145 strikeouts in a season. Heck, even a guy like Roenis Elias had more strikeouts (143) last season. Lohse did come in 66th in baseball in punchouts in '14, but what you see is what you get in this category, and that's certainly not a value booster in roto-leagues.

According to the Mock Draft Army run by Howard Bender, Kyle Lohse has an ADP of 297 or the 25th round in a 12 team league. That's in the reserve rounds if you start 23 players as you should (14 hitters, nine pitchers). At that level, what are you losing if Lohse finally shows his age? Not much. Look at some of the other names being taken within 15 spots of Lohse: Carlos Martinez, Henderson Alvarez, Yusmeiro Petit and Jason Hammel. Any of those guys stand out in an appreciable way? Exactly, they don't. Lohse isn't someone you should be reaching on, but given the current cost he's not someone you should be ignoring in the late rounds either.

10 team lg: With his lack of strikeouts I can't recommend drafting Lohse, though spot starting him might not be a bad idea at all.

12 team lg: He's cheap, consistent, productive. You can hope on the Dylan Bundy's and Noah Syndergaard's of the world or you can do the surer thing and bank on a guy like Lohse who figures to give you 30 solid starts in 2015.

15 team lg: He may be more than a spot starter here. You're not likely to be happy to call out his name on draft day, but as this entire piece has hopefully shown it wouldn't be the worst thing in the world if you were backed into that corner.

NL-only: Stability. Innings. Ratios. Seems like an ideal mid-level target does he not?