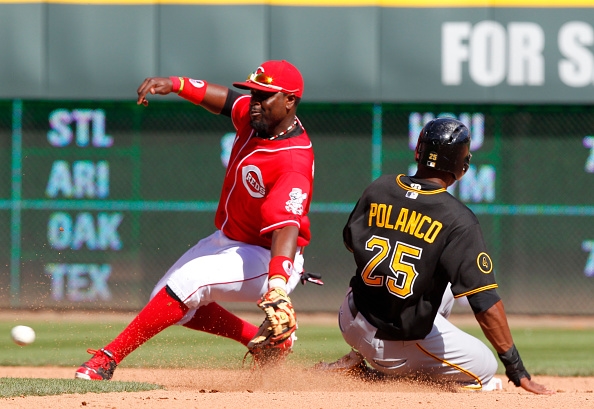 Brandon Phillips is 33 years old (he will be 34 at the end of June), coming off his lowest games played total since 2006 (he missed 39 days with a ligament issue in his thumb that required surgery), and as a result he has fallen out of the consciousness of many when it comes to talking second sackers. Can the successful veteran turn back the clock in 2015 or are the salad days in the rear view mirror?

2002: Traded to the Indians. Ranked as the 20th best prospect in baseball by Baseball America.

2003: Ranked as the 7th best prospect in baseball by Baseball America.

Here are his 5x5 numbers and games played marks per season.

First off, he got old. Guys can still be extremely productive players at 33 years of age, but the fact is that stealing bases is a young man's game. How many players, 33 or older, stole 15 bases in 2014 you ask? It's not a long list at all: Rajai Davis, Jimmy Rollins, Coco Crisp, Alex Rios and Ichiro Suzuki. Only five guys accomplished the feat. Phillips has seven steals the last two seasons and has only attempted to run 13 times (yes, he's gone 7-for-13, a horrid 54 percent success rate). Could he steal 15 bases in 2015? I'm not going to say it's impossible but the odds are looooooong. Moreover, even 10 steals might be asking too much of Phillips.

What about the power? From 2006-13, 8-straight years, Phillips hit at least 17 home runs. He and Dan Uggla were the only two second basemen to be included in that group. Additionally, from 2010-13 Phillips hit exactly 18 homers each season (which is impossible to do). So what happened in 2014? A ligament issue in his thumb required surgery, and that certainly set back Phillips. Hard to know exactly how much, but it was obviously an issue. However, the concerns with his power stroke go back further than 2014.

(3) Phillips has a 34 percent fly ball rate for his career. The last four seasons the mark has been between 32.3 and 34.9 percent. Right on average for him.

I'm willing to posit that part of the decline last year was due to injury. But that's only part of what we've seen the last three seasons as his power stroke has diminished - likely the result of the onset of age. It's possible he gets back to 18 homers in 2015, but know that he's no longer the power lock he used to be in the power department.

As for his batting average, that too has dipped a bit the last three seasons. After batting .300 in 2011 the number has regressed to .281, .261 and .266 the past three seasons. First look at BABIP says nothing is amiss. A career .292 mark has led to similar numbers that past few years as Phillips has posted totals of .298, .281 and .298 the past three years. His line drive rate has actually been a bit above his career mark in each of the last four seasons. His strikeout rate is only half a point above his career K-rate (14.2) the last two years. Phillips also has a GB/FB ratio the last two seasons of 1.34 and 1.39. His career mark is 1.39. Chalk up the declining batting average mark the past two years as nothing more than white noise. After all, Phillips has hit .263 the past two seasons while his career mark is .271.

Brandon Phillips will likely be a productive second base option in 2015. He's not going 20/20, and 15/15 would be quite the feat. Even a muted 15/10 effort seems like a bit of a stretch at this point. His thumb issue washed out his 2014 effort, but his overall game has been in decline for three seasons. With only one 85 RBI season in five years (and just one of 80 the past three seasons), only seven steals the last two years, and across the board decline in his power production, Phillips is best used in mixed leagues as a middle infield option and not a starter at second base.

10 team lg: With little in the way of upside in batting average, homers or steals, there's really not much to recommend Phillips in this format. More of a bench option.

12 team lg: As noted, you could try to roll with Phillips as your starter at second in this format, but I'm not recommending that. We all love to target upside, and there is none with Phillips. Even a full rebound is unlikely leaving him as a relatively limp option at second base.

15 team lg: Build excitement elsewhere and be boring at second base. You can do that with Phillips. Yippee.

NL-only: Are there 10 better second base options in the NL? If you include guys like Gyorko and Prado maybe, but the fact is that Phillips certainly has a strong chance to be a top-10 second baseman in the Senior Circuit, and he isn't likely to break the bank to acquire either. Given that fact, if you end up calling his name out you should feel alright about it.