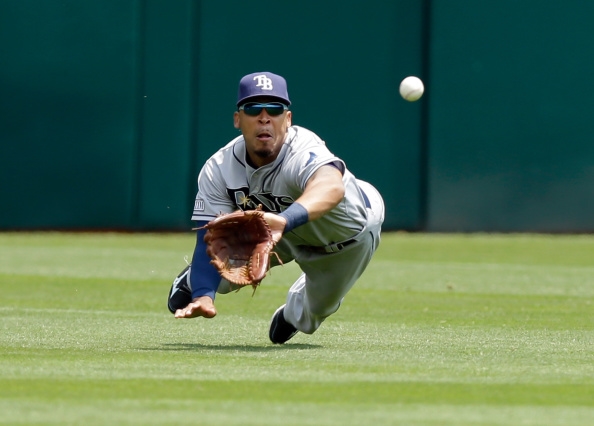 Desmond Jennings is only 28 years old, and studies suggest that a players peak age for skill level & baseball knowledge merging to create greatness is when a batter is 28-32 years old. Can Jennings follow that general trend or will he forever be doomed as a good player who never lived up to the expectations that were placed upon him during his minor league days?

2006: Drafted in the 10th round by the Tampa Bay Devil Rays out of community college.

I never add an "injury" section, but with Desmond I felt it was warranted. Here's a listing of the significant injuries he's dealt with over the years.

As you can tell, Jennings knows his way around the doctor's office.

Sometimes we all get addicted to things. Booze and sex, those are at the top of the list for most cool people. Others find themselves addicted to chocolate, purses and Vodka Red Bull (a demon of mine I've yet to slay). In the world of baseball one of the players I'm addicted to, one I just cannot quite, is Desmond Jennings. Sometimes you can't explain it. Just happens. I'm almost trying to prove to myself in this piece that Jennings should still be looked at as a potential top-40 option in the outfield.

(2) His production per at-bat is pretty darn strong.

Jennings has hit .248 for his career. He's hit between .244 and .259 each of the last four seasons. Not much of a reason to expect growth here, but let's look anyway.

Jennings has a 0.47 BB/K ratio for his career. That's better than the league average (0.39) and solid without being something we can check off as a real positive.

Jennings has, check this, posted a BABIP between .295 and .298 the past three seasons. A four point spread over three seasons is nearly i m p o s s i b l e to do. That's a league average mark by the way.

Jennings has an 18 percent line drive rate for his career, well off the 20 percent big league average. He's also posted a mark in the 17 percent range in three of four seasons.

The truth is that Jennings has just never figured out how to hit a few pitches. The slider vexes him and so does the cutter as this Brooks Baseball table shows.

Fact is a .260 season would be a victory for Jennings. He will hope to reach the big league average in this category.

A tip Desmond - use your speed and bunt a bit more.

Bigger than you likely think, Jennings stands 6'2" and weighs about 205 lbs. There's a 20 homer season in that bat, though I've got to be truthful here and admit he's yet to hit 15 big flies in a season so I'm getting ahead of myself.

Jennings owns a career GB/FB ratio of 1.28. Given his overall game that's a solid mark. However, the fact that his fly ball rate is just above the league average at 35.9 percent means he's going to have to post a strong HR/F mark if he wants to reach that 20 homer level (and stay healthy of course). Alas, Jennings doesn't have a huge HR/F ratio at 9.7 percent for his career, a perfect match for the league average. OK, maybe 15 homers and not 20 should be the upside goal. Again though... if he could play 150 games...

Something to note in this section is the spot in the batting order that Jennings could inhabit. Often hitting leadoff - 71 of 123 games in 2014 - it appears that the Rays new manager (Kevin Cash) has designs on Jennings batting lower in the lineup, perhaps 5th or 6th. If that move happens, Jennings figures to see his RBI total increase. It could also have the effect of lowering his runs scored mark as well, so with some good comes some bad of course (ain't life always like that?).

Jennings has produced an average of 46 RBIs the past three seasons, though that's been out of the top spot for the most part. Let's compare his career numbers in different situations to help broaden the picture.

Maybe he shouldn't be hitting leadoff after all now should he?

Desmond averages 96 runs scored per 162 games, and that's an impressive number. That rate will likely dip if he does indeed hit 5/6, but as noted he would be likely to add more RBIs to help him maintain his fantasy value.

Why does Jennings score so much? It doesn't have a hell of a lot to do with his OBP which isn't much better than the league average for his career at .327. The mark has also been below .320 in two of the past three seasons. As mentioned earlier, his 9.4 percent career walk rate is solid. The real issue with his OBP is that he simply doesn't produce enough hits. If he could have things come together and produce that elusive .270 batting average season, then he could have an impressive runs scored mark.

Former manager Joe Maddon liked to run, so the Rays often did. We don't know what Kevin Cash will do with the running game, but he figures to let Jennings run. Despite all the injuries and averaging just 114 games played the last four seasons Jennings has still stolen an average of 22 bases a season. Moreover, he's one of nine outfielders who have stolen at least 15 bases each of the past four seasons. It's a pretty small group.

Jennings is going to play every day - until his body breaks that is. The starting outfield figures to be Kevin Kiermaier, Jennings and Steven Souza. Veteran David DeJesus could see some work in the outfield, and  Brandon Guyer is also angling for playing time.

Jennings is a talented player who, if healthy, could still impress. Can he stay healthy? History says no. Still, this is a talented man who is only 28 years old and one who has no blockage to a spot in the lineup on a daily basis. You won't have to reach for his services - Howard Bender's Mock Draft Army has Jennings with an ADP of 224 overall - so Jennings should be a player on your radar in virtually every setup, even if you're not a huge fan (I mean really, you would rather have Marlon Byrd and his 216 ADP?). The draft day cost, when measured against his talent, says Jennings is a player to take a risk on, at least in this scribes opinion.

10 team lg: A fourth outfield option though he might easily fall to being your 5th outfielder which would leave you in a position of strength. The worry is his injury filled track record as well as his below average batting average. Make sure you have at least six outfielders you can trust if starting five in this format.

12 team lg: I'll take Desmond as my 4th outfielder and hope. Well, as you saw above there is more than hope involved with Jennings, even if the reliability score you would reward him would probably be in the C+ range (just like my Spanish grade in high school). You don't have to worry about reaching to add him, so just roster him late when others are taking shot on rookies and youngsters with uncertain levels of playing time.

15 team lg: Jennings might just be a 3/4 outfielder in this setup. However, if he puts it all together he's an OF2. Hell, if he just maintains his career pace and plays 150 games he ends up being a huge win in his format.

AL-only: Are you a risk taker? If so, target Jennings. If you've taken risks at other spots on your team, be it with other injury prone players or youngsters, you might be best served to pass on Jennings unless the cost of his services falls substantially.