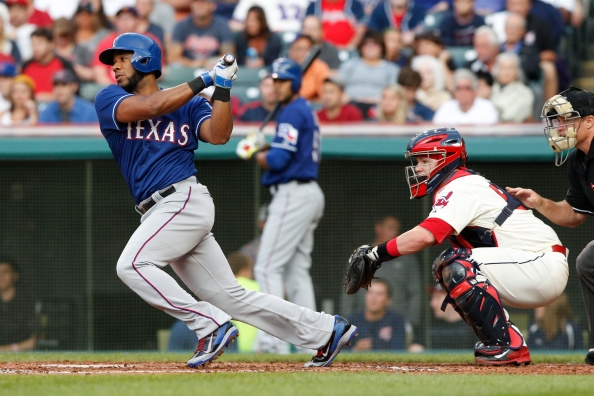 Elvis Andrus had a "down" 2014 season. He saw his homer total, RBI mark, runs scored mark and batting average all regress from 2013. He stunk. Or did he? Perhaps people have been far too quick to bury the 26 year old shortstop of the Rangers. Let's explore.

I'm only going to list the 5x5 numbers for Andrus along with games played since he's an establishe.

The common line of thought with Andrus goes something like this - he stunk in 2014. Compared to 2013 his AVG, OBP, HR, RBI, runs scored and steals marks all went down. Therefore he did stink. Or did he? I'm here to argue he really didn't. Have a fallen an hit my head on the floor after a long night of drinking at the local fishing hole? Let's find out.

FACT: If Andrus had five more hits last year he would have hit .272 - his career average. Over six months and 26 weeks Andrus was five hits off matching his normal mark.

He's not a power hitter, just ain't, so this is really a complete waste of time to talk about with Andrus. Still, for the sake of being thorough.

Isolated Power - which is slugging percentage minus batting average - showed a mark of 0.69 for Andrus in 2014. His career mark is .073.

FACT: Yes he was 50 percent of his career "average" in homers, but a new loss of two big flies is nothing to even waste time thinking about.

(2) Let's compare the Rangers team to itself.

Every number went down including the club scoring nearly 100 fewer runs in 2014 than '13. Perhaps it wasn't just Andrus that let you down, perhaps it was the entire Rangers team who simply wasn't as effective offensively as they had been the previous season?

Andrus scored 72 runs in 2014 after recording at least 85 runs each of the previous four seasons (from 2010-13 Andrus was the only shortstop in baseball to score 85 runs each year).

First off, let's give Andrus credit for being consistent. ow that we've done that...

Andrus averages 89 runs scored per 162 games for his career, so scoring 72 times last season does stink. Was it his fault entirely? The answer is no. Partially yes, but not completely.

A career .335 OBP is what Andrus tosses out there. Last season that mark fell to a career worst .314. Still, the mark was just .328 in 2013 when he scored 91 times. We noted above the struggles the Rangers offense had last year. Let's compare again by looking at the teams effort the past two years with runners in scoring position.

Look, Prince Fielder appeared in 42 games, Mitch Moreland 52, Shin-Soo Choo was hurt all year leading to 123 infective games and Alex Rios (Player Profile) was a production mess in his lone year in Texas. Blaming Andrus isn't enough. You have to blame the poor play of his teammates as well for his drop in runs scored.

FACT: From 2010-14 Andrus is the only shortstop in baseball to scored 72 runs each year.

The issue wasn't that he didn't run, it was that he wasn't very successful. For the duration of his career Andrus has averaged 46 steal attempts a season. In 2014 he attempted to run 42 times. The problem was that he was thrown out 15 times after being caught an average of 10 times the previous three seasons. He has to do a better job converting his attempts. That is on him. Still, if he he stole three more bases last season - that's and extra 0.5 steals a month - he would have stolen 30 bases and I bet that the fact he hit that number would have artificially quelled the concerns of most. Our brains just love round numbers.

FACT: For 6-straight years Andrus has stolen at least 21 bases. He is the only shortstop in baseball in that club. Moreover, only one other man at any position can match that - Rajai Davis

Elvis Andrus has played at least 145 games every season of his career.
How many players have seen the field 145 times the last six years? Sixteen.
How many of those play shortstop? Two: Alexei Ramirez an Andrus.
The last three seasons Andrus has appeared in 471 games, the 10th highest total in baseball.

You don't give a guy $120 million over eight years and bench him the first year that contract kicks in. Andrus will play every day, and if history is an indication bat second given that 586 of his 914 career games have had him hitting out of the two hole.

Much like Starlin Castro (Player Profile), Andrus is a very solid, young player who really doesn't get the respect his performance dictates he should receive. He doesn't have any pop, doesn't have the look of a guy who could hit .300, and certainly isn't going to light up the scoreboard with a big RBI effort in the coming season. But Andrus is consistently productive and he's consistently on the field. He also steals bases, and for the most part, scores a lot of runs. He ain't sexy, but that don't mean he ain't someone you should want in your sphere.

10 team lg: His lack of power is a detriment, but you can find your power elsewhere. A boring, lower level starting option who is solid, consistent and productive. Spend elsewhere and lock down the production with Andrus.

15 team lg: Given the perception that Andrus hasn't lived up to expectations, sucked last season, and is overpaid, there's zero hype with him heading into 2015. Use that to your favor and roster Andrus as a near lock to be a top-10 shortstop in 2015.

AL-only: Health, speed and production. I like it and would happily tab Andrus to be my starter at shortstop without hesitation in this format.