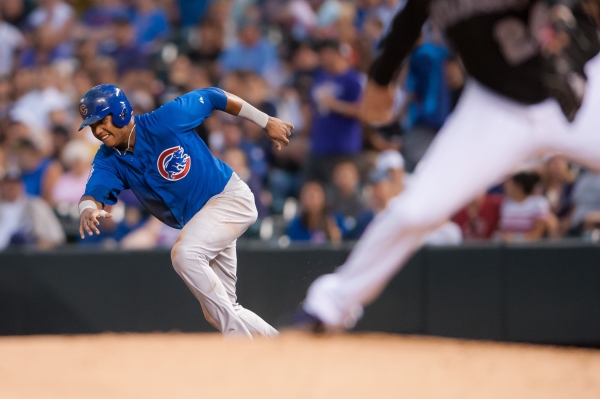 Do you know that Starlin Castro doesn't turn 25 until March 24th? Despite being just 24 years old he has 740 games under his belt. George Springer is already 25 years old. He has 78 games of big league experience. You might want to re-read that statement to make sure you've taken it in. The fact is that Castro is still young, has tons of experience, and is coming off a pretty darn solid season. I believe he's someone who could still show some improvement, and if that happens, he could be one heck of a player in 2015.

2010: Ranked as the 16th best prospect in baseball by Baseball America and 37th by Baseball Prospectus. Appeared in 26 games at Double-A batting .376 with 20 RBIs and 30 runs scored.

2014: Missed time with a high ankle issue helping to limit him to 134 games. Castro stole a mere four bases but saw his batting average return to a .292 mark. He hit 14 homers with 65 RBIs and 58 runs scored.

Think of it... the career best fantasy numbers for Castro include a .307 batting average, 14 homers, 78 RBIs, 91 runs scored and 25 steals. Those would be elite numbers if he posted them all in one season. In fact, not a single big leaguer reached all five of those marks in 2014.

Castro is a .284 career hitter, and in four of his five seasons he's hit at least .283 with the only time he missed being a .245 effort in 2013. The fact is that he's been a stable producer in batting average.

Castro doesn't walk nearly enough having never accrued 40 free passes in a season. At the same time the last four years he's been between 30-36 walks each year. Just like the batting average, extremely consistent.

Castro strikes out at a moderate pace in today's game, even if the rate is a wee bit high for a player that lacks significant pop. For his career his K-rate (K/PA) is 15.6 percent. In three of the last for seasons he's had 96, 100 and 100 strikeouts. Again, consistent is he.

Are you seeing the trend here?

Castro has swung at 33.7 percent of pitches outside the strike zone in his career. The number has been between 31.5 and 33.7 percent in four of five season.

Castro has swung at 65.5 percent of pitches inside the strike zone in his career. That number has been between 64.9 and 65.0 percent in four of five seasons. That's stunning consistency.

As you are becoming aware, there has been a good deal of consistency in the game of Castro in a myriad of measures. Has anything been elite? Not really. Has anything been outstanding? Not really. But when a 24 year old can show that much consistency you should at least be giving the guy some credit. Then there is this. Per 162 games in his career an average fantasy season from Castro has been .284-11-64-74-15. What do I always do? You know what's coming. How many shortstop eligible players recorded all five of those numbers last season? From what I'm seeing the answer is zero.

Try this one on for size.

How many shortstops have hit at least 10 homers the last four seasons? The answer is just three: Hanley Ramirez, Jhonny Peralta and Castro. There is very little consistency at the shortstop position. Other than 2013, Castro has been all about consistency. Again, nothing great but consistent.

So I guess the real concern is can the 2013 season be put out of our mind or is there a chance he repeats an effort like that?

Here's the honest truth. Castro had a bad season in 2013. However, he wasn't that far "off." Many people don’t seem to quite understand that about players. The line between succeeding and failing is so impossibly thin. A couple down weeks can kill you, as can 6-10 bad bounces over the course of 26 weeks. It's really not that much folks. Castro was down in 2013, but nothing overly crazy stands out in the effort. Just the facts.

The one issue that really must be addressed with Castro is speed. or more directly his ability to steal a base. In this area he has undoubtedly faltered. After stealing 10 bases as a rookie he managed to swipe 22 and 25 batters the next two seasons. The last two years he's attempted 15 and eight stolen bases. He's simply not running as he once did. Just ain't. Could he ratchet things back up under Joe Maddon? For the majority of his tenure with the Rays Maddon showed himself to be very aggressive on the base paths leading to a ton of stolen base attempts. That information about Maddon is nothing but good news for Castro, but it doesn't mean he will return to the 20-steal plateau in 2015. It does seem probable that he will be running more than he has the past two seasons though.

Castro will be in the lineup everyday. The only thing that Castro has to be worried about is being traded. For now, Javier Baez will play second with Addison Russell continuing to hone his craft in the minors. When  Russell is ready the Cubs will have to trade somebody.

Castro isn't yet 25. He's durable. He's consistent. Players this young, with that much experience, are great targets on draft day because of the 'I know what he brings to the table' production. It's also heartening to have Joe Maddon and his aggressive ways on the base paths in tow. Castro could walk more and if he did he could have an impressive 2015 campaign, but even if he stays at his current rate he's got a shot to be one of the top-5 shortstops in fantasy baseball this season with a worst case scenario having him as a top-10 option.

10 team lg: Castro is a very boring option in this format, but as noted, a perfectly serviceable one. While others will strike on bigger name players with injury concerns - Troy Tulowitzki and Hanley Ramirez - you can wait to roster Castro while building up the rest of your squad with high level producers.

12 team lg: A prime target of mine. Same as in the 10-team format, Castro won't have to be an early round grab which will allow a safer type of construction of one's fantasy squad. He's also no fly by night and let's hope kinda guy.

15 team lg: Boom goes the dynamite. Same as the other two above setups. Castro should be looked at as an upper half shortstop option in a league this deep.

NL-only: Playing time is often key in a setup such as this, and Castro has that in spades. If he just does what he's done the past couple of seasons he's a solid play. If he runs more he becomes an extremely impressive option. The only downside is that it's possible he could be dealt, and if your league doesn't allow you to hold on to a player if he moves to the American League, maybe you would be best advised to show a bit of restraint with Castro.