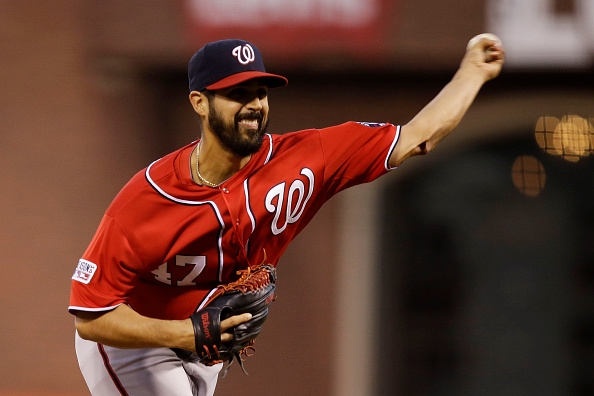 We all want to talk about Max Scherzer and Stephen Strasburg, I get it. But that's not how you win fantasy leagues. By that I mean - we all know who the elite players are, so it's just a matter of adding them to your squad. Everyone knows the elite prospects too, and folks scurry to add them as well. But what about the players in the middle? You know, the backbone of your team. The Matt Garza's (Player Profile) and Anibal Sanchez's (Player Profile) of the world. Those might be the most important guys to discuss, but because they aren't sexy no one really touches on them when they ask me questions. We don't buy into that line of thought at Fantasy Alarm, so here's a Player Profile on Gio Gonzalez.

Drafted in the 1st round by the Chicago White Sox in 2004.

GET YOUR COPY OF THE 2015 FANTASY ALARM BASEBALL DRAFT GUIDE... FOR FREE. IT INCLUDES DAILY UPDATED PLAYER RANKINGS FOR AL, NL AND MIXED LEAGUES.

Gio Gonzalez is 29 years old, a power lefty, and pitches for the Nationals. He's also shown a pretty solid track record of health, notwithstanding his shoulder issues last season, as he'd thrown at least 195 innings in 4-straight seasons prior to last years 158.2 inning effort. Let's break down the skills of this oft wild but dominating lefty.

While everything always plays off the fastball, for Gonzalez the key pitch is the curveball. Just take a look at this chart from Brooks Baseball which illustrates just how dominating the pitch can be.

The results on the yacker are sick. Everyone hits that pitch as if they were a pitcher flailing away at the dish. It's a big breaker, with 12-to-6 action, and when he's on with it batters are in trouble. However, the effectiveness of his changeup is also improving and that's also helped him to keep batters off balance even more effectively. Check out this chart from Brooks Baseball and note how his whiff rate on the changeup has improved greatly over the years. It's a real weapon now.

Gio can attack hitters in more than one way and that, combined with improving control, is pretty intriguing.

With all the good, must come some bad, and in the case of Gio it's the walk that vexes him. For his career he's walked 3.90 batters per nine, a terrible mark. The league average since 2008 is 3.11 by the way. But, there might be some light at the end of this long and meandering tunnel. It's been a nearly linear regression with his walk rate from season to season. Check it.

That's pretty impressive, even if the best number is still nothing other than league average. Still, the numbers has almost universally regressed from season to season, and his 3.38 mark the last three years is  palatable for a guy who walked at least four batters per nine in each of his first four seasons.

The last five seasons Gio has never posted an ERA above the 3.57 mark he had last season, and his average over the five years is 3.22. Among pitchers that have thrown at least 800 innings in those five seasons that mark is 11th in baseball. There's also been plenty to support those ERA marks. The last four seasons his xFIP has been 3.43 and his SIERA 3.57. You don't need to really understand how those two measures work - they take into account the events that a pitcher has directly in his control while removing some of the white noise of ERA - to notice that they are pretty much right in line with the raw ERA's he's been posting.

Even with all the walks, Gio has still done a solid job in the WHIP category. Yes, his career mark of 1.30 is league average. However, note that the reduction in walks of late has helped him to post a mark of 1.25 or better each of the last three seasons. It should also be mentioned that amongst pitchers who have thrown 500 innings the past three years that his 1.19 WHIP is 22nd in baseball just ahead of guys like Yu Darvish (1.20) and James Shields (1.20).

Gio owns a 1.36 GB/FB ratio for his career. Over the last six years he's also allowed a 36.6 percent fly ball rate or less each season. The leave average last year was 34 percent. What that means is that Gio is basically a league average type of fly ball arm which helps keep his homer total moderate to strong most seasons. That is aided by a 9.0 HR/F ratio that is dead on the league average. The result is a 0.75 HR/F ratio for his career and a run of 5-straight seasons with a mark under 0.80. That's pretty impressive. The league average last year was 0.90.

What about the often variable BABIP? Not so variable in this case. The last five seasons the mark has never hit .295 and it has been between .267 and .294 each season. Gotta like that consistency.

Really aren't any differences to talk about. No one really lights him up.

Depending on how they line their rotation up Gio could be the 4/5 starter for the Nationals. The top-3 will be Stephen Strasburg, Max Scherzer and Jordan Zimmerman (wow), follow by Doug Fister and Gonzalez. There's isn't a better starting five in baseball and this unit has a chance to go down as the best five-some in recent history if all five pitch up to their talent.

There are few in the game that are better at producing the punchout than Gio. He continues to evolve as a pitcher, sharpening his changeup and cutting down on the walks, and he's not yet 30 years old. Unless last seasons health issue is a sign of future woes, there's really no appreciable reason why anyone should be avoiding taking Gonzalez in 2015.

10 team lg: A borderline third starter who you will likely be able to draft even later than that. Use the fact that he didn't hit 160 innings last season to your advantage.

12 team lg: A target here. After the big names on the hill are off the board people will start to fall into a pitching coma as they look for offense. That's when you want to pounce on Gio. If he's your third arm, after building a strong offensive base, I like the sound of that.

15 team lg: Strikeouts are at a premium the deeper the league is. When that pitcher also has decent ratios, and he's pitching for an upper division club, what's the worry with rostering that arm? Shouldn't be any with Gonzalez. Bid away.

NL-only: For the strikeouts alone he is intriguing. When you pile on the 1.20 WHIP the last three seasons and the improving walk rate, you shouldn't feel terribly uncomfortable if he ends up being your second starting pitcher, but as a third... would love that.