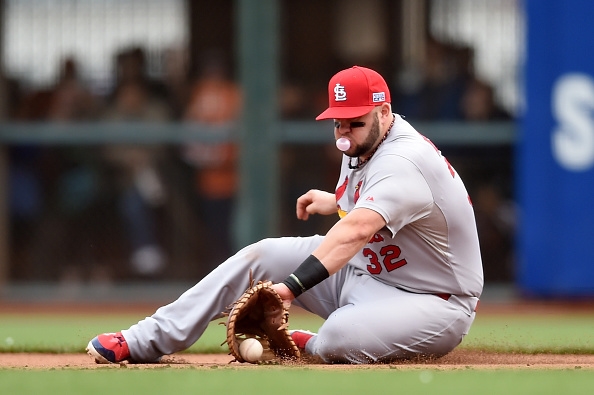 Matt Adams has a following in the fantasy baseball community. Not sure I really got it either. The past few years a guy like Adam LaRoche has often found himself being drafted after Adams. Admittedly a nice power bat, Adams is also extremely limited at the dish, and when you review his production to this point of his big league career, well, the term impressive never comes to my mind. Does it to yours? Let's explore.

GET YOUR COPY OF THE 2015 FANTASY ALARM BASEBALL DRAFT GUIDE AND DOMINATE. CLICK ON THE LINK TO FIND OUT HOW TO PICK UP YOUR OWN COPY... FOR FREE.

Let me admit off the top, we're only talking 277 games and 909 at-bats here. There's still potential growth with Adams who will be 27 in August. Now, let's move forward.

And that's the thing with so many players in fantasy baseball, including Adams. The one word of doom to associate with his name is - POTENTIAL. Could Adams hit 30 homers? Anyone who has watched him swing a bat would have to answer that question in the affirmative. However, where is the PRODUCTION? Through three seasons he really hasn't shown itself except for spurts of success.

While the power hasn't lived up to expectations his batting average actually has surpassed many. A .283 average for his young career is pretty impressive, as is the fact that he's hit .284 and .288 the past two seasons. Here comes the reality check. He may not be a .283 batter.

Adams posted a 24.3 percent line drive rate last season. That was a borderline elite mark that was the 20th best total in baseball. Is that who Adams is? It wasn't who he was his first 133 big league games where he couldn't even muster a mark of 19 percent. If I was betting your money I might buy 2014. If I was better my money I'd be more inclined go with the 19 percent guy (his minor league mark was 20.7 percent).

Adams did produce a BABIP of .325 in the minors. His mark to this point in the big league is .336. That's a big number though Adams has been extremely consistent the past two seasons with marks of .337 and .338. Sample size though has to be an issue. Also of concern is the dramatic line drive increase he showed in year two, yet there wasn't much growth in his average of BABIP. While players can establish their own baselines, we know this, a consistent mark in the .330's is still awfully high.

Adams never walks and that's always a concern for me. Adams has walked 54 times in 973 plate appearances. Awful. Even without a huge strikeout mark that still leaves him with a BB/K ratio of 0.25 for his young career, roughly 2/3 of the average big league hitter. As I say and write all the time, an approach like this one makes producing a batting average of consistently high standing very difficult.

All of the above though leads to one inescapable fact. Matt Adams cannot hit left-handed pitching. Here are the numbers compared to his success against righties.

His OBP against righties is higher than his SLG against lefties. He cannot, not even come close, to hitting an elite lefty, and the data suggests he can't hit any lefty with authority. Any big fella can luck into a pitch and stroke a big fly, but look at that slash line against lefties again. All three marks are abysmal.

If you were the Cardinals' manager why on earth would you play Adams against lefties? We saw above how bad he is in that scenario. That would seem to indicate that a best case scenario should result in him playing just against righties. After all, his slash line against righties is All-Star caliber stuff (last season Miguel Cabrera's slash line was .301/.371/.524). Adams can't hit lefties. Period. Enter Mark Reynolds, a very similar power bat actually, who was signed by the Cardinals this offseason. Reynolds has holes all over the place in his game, but he's hit at least 20 homers each of the past seven seasons (the only time he missed in his career was as a rookie when he hit 17 in just 366 at-bats). Check out the career slash line of Adams and Reynolds versus lefties.

You don't have to be a mastermind or someone with a PhD in mathematics to see that the superior option, in all respects, when a lefty is on the bump, is Reynolds.

Matt Adams is a solid bat and he will have a long career. However, on an upper level team he will likely always be limited to platoon work, albeit on the right side of the platoon. Still, with his at-bats likely capped, his mixed league value is dimmed, especially in leagues that don't allow you to adjust your lineup on a daily basis so that you can remove him when the Cardinals are set to face a lefty.

10 team lg: Consider the Oracle uninterested. I'll let someone else waste a pick on Adams since a best case scenario likely would be Adams as a solid corner infield play in the right matchups.

12 team lg: Mild interest at best. With the signing of Reynolds I just can't get excited enough about the playing time outlook of Adams to have much interest here as anything other than a bench add.

15 team lg: Might have me interested, at least a little bit. Still, would you really rather have him than guys like Brandon Belt, Brandon Moss or Justin Morneau? ADP data suggests most would. Would you?

NL-only: Make it happen kid. Losing a few at-bats in this format is far from detrimental. Still I'm not paying an elite price for him, not with his batting average potentially dropping and his power yet to consistently show itself at the big league level.