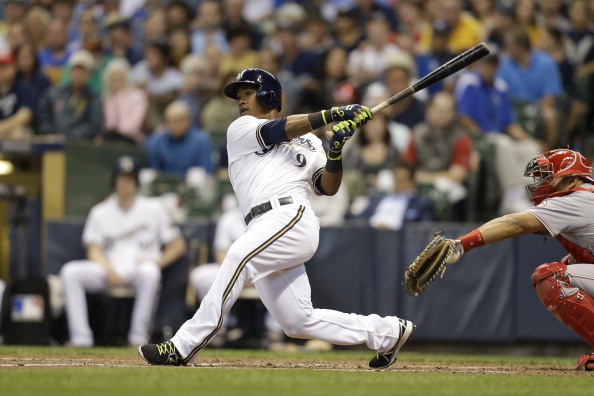 Jean Segura was always looked at as a potential star. The fleet-of-foot shortstop has a very fantasy friendly game that was on full display in 2013. Or was it? The numbers in 2013 suggested he was a burgeoning star, but if we remove a month of action from that first full season we end up having 300 games of big league work that show his bat simply isn't ready for prime time. Does that mean he's doomed to fail in 2015 or can he recapture his previous glory?

Jean Segura is a skilled but flawed player. We don't need to dig very deep at all in order to understand that. A quick overview before we mine the data more thoroughly.

Obviously he's a below performer according to these three rather important measures.

In three seasons he's hit 17 homers and drive in 94 runs. Last season Ian Desmond hit 24 homers with 91 RBIs. Segura is well below average as a power bat and run producer.

This cursory look at Segura tells us is that he's a poor offensive performer, but at least he has speed. Segura has swiped 64 bases the last two years and that's the 13th best number in baseball. Alas, he fell from 44 steals in 2013 to 20 in 2014, a massive drop.

So why is it that people seem to think there's a good chance that Segura "rebounds" in 2015? Let's explore.

First off, he turns 25 in March. People seem to always default to the position that a youngish player will rebound from a slump or a youngish player will improve from one season to the next. That's not always the case. It isn't. It's also possible that a guy will have his best offensive season in one of his first three years in the big leagues, never to reach the pinnacle of success again. It happens. The history of baseball is littered with such tales, though no one seems to want to admit it.

Second with Segura, playing off the theme just mentioned, people note that Segura was a very impressive performer in his first full season (2013). Totally true. When you hit .294-12-49-74 with 44 steals, as a shortstop, you're smoking good. Let's dig into that season a bit. It may not have been as impressive as you think.

Segura hit .241 after the All-Star break.
He hit one homer over his last 54 games while driving in 13 runs.
He stunk.

Segura has no power. Nothing to see there. He's posted a 60 percent ground ball rate for his career and when he does lift the ball his 7.2 percent HR/F ratio is below average. The 12 homers he hit in 2013 would be the top of what he can be expected to provide.

Segura has averaged 40 RBIs the past two years. Dreadful.

Segura has speed so it's possible he could improve on his batting average but note the following. (1) He's hit .245 for his career - minus April/May of 2013. His 0.37 BB/K ratio is barely average. His .302 BABIP is barely above average. His 17.8 percent line drive rate is below average. Just nothing to see here.

Runs scored? He had better hit 1/2 in the Brewers lineup. If he's down at 7/8 it will crush his runs scored outlook. Not only is his career OBP .017 points below the league average since he became a pro, but he's posted a mark of .290 since June 1, 2013. That's flat out pathetic. Not saying that to pile on either. It's a simply awful number. Hell, Billy Hamilton - who is a terrible offensive performer - had a .292 mark last season.

Finally, Segura's complete inability to get on base simply kills his opportunities to run. Don't forget that he fell from 44 thefts in 2013 to 20 steals last season. A major reason for that was that his OBP fell .040 points. He simply wasn't on base enough to unleash his speed potential. He's 76 percent success rate on 94 career attempts is solid, and a run to 30 steals can't be ignored. But he must get on base more successfully or it will be very difficult for him to truly be the weapon that his speed suggest he could be.

The Brewers added Luis Sardinas in the Yovani Gallardo deal with the Rangers. Prior to the move the 21 year old was named the 7th best prospect in the Rangers' organization by Baseball America. A solid defender, Sardinas' bat is moderate at best. He could push Segura for playing time in the second half if Jean doesn't get it going at the dish after he hit .261 in 115 at-bats last year in Texas. Most likely though it will be all Segura, all the time, with Sardinas filling a support role. As for his batting order spot, Segura has appeared in 116 games out of the eight hole, but 167 times he's hit leadoff or second. Watch where he ends up in the lineup as it will greatly impact his fantasy outlook in 2015.

Segura has skill. He's also extremely inconsistent and for the better part of his big league career he's struggled to even resemble a league average performer with a bat in his hands. The power of his 2013 effort is a significant draw at a position where elite production is scarce. Hopefully though the previous 1,400 words have let you in on a little secret that some people simply won't face. Segura has been a bust way more than a hit for the majority of his career. He's shown no growth the past season an a half. In truth, he's actually regressed as an offensive performer. If he's your starter at shortstop you should expect to be treading water. There's "upside" here, but there's scant evidence that he will realize that talent in 2015.

10 team lg: Risky as a starting shortstop in this format. The speed is nice, but if his batting average continues to languish you're really running out a deficient offensive performer.

12 team lg: More palatable as a starting shortstop option in a league this season, but one on the lower end of targets. Don't know how excited anyone can get about Jed Lowrie and Jhonny Peralta types giving Segura a boost. Just realize that you're really only drafted one category and will need to bolster your offense elsewhere.

15 team lg: Now we're talking. If you don't want to go chalk with Asdrubal Cabrera or Ben Zobrist types then Segura becomes a very interesting option to turn to given his talents.

NL-only: A strong play in this setup. His speed could be elite in this deep format, and given that his cost will likely be suppressed he's a fine target to, well, target.