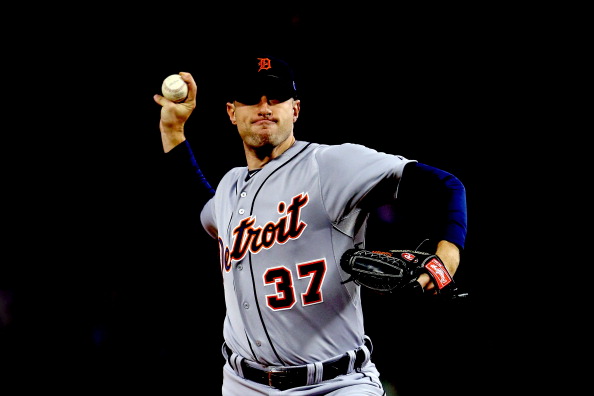 The Nationals might be forced to deal Doug Fister, Stephen Strasburg or Jordan Zimmerman after

their most recent signing.

Max Scherzer signed a 7-year deal for $210 million to pitch for the Nats. The  30 year old ace gave the Nationals a bit of a break with the way that he allowed the club to structure his deal. His contract will actually be paid out over the next 14 years (he also gets a $50 million signing bonus, though that will be spread over multiple years to allow him to avoid income tax penalties). That means he will be paid $15 million a year for the next 14 years. I'm actually surprised more guys don't sign deals like this or something like setting up an annuity. Helps the team have more upfront money, and the guy still gets paid.

Seem like a bit of overkill don't it? The Nats not only have the best starting pitching five-some in baseball, their current 6th starter would be Tanner Roark who won 15 games with a 2.85 ERA and 1.09 WHIP (the other starters are Jordan Zimmermann and Gio Gonzalez).

Scherzer is locked in as an SP1. Some talk will be over the top with the move to the NL - I had a guy ask me if Max was now on par with Kershaw - but there is no doubting the move to the NL should help. More than the ERA or WHIP which should at worst stay stable with obviously little reason to doubt a slight improvement, his strikeout total could go up facing those pitchers instead of the DH. He's been at 231, 240 and 252 the last three seasons. Hitting 275 seems possible, even if you shouldn't be expecting more than 250.

The 29 year old Fowler has always been one of my favorites. A talented player who does an awful lot of things well - even if that never equates to fantasy greatness - Fowler was 15th in baseball last year with a .375 OBP and the mark has been at least .363 each of the past four seasons. There are only three men in baseball who have hit that mark each of the last four season (at least 475 plate appearances). They are: Fowler, Matt Holliday, Andrew McCutchen and Miguel Cabrera. Fowler has career bests of 13 homers and 27 steals, though continual injury issues can't make a run to those levels expected. He's also hit just .271 for his career so he's likely not a great threat to push .300 there. He's a strong 4/5 outfielder in mixed leagues though. If he could just stay healthy...

Arismendy Alcantara will likely be slotted as a reserve now knocking him down from mixed league relevance in most setups unless the Cubs start him at third base and send Mr. Bryant down to the minors. Would they really do that or will they allow uber-prospect Kris Bryant to be their starter at third base? Maybe, maybe not.

The Astros infield seems pretty set: 1B Jon Singleton, 2B Jose Altuve, 3B Matt Dominguez, SS Jed Lowrie. It's not like Dominguez is a world beater though, so perhaps Valbuena will be able to carve out more than a super-sub role, though time will tell. Quietly effective, Valbuena hit 16 homers with a .341 OBP last season. He's AL-only material.

Straily is 26 years old and has had moderate big league success. Through 243.2 innings he has a 7.50 K/9 and 3.58 BB/9 rate with a 0.75 GB/FB ratio. With a fly ball rate of 47 percent, and worse than a league average mark in the walk category, he's nothing but a late round AL-only type if he can beat out Brett Oberholtzer, Brad Peacock and Samuel Deduno for the 5th spot in the Astros rotation.

Bigfoot Strolls Through A Russian Forest?

Gallardo will head to Texas with one year remaining on his contract (it appears that the Brewers are paying $4 of the $13 million that Gallardo is do in '14). The soon to be 29 year old gobbles up innings hitting at least 180 each of the past six years. Coming off the best full season ERA of his career (3.51), Gallardo's name carries more weight than his fantasy game. Only once in the last six years has his WHIP been below the league average, and for his career the number is 1.30. He's also gone from being a strikeout an inning arm from 2009-12 down to a guy who has failed to hit 7.20 punchouts per nine the last two seasons. He has jacked up his ground ball rate the past two years, it did hit 50 percent for the first time last year, and that's certainly a positive. The lack of K's do diminish his value, and though he's hit 180-innings the past six years he's gone over 195 only twice. Don't overvalue him because of the move - his new home park and AL batters will do him no favors.

For more on the prospects the Rangers received read this article.

It looks like Johan Santana will get a contract from a big league club soon. Coming back from all those shoulder woes, and a blown out Achilles tendon, you have to give the soon to be 36 year plenty of props for persistency. He was reportedly hitting 90 mph on the radar gun during his work in Venezuela which would be surprising since the last time he averaged 90 mph on his fastball was back in 2009 (has to be a fast gun). Wish him luck, and I don't doubt if healthy that he couldn't get batters out, but I toss him in the Ryan Vogelsong type category right now, and that shouldn't excite anyone.

My video thoughts on the moves that lead to the Padres outfield now being stalked by Wil Myers, Matt Kemp and Justin Upton.