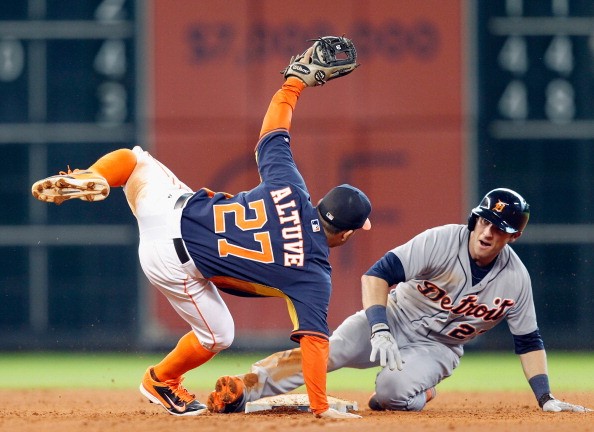 Jose Altuve, The Little Engine That Could

Standing 5'6", Jose Altuve is the shortest batting title champion since Wee Willie Keeler hit .385 in 1898 (Altuve is a giant compared to Keeler who was 5'4", 140 lbs). Can the smallest of the small in Altuve back up his historic season with another monumental effort in 2015?

A look back before we look forward with Altuve:

BATTING AVERAGE: WHAT LIES AHEAD?

Altuve has no power. The seven homers he hit were a career best. It would take a minor miracle for him to reach 10 homers, something akin to a god reaching down from Mount Olympus and bestowing the power of Hercules on Altuve. I don't think Altuve would be able to fill out the tunic. He also doesn't drive runners in, being that he hits atop the Astros' order. In three seasons, he's never recorded 60 RBIs while averaging 56 runs batted in the last two years. A run producer he ain't.

Altuve scored 85 runs last year, a career best, to give him a three-year average of 76 runs a season. Anyone would take 85 runs scored from just about any player and certainly their second baseman. It should be noted, though, that Howie Kendrick scored 85 runs as well and the 85 runs both scored were behind other second-base eligible players like Brian Dozier (112), Anthony Rendon (111), Ian Kinsler (100) and Dee Gordon (92). Hard to consider a guy an elite producer in runs when four other second baseman scored more times. Let's just say Altuve is a strong run scored performer and leave it at that.

It's the other two categories—batting average and steals—that truly set Altuve apart in 2014.

Those are some big numbers. “So why the sad face, Ray?”

(3) Altuve never walks. In his three full seasons, he's walked 40, 32 and 36 times. The fact is that when you swing at everything and don't take a free pass more than once every four games, it is virtually impossible to consistently produce a hit every third at-bat. Here are the men who have hit .325 the past five years and their walk totals:

Being fleet of foot to beat out grounders certainly is a huge key in producing a high batting average, but recent history is pretty clear on this count. Of the 20 seasons with a .325 batting average the last five years, Altuve's is the only one in the 30s in terms of walks. The other 19 seasons, batters averaged 64 walks.

(4) Despite the .341 average, nothing really changed in his batted ball distribution.

(5) Let's take a look at his plate discipline by looking at his swing results.

Moreover his .377 OBP is a bit deceiving. Why? Here are the differences between his batting average and OBP from season to season.

Sorry, but there really wasn't any appreciable growth with Altuve last year to support the significant batting average increase, which leads me to the inevitable conclusion that a repeat ain't coming in the batting average category and that's significant for many reasons.

THE STOLEN BASE: WHAT LIES AHEAD?

Being that Altuve doesn't know how to take a walk, the loss of hits could damage his OBP significantly. Less hits will lead to fewer times on base and a lowering of his runs scored outlook (duh). As importantly for the fantasy game, fewer times on base will hurt his ability to, wait for it, steal bases.

Altuve is speedy. Maybe he honed that talent when he was hiding from the kids who were trying to stuff him in a locker when he was a kiddie? Still, what he did last year certainly wasn't expected.

Baseball HQ developed a measure called Stolen Base Opportunity Percentage, which is an approximation of how often a runner attempts to steal a base: (SB+CS) / (BB+singles). Let's see how the number changed in 2014:

That's not a crazy increase by any means, but it is, again, an increase to a pretty high level.

If the average falls to .302, his career mark, he will still be a strong performer, but paying an elite price for a .302 hitter who has averaged six homers, 49 RBIs, 76 runs and 41 steals the last three years might not be the best use of your funds in 2015, because the odds certainly support the position that Altuve won't be able to reach all five of those numbers again in 2015.