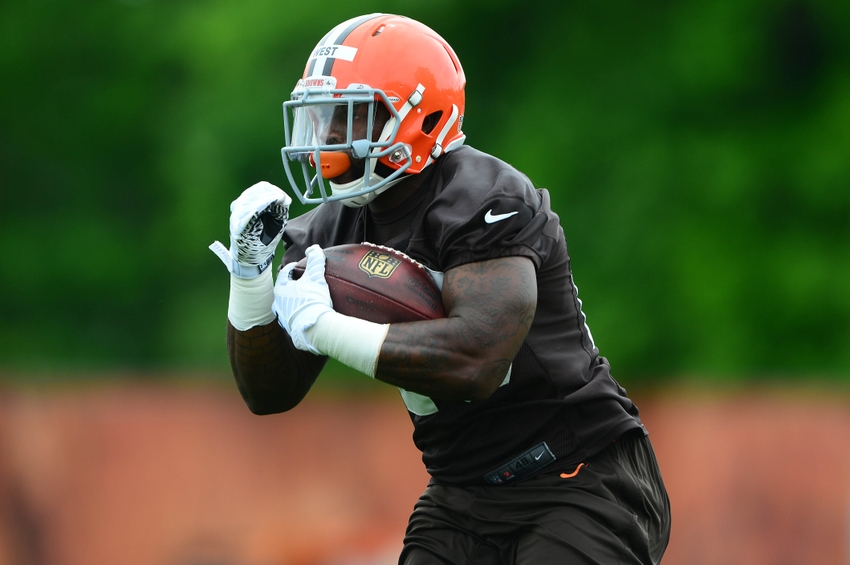 Another week of intrigue in the NFL. We've got newly anointed starters under. The running back position, as it always does,

is in a bit of turmoil. A few rather innocuous wideouts stepped forward in Week 10. At tight end... well there may not be a weekly starter on the waiver-wire, but that doesn't mean there aren't a couple of guys from that position that we need to discuss.

Make sure you sign up for an account with Draft Kings. When you do, you'll get a free entry into a daily football game. Put behind you the injury woes that have ruined your season and put together a new team every week at Draft Kings.

Michael Vick, Jets,
Can I quote myself? Sure I can, I'm the Oracle. This is what I wrote last week. " He can still break a defense down with his legs. Amount to Spend: 20-25 percent." Maybe you listened, maybe not. Might cost more now to add Vick now after he completed 21-of-28 passes for a score. He also ran four times for 18 yards. Best part? Well two best parts. (1) He didn't turn the ball over. (2) Look what he did for the wideouts; Eric Decker caught nine passes for 63 yards an a score while Percy Harvin caught 11 balls for 129 yards on 13 targets. Geno Smith has never done that for his wideouts. Reports suggest that the team might turn back to Smith, but after the effort of Vick in Week 9 seems odd if they were to make that choice unless Vick is unable to go because of an issue with his foot.
Amount to Spend: 15-20 percent

Mark Sanchez, Eagles
HC Chip Kelly said, "I don't think we missed a beat offensively" with Sanchez under center. Debatable of course, but give Sanchez some props. He came off the bench and completed 15-of-22 passes for 202 yards and two scores (of course, he also had a couple of picks). With Nick Foles suffering a broken clavicle the remainder of the regular season is in doubt for the tall one (last year Aaron Rodgers missed seven weeks with his clavicle issue). Sanchez will be the hot pick up this week as people believe in the Kelly led offense. However, be careful not to overspend. Sanchez has thrown for an average of 195 yards a game with one more interception than touchdown (71 to 70) over the course of 63 career outings. Oh yeah, he's also completed 55 percent of his passes and has appeared in one game the past two seasons. A QB2 option for sure, but don’t get carried away into beliving all the hype you will read about him being a QB1. .
Amount to Spend: 15-20 percent

Matt Asiata, Vikings
The lumbering back for the Vikings Asiata is. Sunday Asiata scored not once, not twice, but three times. Three being the operative term. The three score outing was his second of the year, and third of his career. Seriously. Asiata is what he is, and that's a boring, TD dependent back. Over 84 carries this season he's averaged 3.3 yards a tote. He's also caught just 22 passes in nine games. The scores are great, but when he doesn’t get into the end zone there are problems (his previous three efforts before Week 9 resulted in 12 carries, 20 yards and no scores). Jerick McKinnon is still the back to own with the Vikings, and the one who will receive 15 touches a week. Asiata is just a shot in the dark, goaline option.
Amount to Spend: 10-15 percent

Alfred Blue, Texans
Pump the breaks. The Texans have a bye in Week 10. That's point one. Point two is that we don't know how much time that Arian Foster will miss though early reports suggest that his groin issue could be significant. Over 61 carries this season Blue has averaged 3.6 YPC and caught five of six targets. On September 21st Blue started in place of Foster an ran for 78 yards on 13 carries. Standing 6'2" and weighing in at 225 lbs, Blue is a beast of a man who becomes a weekly RB2 if Foster is down.
Amount to Spend: 15-20 percent

Chris Johnson, Jets
Left for dead Johnson, doing his best zombie impersonation for Halloween, seems to be back from the dead. Well, maybe that's getting a little bit carried away. Johnson did have his second 60-yard outing in three trips to the field in Week 9, and he caught two passes for a third straight game. That's the positive. The negative is that he's still run for less than 10-yards in two of his last four efforts and it's been 5-straight games without a score for the Jets back. He shouldn't be on waivers, but having Johnson in your starting lineup, as long as Chris Ivory is healthy, is a huge risk.
Amount to Spend: 10-15 percent

Chris Polk, Eagles
Everyone seems enamored with Darren Sproles and I'm not going to suggest that he wouldn't see an increase in his role if LeSean McCoy were to go down, but the sneaky play, and perhaps the more productive one, would be Polk. If McCoy is out, Sproles plays third downs and might see a couple extra carries, but the first and second down back would be Polk, a shifty yet powerful runner who rushed for 50 yards an a score in eight touches Sunday. Polk is not someone you can consider starting if all three backs are healthy, but if McCoy were to be out...
Amount to Spend: 10-15 percent

Terrance West, Browns
Ben Tate and West carried the ball 25 times for 51 yards against the Bucs with Tate earning three yards on 10 carries meaning that West carried the ball 15 times for 48 yards (he also caught a two yard score). Isaiah Crowell didn't play a snap. Is there a more dysfunctional backfield in football? One week it's Tate. The next it's Crowell, and now we are back to West. The best runner might be Crowell, but with ball security woes clearly weighing on the coaching staff we're in full RBBC mode - with West surging to the top of the trio.
Amount to Spend: 15-20 percent

Damien Williams / Daniel Thomas, Dolphins
We're still waiting on the results from Lamar Miller's shoulder tests, and that will determine the value of Williams and Thomas. If he's healthy, Miller's the only back worth paying attention to in the Dolphins' backfield. If he were to miss time, look for a RBBC between Williams and Tomas. They would likely split work, perhaps right down the middle. We know what Thomas is - and it's just blah. Williams, at one point had some juice, but injuries have sapped from of his oomph. Honestly, Williams would likely be the goaline guy - I think - but just not interested in either of these backs if Miller misses time.
Amount to Spend on Williams: 7-10 percent
Amount to Spend on Thomas: 5-7 percent

Taylor Gabriel, Brown
Gabriel caught five balls for 87 yards an a score in Week 9. He's averaging 19 yards a catch, a massive number. However, the facts are the fact. He's had four of eight games this season with less than 40 yards. Only twice has he caught more than three passes. He's only scored one time this season. Oh, and he's 5'8" and 170 lbs. Great game but not happening with anywhere near enough frequency for him to be on your roster.
Amount to Spend: 1-5 percent

Allen Hurns, Jaguars
This guy goes off, and then disappears. A rather moderate talent, Hurns made a couple of really nice adjustments on two poorly thrown balls by Blake Bortles on both the scoring passes he hauled in for the Jags in Week 9 (all told Hurns caught seven passes for 112 yards and the two scores). Still, he's the #3 wideout on his own team and hadn't scored in five games before Week 9. Might also want to tell yourself the following. Hurns went for 112 yards in Week 9 but he had 100 yards in his previous four games.
Amount to Spend: 10-15 percent

Jarvis Landry, Dolphins
Landry is carving out a certain role in the Dolphins offense. It's a low upside play to start him however. He caught five balls for 46 yards and a score in Week 9. He also caught six passes for 75 yards and a score back in October 12th. Unfortunately the two games between those book ends resulted in seven receptions for 69 yards. A low end PPR threat is all he is.
Amount to Spend: 7-10 percent

Chase Ford, Vikings
Chase Ford caught five passes for 66 yards with a touchdown Sunday. Over the last two games that pushes him up to 11 receptions and 129 yards, along with that score. How much should you bid on him? Pennies on the dollar. Why? Kyle Rudolph (groin) has been cleared to return to practice and he seems rather likely to suit up for the Vikings next game in Week 11. With a Bye in Week 10, and the immanent return of Rudolph, there no reason to get excited about Ford.
Amount to Spend: 3-5 percent

Mychal Rivera, Raiders
The measureables suggest mediocrity. He's not big or fast. He's just a guy. However, he's forming a bond with rookie Derek Carr and that's worth noting. Not only did Rivera score twice in Week 9 but he's also caught 15 of 20 targets the past two weeks. Those are huge numbers and if the volume keeps up he's a borderline TE1 option each week. Should point out that on his eight grabs Sunday he went for 38 yards and for his career he averaged 26.2 yards a game. Don't get too excited.
Amount to Spend: 12-15 percent

Zach Ertz, Eagles
Ertz is big, fast, has good hands, and could be a dynamite red zone threat. Alas, the Eagles simply don't choose to deploy him in a manner befitting his skill set. Ertz only saw the field for 24 snaps in Week 9, a season low, and he's been averaging just 40 percent in the ole snap count category the past month. The main reason is that Brent Celek has been needed as a blocker to help out the injured o-line. If that unit can get healthy then we could see Ertz utilized more heavily but for now he's nothing other than a desperation start with only one score in seven games and nary one effort of 50 yards in his last six outings.
Amount to Spend: 7-10 percent