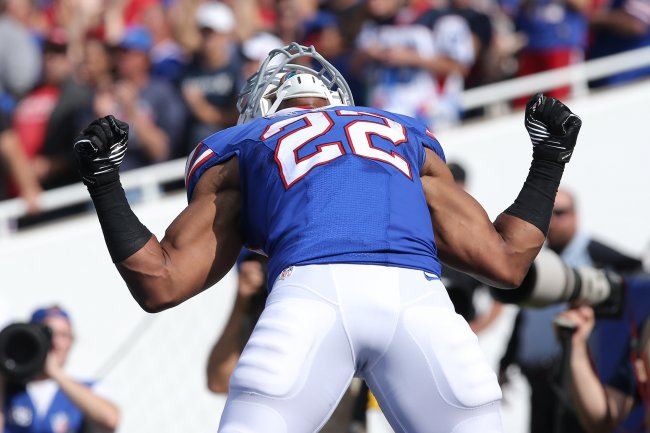 Another week of the NFL season, and another set of injuries causing havoc in fantasy football. That can be plainly seen in the

suddenly wide open Bills backfield. Speaking of runners, there seems to be a changing of the guard in St. Louis and Jacksonville as well, while a goaline back may be emerging in Arizona. We've also go the Seahawks pass catching corps to discuss after the trade of Percy Harvin out of town. Finally, are there any options under center that you should be adding and which of the available tight ends might be worth a look in your league? Ray Flowers explores.

Dunks, 3-pointers and pressure D. The 2014 Fantasy Alarm Basketball Guide has you covered from all angles. Category targets, breakout performers, players to avoid & more than 300 players ranked highlight the offering.

Five in Five as Ray touches on the Redskins QB, Bills backfield, Rams backfield, Jaguars backfield and the Seahawks wideouts.

Johnny Manziel, Browns
Brian Hoyer has been winning games and looking solid doing it. He looked atrocious against the Jags. That's what you call it when a guy completes 39 percent of 41 passes, tosses an interception, and misses a wide open player in the end zone (Jordan Cameron). Hoyer will keep the job for at least one more week, but if Hoyer tosses another stinker out there, and let's recall Hoyer has one game this season with more than one touchdown pass, it could be Manziel time.
Amount to Spend: 10 percent

Colt McCoy / Robert Griffin III Redskins
No. Don't do it. Don't. Kirk Cousins is out thanks to committing turnovers as frequently as you drink a beer while watching a game. We're hearing that Robert Griffin III could be back in Week 8. Even if he it's a couple more weeks before RGIII returns you should pay NO attention to McCoy. A limited player who will forever be a clipboard holder, McCoy benefited from Pierre Garcon doing all the work on the 70-yard score. McCoy completed 11-of-12 passes for 128 yards and that score. Take it away and his 10 completions went for 58 yards. And for goodness sakes, if RGIII is on waivers push hard to add him.
Amount to Spend on McCoy: 1-3 percent
Amount to Spend ob RGIII: 25-35 percent

Kyle Orton, Bills
He makes mistakes, but keeps on chucking it. Orton has turned Sammy Watkins into a weekly play - he's had at least eight grabs for 77 yards in two of the last three games - and he scored on the last offensive play of the game to win it for the Bills in Week 7. Orton completed an impressive 72.1 percent of his 43 passes tossing two scores in the game but he also threw an interception and lost a fumble. With the backfield situation a bit up in the air Orton could be chucking the pigskin an awful lot in the near future.
Amount to Spend: 15-20 percent

Bryce Brown, Anthony Dixon, Bills
C.J. Spiller (collarbone) is done for the year. Fred Jackson is likely out 3-4 weeks with his groin injury. That means Brown and Dixon will be the new 2-headed monster for the Bills - at least in the short-term. Brown is the back to target of the duo. Brown tore up the preseason averaging 4.5 YPC and for his career he's carried the ball 190 times with a 4.6 YPC mark and six scores. Often times he bounces things to the outside, like Spiller, but he's a pretty dynamic runner. Dixon is more of a grinder and it's quite possible that he could steal goaline work (at a minimum). If I had to render a decision on who I would rather have on my team, and that's why they pay me enough money to order the Big Mac and not just a regular cheeseburger at McDonald's, I'd say we would go with a 65/35 split in touches favoring Brown.
Amount to Spend on Brown: 25-30 percent
Amount to Spend on Dixon: 15-20 percent

Travaris Cadet, Saints
We don't know how much time Pierre Thomas (shoulder) will miss, and there are still two other runners to worry about in the Saints backfield (Mark Ingram and Khiry Robinson), but Cadet stepped up when given the opportunity against the Lions catching six of nine targets for 51 yards. If Thomas plays Cadet has no value. If Thomas is out Cadet could produce like he did in Week 7, though there is no upside with the likelihood that he gets no work at the goaline.
Amount to Spend: 5-10 percent

Benny Cunningham, Tre Mason Rams
Zac Stacy got one snap in Week 7. One. He's clearly not going to be seeing the football any time soon. That leaves Benny and Try to be the leaders in the Rams backfield. Mason led the runners with 27 snaps while Cunningham was on the field 19 times (the Rams ran 51 plays). Mason ran 18 times for 85 yards and a score, and he is the back to target here. Still, Mason fumbled late (it was recovered) and he brings nothing in the passing game (if you think Alfred Morris type of runner, you might not be that far off). Cunningham is slightly bigger physically, and a much better option in the passing game (he caught five balls for 46 yards and a score in Week 7). Think of Mason as the early down back and Cunningham as the third down option. Note that the Rams have a tough schedule coming up facing a group of defenses that are strong against the run (Chiefs, Niners, Cardinals, Broncos and Chargers).
Amount to Spend on Cunningham: 20-25 percent
Amount to Spend on Mason: 25-30 percent

Roy Helu, Redskins
Alfred Morris will get all the carries as long as he is healthy. Note that Morris tweaked his ankle Sunday, only carried the ball for 54 yards on his 18 carries, and still doesn't have a 100-yard game this season. It's always better to be proactive with runners that to have to wait and break the bank. Helu would be a solid runner while being a dynamic pass catcher if he ever got 15+ touches a week.
Amount to Spend: 3-5 percent

Dan Herron, Colts
Trent Richardson had 14 carries for 77 yards and caught four passes for 41 yards. He actually looked pretty solid but he tweaked his hamstring in the game. He says he is fine. Believe him? Ahmad Bradshaw is an injury risk no doubt as well, so if you want to shoot for the moon and add Herron for nothing, now is the time.
Amount to Spend: 3-5 percent

Denard Robinson, Jaguars
Toby Gehart (ankle) has not been the answer. Storm Johnson has a rushing score in 2-straight games but he's also averaged 3.2 yards a carry on his 20 touches on the ground and only caught one pass for (-4) yards. Jordan Todman is viewed as nothing more than a third down back. There are questions about "Shoelace" as as converted quarterback, but he was extremely successful in Week 7 carrying the ball 22 times for 127 yards an a score and he's surged to the lead in this muddled backfield situation. Gerhart and Johnson will likely be sprinkled in no matter how much success Robinson has, and either could certainly steal goaline looks as well. The Jags will give Robinson some rope to prove he's worthy of leading the backfield in touches, but it's highly dubious as to whether Denard is capable of handling 20+ touches a week.
Amount to Spend: 20-25 percent

Stepfan Taylor, Cardinals
People keep worrying about the workload of Andre Ellington as the guy is touching the ball an average of 22 times a week. that level of touches though simply doesn't leave a lot of room for any other Cardinals backs to establish themselves. However, one area that Ellington doesn't always excels is short yardage. Enter Mr. Taylor. There is no doubt Ellington is "the man" or that he is a better pass catcher and more dynamic talent in a 1-on-1 comparison. Bruce Arians doesn't mind using a short yardage back though, and the flavor of the week for the Cardinals appears to be Taylor who carried the ball 12 times for 40 yards an a score in Week 7. Taylor has no upside unless Ellington gets hurt but as a goaline vulture, potentially, he might have flex appeal for some.
Amount to Spend: 10-15 percent

Doug Baldwin, Jermaine Kearse, Paul Richardson Seahawks
Scoreboard baby. No, not talking about these guys production - I'm talking the game scoreboard. It was 7-3 Rams after the first quarter and the lead grew to 21-3 which forced the Seahawks to open up the offense to catch up. That likely won't be the case most weeks. Plainly, the Seahawks simply don't through the football. They don't. In two of six games this season, only two, has Wilson thrown 30 passes in a game. Andrew Luck has thrown it 34 times every game and averages 43 passes a game. Wilson has hit 260 passing yards this season - once. Luck has been held to less than 300-passing yards, once. Percy Harvin is gone so there are a few targets to be had, but only Baldwin appears likely to be a consideration as a WR3 each week.
Week 7 results: Baldwin (7-123-1, 11 targets), Kearse (3-50, 7 targets), Richardson (4-33, 5 targets).
Amount to Spend on Baldwin: 20-25 percent
Amount to Spend on Kearse: 10-15 percent
Amount to Spend on Richardson: 5-10 percent

Greg Jennings, Vikings
Jennings caught six of seven targets for 77 yards in Week 7. A strong showing. However, his QB is struggling to find consistency, hardly shocking given that he's a rookie, so it's hard to trust Jennings. Just repeat the following two facts to yourself. (1) Jennings caught eight passes the three games before Week 7. (2) Though he has 70-yards in three games this season, Jennings has yet to hit 80-yards and he's been held to fewer than 35-yards three times.
Amount to Spend: 10 percent

Kenny Stills, Saints
Drew Brees threw for 340-yards for a third straight game and Jimmy Graham did nothing as he was limited with that ankle issue. Up stepped Stills who got loose for a 46 yard touchdown in the third quarter on his way to five receptions, 103 yards an a score. Still, Stills (knew I could find a way to get that in the piece) only had five targets and has just 15 receptions through five games. He's a dynamic, field stretching talent, but he's just not used enough to start him with any level of confidence.
Amount to Spend: 5-10 percent

Jeff Cumberland, Jets
The Jets added Percy Harvin and he will take a ton of looks in the offense one would have to figure. The Jets offense can't even sustain Jace Amaro each week. Do you think it can offer two tight ends of note? Hell no. Leave Cumberland and his 50 yards an a score on the wire.
Amount to Spend: 1-3 percent

Gavin Escobar, Cowboys
Pablo Escobar, wouldn't it be great if Escobar dropped to his knees and snorted the goaline after his scores?, scored for the 'Boys. Escobar scored twice. Two times. Coming into the game Escobar had scored three times in 21 career games. He also had 13 receptions. Great game. You missed it. Let it go.
Amount to Spend: 3-5 percent

Jermaine Gresham, Bengals
No A.J. Green. No Marvin Jones. No blocking by the offense line leading to no points and 32 yards net rushing. That led to 12 targets for Gresham, and he caught 10 of them. However he produced a sickly 48 yards. How is that even possible? Gresham had nine receptions on 12 targets the previous three games. He had 10 on 12 in Week 7. Not interested.
Amount to Spend: 5 percent

Cooper Helfet, Seahawks
Come on. Zach Miller and Luke Wilson were both inactive and Seattle fell behind by 18 early. Leave Helfet on waivers... don't chase points.
Amount to Spend: 1 percent