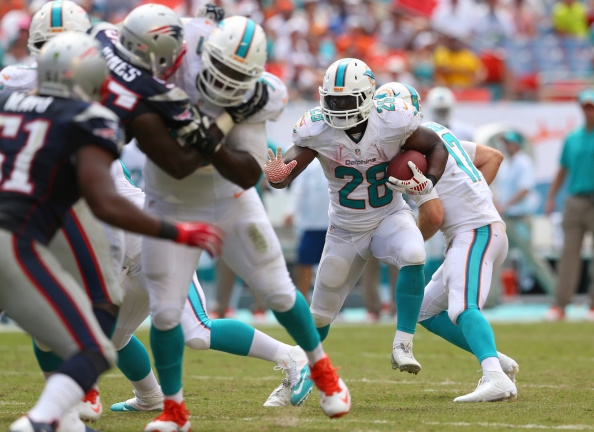 I was in Vegas. You might have heard. Didn't mean that I wasn't watching/breathing/living Week 1 of the NFL season (for some pictures of the weekend see Vegas, Fun & Baseball). What did I glean from the efforts of the warriors of the gridiron in Week 1? Here is what the Oracle was able to see.

Dwayne Allen is not only a more complete football player than Coby Fleener he's also going to have a better fantasy football season. Still nothing more than a TE2 but there will be weeks where he comes through (as he did in Week 1 with four receptions for 64 yards an a score).

Tayvon Austin isn't going to get it done. He carried the ball three times for five yards and caught three balls for 34 more. Move on. Just not happening. Teammate Brian Quick caught seven of nine targets for 99 yards. He's on the WR4 radar even in a Rams offense that appears to be in danger. Could be a sneaky WR3 some weeks.

Wait, wasn't Le'Veon Bell going to lose tons of work to LeGarrette Blount? The backup did score but Blount had six yards on four carries. Meanwhile Bell dominated the Browns with 21 carries and six receptions. He went for 187 yards from scrimmage an a score. No debate here – Blount is only a handcuff. Period.

Tom Brady looked lost in Week 1. Well, at least the Patriots' offense looked lost in Week 1. Brady  threw for 249 yards an a score but he also lost two fumbles and completed just 29 of 56 passes as the offense disappeared in the second half for his club. It should get much sharper, but this was a rather troubling outing.

Dez Bryant caught four balls for 55 yards in Week 1. He and his teammates just didn't show up against the Niners. Someone called me out on Twitter saying I was an idiot for suggesting drafting Bryant as their WR1. Heard of sample size folks? Bryant will be an elite player this season. If his current owner is panicking you should pounce.

Charles Clay will be hit or miss but he'll have plenty of nice games. Don't sour on him too much after a two catch, 27 yard effort in Week 1.

Andy Dalton is blah. People think that despite 30+ touchdowns last season. They likely still think that right now after a Week 1 effort that only resulted in one passing score. I see 301 yards and a 69.4 completion percentage though, and those are elite numbers.

Eric Decker caught five balls for 74 yards in Week 1. That's the type of weekly production you should be happy to get from Decker with the Jets. Would be shocked to see him not see significantly more looks moving forward though (he caught all five of his targets).

I wouldn't be so quick to run to waivers to add Justin Forsett. He's 5'8”, 197 lbs, and it's not like he's known for moving a pile. He's a limited football player who should be a third down back. I mean, seriously folks. This is Justin's sixth NFL season and the last three years he has 115 carries – for three teams. You really think he's going to turn into a weekly play with the Ravens? I'm still bullish on Bernard Pierce. Can't believe the team benched him after his first career fumble though, but that certainly causes me some pause as the team simply isn't sold on him apparently. At the same time, Forsett just isn't an every down back. We may have forgotten about him by Week 8. Don't go overboard with your FAAB bidding.

Shonn Greene ran for 71 yards on 15 carries. That's the type of production you get from a boring runner. At the same time 16 outings with numbers like that would get you 240 carries and 1,136 yards. Who wouldn't take that in their fantasy backfield?

Robert Griffin III threw for 267 yards and completed 29 of 37 passes for 267 yards. If he were to do that all year he would set and NFL record with a 78 percent completion percentage while throwing for 4,272 yards. Was he really that disappointing, statistically speaking, in Week 1?

Allen Hurns blew up in Week 1 for two scores, four receptions and 110 yards. He also caught 44 percent of his targets, only saw a significant role because Cecil Shorts was injured, and would have to be considered the Jags WR4 when the unit is healthy. You don't want to be counting on a WR4 from an offense like this. Hurns will offer no consistency.

Maurice Jones-Drew simply doesn't have his burst any longer. Darren McFadden still has his. Hopefully he is able to stay healthy so he can grab a larger role from the no longer has it MJD.

Colin Kaepernick threw for 201 yards and a scores. He also ran five times for 11 yards. If the Cowboys hadn't looked like a JV squad Colin would have exploded for well over 300 yards one has to think. A strong first showing after a rough preseason.

Travis Kelce should see his role grow, but the Chiefs offense is not going to impress. The line is a mess, they really don't have any weapons outside and Alex Smith cannot win games on his own or significantly lift the play of his teammates.

Andrew Luck threw 53 passes in Week 1. He's going to throw the ball more than most expect which is why he's got a great shot to be a top-5 QB.

Marshawn Lynch being washed up, or passed up by younger backs with the Seahawks, was one of the most overblown stories of the preseason. Lynch ran for 110 yards and two scores on 20 carries in Week 1.

Jeremy Maclin only caught three of nine passes in Week 1. Oh he had four receptions on 10 targets, but on his long score he was so uncovered I'm not going to count it (he was literally open by more than 10 yards). I wasn't overly impressed with his effort, nor that of Nick Foles who's first half was pretty brutal.

Knowshon Moreno has already come full circle, and we've played one week. Moreno dominated the Patriots carrying the ball 24 times for 134 yards an a touchdown. He's an injury risk but he's certainly well ahead of Lamar Miller in the pecking order with the Dolphins. Drafted as a RB4 by many, Moreno might end up as a RB2.

Alfred Morris had all of 9.10 fantasy points. Whoppie. It certainly doesn't sound like much, but you do realize that is what you get when you carry the ball 14 times for 91 yards. He looked pretty darn sharp. Expect plenty of efforts like this one from the runner.

Cordarrelle Patterson I still don't trust. I know he was a top-10 wideout in Week 1, but he saw five passes and only secured three of them for 26 yards. Until he learns to catch the ball with his hands, and to sharpen his route running, his value will be completely dependent on his YAC talents (which are immense). He needs to be more involved in the passing attack to live up to expectations.

Tony Romo looked like an 18 year old against a beat up Niners club throwing three picks (all the interceptions came on roll-outs. He didn't throw one interception on roll outs last season). Still completed nearly two thirds of his passes for 281 yards. Keep the faith.

Antoine Smith only touched the ball three times but he produced 61 yards an a touchdown. He simply isn't involved in the Falcons offense enough, but he's got impressive skills. He makes things happen.

C.J. Spiller had 15 carries and three receptions for the Bills on his way to 64 yards an a score. We were hoping for better against the Bears, but the 18 touches is probably the most important thing to take away from the contest. Maybe, just maybe, the Bills are starting to see the light?

Mike Wallace went for 7-81-1 on 11 targets. He fumbled and looked a bit spotty at times, but he also showed fire and even played physically at times. He's going to put the 73-930-5 effort from last season behind him. Squarely on the mid WR2 radar is Wallace.