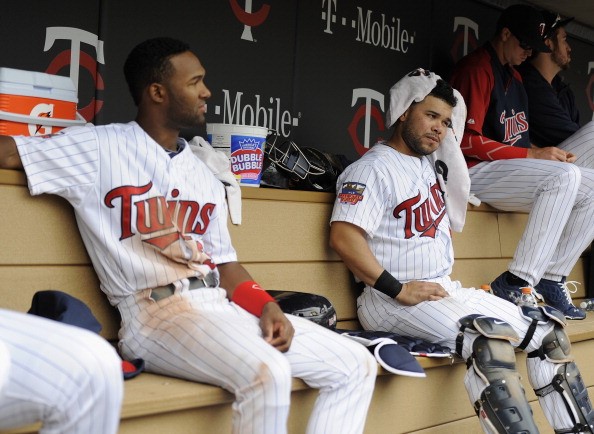 Daniel Santana is a 23 year old shortstop/outfielder with the Twins. He's been getting time in the outfield, even if he's not exactly a wonder with the glove, but the switch hitter has been doing some damage with the bat. Are we witnessing the birth of an effective major league hitter or is this merely a hot run that will be quickly forgotten?

He's only been up in the majors for 23 games this season and he's killed it. He's hitting .364, has a .902 OPS, has stolen four bases, driven in 11 and scored four times. Things couldn't have gone any better for him.

Santana has hit .274. That's passable for a middle infielder of course, but it's nothing to get excited about in fantasy.

He has a .318 OBP. This is below par, below the big league average, and is not good. It also speaks to his terrible approach at the dish in which he seems to think walks are a bad think. Maybe that or Adam Jones is his hero? In 545 games in the minors Santana has 122 walks. Per 500 at-bats that equates to 29 walks. Pathetic, flat out. When the hits stop falling, and make no mistake that will happen (32 percent line drive rate and .473 BABIP with the Twins), he won't get on base and that will lead to a vacuous fantasy effort. Moreover, dude strikes out a good deal for a  guy who has no power. Per 500 at-bats in the minors he has struck out 101 times. Not a terrible number, but when combined with no walks the result is a pathetic 0.28 BB/K rate. When you don't have power and your game is about speed you need to get on base to show off your talents. Santana doesn't really do that very well at all.

Power? Nope. He's hit 25 homers over 545 games. Just not his game and it won't be at the big league level either.

The speed I spoke of is intriguing in certain setups. Still, he's no exactly done a good job proving he knows how to steal a base. Lots of guys are fast. That's all he is right now, a fast guy. He really doesn't know what he's doing out there. In 170 steal attempts in the minors he stole 117 bases. That equates to a success rate of 69 percent. Studies prove that you have to have a success rate of 67 percent or you're actually hurting your teams chance to score runs. In essence, all the running he's done during his minor league career has barely helped his team out at all. Unless he learns the art of base running his speed is going to go to waste cause the Twins aren't going to give him the green-light if he keeps getting caught.

As I noted at the top, Santana is really a shortstop who has been asked to play in the outfield because of the continual production woes, and now shoulder issues, of Aaron Hicks. With Kendrys Morales now in the fold (see his Player Profile) the DH spot is set. When Sam Fuld is over his concussion woes it's possible that Santana will shift back to shortstop pushing Eduardo Escobar back into a utility role. It's quite possible that Santana sees significant work at the shortstop position. In fact, he might end up being the every day shortstop for the most of the rest of the 2014 season if things go as planned for the Twins.

I'm shocked at the number of questions I've been getting about adding Santana. I understand it, he has 11 hits in his last five games while he's driven in eight runs while stealing two bags. At the same time, that week of production totally belies who he is. Who is he? He's a moderate (at best) hitter with no power, no idea of how to get on base, and no power (wait I already said that didn't I?). Yes he can steal a base, but with a poor OBP and little understanding of pitchers, well, let's just say he's got nowhere to go but down from here.

10 team lg: If you want to add him while he's hot, play that game, fine. But he won't be starting for you in a month.

12 team lg: Can't see how he should be viewed as anything other than an injury fill-in.

15 team lg: If desperate for speed maybe you can add him, but again, he's simply not a very good hitter and will likely be cast adrift unceremoniously as some point in the near future.

AL-only: Because of his steal potential, and the fact the he's a dual position qualifier in many leagues (SS and OF) he has real value. Even if he's asked to fill a part time role and the bat slows, he should still steal enough bases to maintain a level of interest.