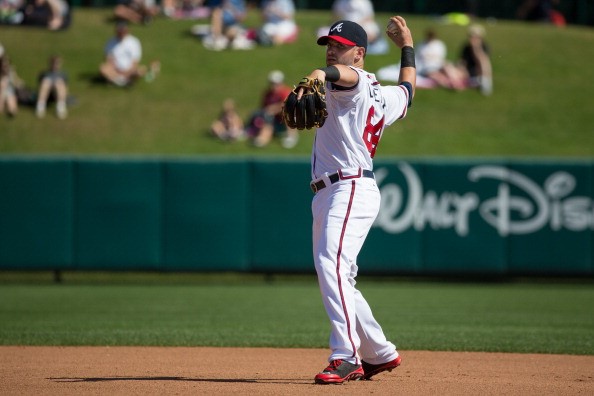 Tyler Pastornicky was sent to Triple-A Gwinnett. Dan Uggla can't hit anymore. Enter Tommy La Stella, the Braves second baseman of the future. Can he be the second baseman of he present? We'll explore that question in his Player Profile.

As noted in the intro, Pastornicky is no longer around. As for Uggla, he's hitting .177 giving him a .178 batting average over his last 170 games. It's amazing that he's been this bad for that long. Whereas you could always count on him for homers, he's not been delivering there this year at all with only two big flies in 113 at-bats. He's also only walked nine times leading to a .254 OBP, .055 points below his mark last year. He's awful and the Braves know it. They need some offensive production from second base. To this point they haven't gotten it. At all.

So who is Tommy La Stella? Let's break him down.

La Stella was an 8th round selection in 2008. Most have him ranked as a top-10 prospect at the second base position – offensively. Defensively he's a bit suspect so the bat is going to have to be his ticket to regular playing time.

He stands 5'11” and weights about 185 lbs. That's as average as you can get. He is athletic though, and he's got a nice approach at the dish.

Power, what about that? Sorry folks but he's got none of that, at least not if we're talking the big fly. La Stella has hit a total of 21 homers in his minor league career. He doesn't lift the ball either, his minor league fly ball rate is 31 percent (the league average is about 35 percent). Given his size and stroke, we're likely talking about 15 homers being his upside with a guess in the 8-12 range likely to be fairly accurate (that's over a full season, not the rest of the way this year).

He's stolen 24 bases in the minors. He doesn't project out as anything other than an 8-12 steal guy in the bigs. Steals will not be his calling card.

So far he's looking a lot like Howie Kendrick or Martin Prado.

What about the batting average? There's La Stella has a chance to be someone significant, though again, Kendrick/Prado are likely the upside – with a bit more in the walk category. Over 288 minor league games La Stella has hit .322 with a .407 OBP. Those are excellent numbers. He sprays the ball all over the field, has averaged 32 doubles and seven triples per 145 games, and as long as he maintains his approach he should continue to have success. He's also seemingly always in control with a superb 1.33 BB/K rate. Superb. It's been even better this year at 1.79 over his 47 games at Triple-A. Two slight downers. La Stella was hitting “only” .293 at Triple-A this year, and for his minor league career his line drive rate is only 18 percent, slightly below the 19-20 percent big league average. Just something to file away.

La Stella appears likely to get a legit shot to run with the Braves full-time gig at second base. On the downside he's already 25 so it's unlikely we're going to see any growth in the power or speed department. As such, he's likely only going to be a moderate option in the homer and steals categories. On the plus side, he's control/understanding of the strike zone is excellent, and his talents here will so dwarf what Uggla has done of late that he'll likely look much better even if he's not producing. La Stella will put the ball in play, shoot the ball into the gaps, and hustle like the dickens. It's not fair to expect a youngster to hit .300 as a rookie but you can say that if everything breaks right for La Stella that he could literally hit .100 points higher than what the Braves were getting from Uggla. Finally, a lot of La Stella's value will ultimately depend on where he hits in the order. If he bat second he could score a ton of runs. If he's hitting 7/8 in the order (he hitting 7th in his first game), as a guy with little power and little SB speed, he's not going to be of much use in most mixed leagues.

12tm mixed: Could add, but depends on format. If you don't have middle infield options he's not very intriguing. If you do use the MI you can add. Just don't do something stupid like dropping Kendrick to do it.

15tm mixed: Pretty much a certain add. The amount you fork over to add him to your roster will depend on who you already have up the middle and how desperate you are at the position.

NL-only: A must add if available. Worthy of a substantial FAAB bid since he could start the majority of the games the rest of the way if he has his hitting shoes on.