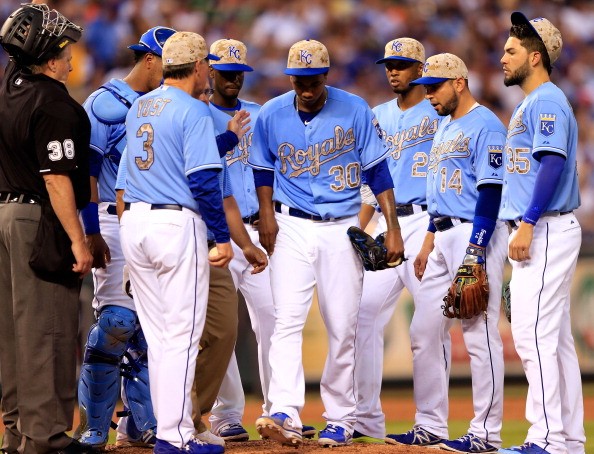 What do you do if you own Yordano Ventura? Can you trust Hanley Ramirez? Will Domonic Brown ever hit again? How long can Derek Norris keep this up? Is this Collin McHugh kid for real? Does Charlie Blackmon really stink as much as you think he does? All of that and more in this weeks mailbag column.

Each Wednesday I'll answer your questions which you can send to me at @BaseballGuys on Twitter.

FIND OUT HOW TO GET ALL OUR INSEASON BASEBALL COVERAGE WITH THE ASSISTANT GM PRODUCT.

The Royals say Ventura will be fine and likely only miss a start with the valgus stress overload in his elbow (uh huh). GM Dayton Moore said that Ventura, and this is actually true, will have to learn how to reduce his velocity early in games. Seriously? This isn't thoroughbred racing where you can hold back the reigns out of the gate before cutting the horse loose to charge down the stretch. If Ventura goes from throwing 97 mph to 92 early in games guess what is going to happen? He's not going to go deep enough into games to reach 97 mph. What an asinine statement to make. If Ventura does do that, watch his production slide.

Vogelsong has been one of the best pitchers in baseball in May. Seriously. He has a 1.64 ERA, 1.03 WHIP an 29 Ks in 33 innings as he's held batters to a .205 average. Before you get all giddy realize the following. From April of 2013 through April of 2014 Vogelsong looked lost, like his career was nearly over lost. Over 24 starts he had a 5.67 ERA, 1.56 WHIP and he struck out less than six batters per nine while walking 3.40 per nine. He was hideous. He's been sharp in May no doubt, but does that erase 24 starts over the previous calendar year? Even if it does in your mind note that Vogelsong is still just a league average arm who never brings the punchout like he has the last month.

I'm not suggesting you have to hold Ventura in a 10 team league, but Vogelsong really isn't this good and is nothing more then replacement level in a league this shallow. Your call based upon how the roster looks, but I'd likely hold Ventura and hope he's physically able to perform.

– Jean Segura or Hanley Ramirez rest of the way?
@B_SDavis

Over the last six games Segura has produced two hits five times. He's also scored seven runs while stealing two bags. Let's not get too far ahead of ourselves. Segura is still batting just .273 and has only stolen 10 bases in 16 tries. He's also hit a mere two homers, driven in only 14 and scored 26 times. He's talented, I'll give you that, and he's going to steal more bases than HanRam who has returned to action from yet another injury. Still, there's no doubt who the better hitter is, and he plays for the Dodgers. The only reason you should side with Segura is if you are desperate for steals or you believe the Hanley is on the cusp of blowing something out resulting in a DL stint. It's Ramirez for me, all day.

– Drop Billy Butler for Derek Norris. I have Jonathan Lucroy who can play 1B. 12 team mixed league.
@yfilm

First off, if you only start one catcher it's almost universally a bad idea to be playing one at any other position other than as just a fill-in here and there. Second, Norris has been spectacular this season hitting .314 with five homers, 24 RBIs, 16 runs scored and two steals. That's certainly worthy of adding  even if it pushes Lucroy to first base. Two things. (1) EVEN IN A ONE CATCHER LEAGUE HOW IS NORRIS ON WAIVERS? I literally got about 14 questions yesterday on Twitter like no one realized Norris was good until just now. (2) He's not this good. Over 492 minor league games he hit .253. He does have 20 homer power, and he knows how to get on base extremely well (.394 OBP in the minors), but the batting average level he's currently at is something he has never shown previously (note he hit .223 over his first 473 big league at-bats). He's also always been a guy who strikes out once a game so pretty tough to buy that he's gonna maintain his 1.17 BB/K ratio (18 Ks in 42 games).

Butler on the other hand has a track record of success in the bigs. A career .296 hitter, Butler is off to a painful start, especially when compared to Norris as he's hitting .240 with one homer and 20 RBIs. Butler has picked it up a bit the last nine game hitting .303 with five RBIs and seven runs scored.

I'm a big fan of Butler, but the fact is that if your league has left Norris on waivers this long you might as well pick him up and drop Butler. Who in your league is going to add Butler if no one made a move this long on Norris?

– Charlie Blackmon just got dropped, worth picking up at the sake of dropping Anthony Rendon or Starling Marte?
@Ludiker

Shocking. A month ago people thought Blackmon was going to win the MVP. Now they are dropping him – en masse. At this point, here is Blackmon's pace: .321-27-99-105-27. That's Carlos Gonzalez folks, and Blackmon is being dropped in leagues everywhere? Is he going to win the MVP? Of course not, and I told everyone that six weeks ago. Has he slowed in May? For sure. Is he as bad as you think? Nope. Even if we give him six months at his May pace we'd still be looking at a guy who would hit .261 with 24 homers, 90 RBIs and 72 runs scored. You really want to kick that to the curb when that same guy has hit .300 over the course of 684 big league at-bats and when he plays in a home park in which the Rockies team, the TEAM, has an OPS of .952? At worst you just play him at home.

I don't want to drop either guy here, but I'd likely let Rendon go first. He has dual position eligibility which is nice, but his average is down to .254, his OBP is .315, and his early season power surge has predictably waned as he has one homer in May. He's a nice piece, don't get me wrong, but I'd take the shot on Blackmon. You could drop Marte if your outfield is deep, but he does posses the impressive base stealing prowess which always buoys his value even when he's struggling to do much at the dish.

– Looking to drop Domonic Brown and pick up Oswaldo Arcia, is he worth taking a shot on?
@Feenerschnitzel

This one is easy. Read Brown's Player Profile from the offseason. Read my article on Arcia titled Memorial Day: Hitter Review.  Note that Brown is batting .206 with a .567 OPS and three homers and that he has hit a total of three homers over his last 75 games. Who could of guessed... oh wait, I did.

– I noticed Collin McHugh is available do I pick him up? Should I drop Jaime Garcia?
@rcastle73

Garcia? I'm shocked I get so many questions about him. He sucks. Am I the only one who seems to notice he's completely replacement level talent who has an extensive injury filled background? Over the last two an a third seasons he's made 31 starts. That's the total a starter should make in one year. His career ERA is 3.46. His career WIHP is 1.32. His career K/9 is 7.17. Those are all league average numbers. Yes he gets grounders but this guy has been a starting pitcher since 2010 and has one season of 165 innings.

I don't “believe” in Collin, but he's gotta be better than Garcia.

You can follow Ray Flowers and send him your thoughts on Twitter @BaseballGuys. For up to the minute baseball reports on trades, injuries, lineups etc. see @FantasyAlarm.