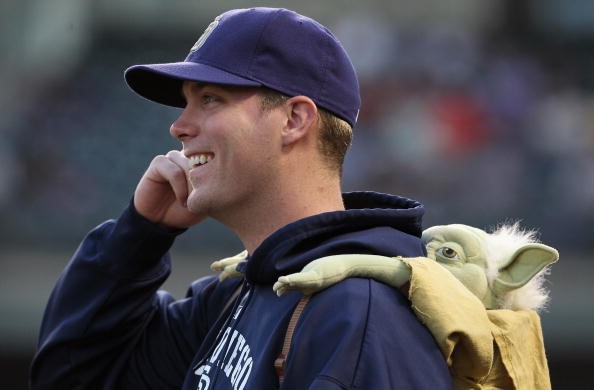 Everyone is interested in adding the new thing. Apparently, we're in an age where stability matters little. Instant gratification is what we want. We don't have money to make our car payment, but you bet your ass we've got $5 to buy lottery tickets. Seems a bit backwards to me. Regardless, that's the mentality of many and it's why I'm constantly inundated with questions about minor leaguers and rookies. To that end, I thought I'd offer a preemptive strike and break down the next big thing on the hill, funny to say given his size, in Marcus Stroman. There's also two situations in the 9th inning that might be starting to coalesce with the Astros and Cubs, so I'll give my thoughts on each situation.

Marcus Stroman is the next rookie hurler I'm likely to be flooded with questions about. So in order to preemptively strike, here goes.

What did Yoda say... judge me by my size do you? You shouldn't make the same mistake as Luke Skywalker.

Stroman doesn't beat himself with walks, and as you can tell with the strikeout numbers he's got a fairly dynamic wing.

Stroman projects as a #2/#3 starter in the big leagues. There will always be questions due to his limited size (think Johnny Cueto), but with a plus fastball and superb slider, he's got the look of a keeper (he eventually could end up in the bullpen if he can't figure out this starting thing, but that's likely years down the road in any case). He's also had his minor league schedule adjusted so now he's working the same day as Dustin McGowan who has been awful (6.88 ERA, 1.82 WHIP, 17 innings in four starts). A promotion could be coming, and soon. When it does Stroman is a must add in 15 team leagues (I've gotta a couple of questions about whether he should be added in AL-only leagues. Good grief. He should have been drafted once the rounds hit 20). If you're in a 12 team league, all depends who you drop, but Stroman has the talent to help there as well. Those in 10 teamers... probably can do just as well on waivers, but the wing of Stroman is impressive.

Don't know if you've heard, OK you probably haven't, but we're going to be releasing updated Player Rankings on the first of each month. That means we're just a couple of days away from the May 1st update. Stay tuned. The rankings are coming!

Raul Valdes is 36 years old and you've never paid attention. Might have to change that line of thought now.

Over the weekend Valdes picked up a save for the Astros. The next day he was also called on to record the final out of the game (there wasn't a save chance Sunday). The Astros bullpen is crowded and there's been nothing coming from the team other than the 'we're using a bullpen by committee.' Still, some thoughts.

(1) Hard to think Valdes was called on 2-straight to get the last out unless it means something.

(2) Look at the relievers numbers.

Valdes is worth a speculative add if he's on waivers but we might just as easily never hear from him again after a couple of days so be cautious.

A Must Read on velocity from Jeff Passan of Yahoo.

Like with the Astros we don't have anything official with Cubs, but it appears that one man has emerged in the battle for 9th inning duties. It's not Jose Veras who is hurt and on the DL. It's not Pedro Strop either. That man, the man to add, is Hector Rondon.

Issue #1: He's not really viewed as a K per inning type of guy.

Issue #3: The team would still like to build up the value of Jose Veras so they can trade him. Once healthy, does that mean he gets another shot in the 9th inning?

Like Valdez, the smart play is of course to add Rondon. If I have to chose between the two I would go Rondon over Valdes.

Around the Twitterverse, Sunday, April 27th

MT @BRefPlayIndex: #Yankees Masahiro Tanaka is 2nd ever with double-digit strikeouts in three of his first five career games (Mark Prior).