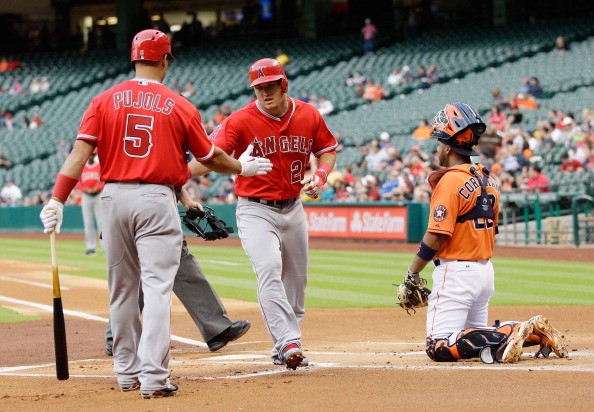 You would also be wise to bookmark the following three sources to check daily after you read this wondrous piece (I'm so afraid of giving myself props).

Daily Projections – For every single day of the season.

DISH DIAMONDS – The Best Hitting Matchups of the Day

Brewers versus Lance Lynn. It's an extremely small sample size we're looking at here, but check out these numbers: .667, .500 and .400. Those are the batting averages of Scooter Gennett (six ABs), Jean Segura (10 ABs) and Ryan Braun (10 ABs).

Derek Norris faces lefty Hector Santiago. For his career Norris' whacked the ball all over the yard against lefties as he's hit .274 with an .840 OPS over 241 at-bats. Check out the 11 homers and 40 RBIs too.

Want to play a hunch? With Ryan Ludwick striking out 14 times in 46 at-bats versus Wandy Rodriguez, check to see if Chris Heisey is in the lineup for the Reds. He's hit .304 with three homers against Wandy in 23 at-bats.

Jhonny Peralta has been atrocious to start the year with the Cardinals. Just awful. He starts to pull out of it Monday as he gets to face Matt Garza who he has 11 hits against in 25 at-bats (.440). If he doesn't, all hope might be lost. Well, something like that.

Brandon Phillips has hit just .254 with a . 694 OPS against Wandy Rodriguez in his career. Still, he had three more hits Sunday to push his average up to .327. He has 11 hits in his last five games.

Giancarlo Stanton is on pace for like 200 RBIs this season. He's also taken Jordan Zimmermann deep three times in 19 at-bats and Jordan is coming off an outing where he allowed five runs while picking up all of five outs.

Justin Upton is out of control hot. Pretty sure that Roberto Hernandez is going to struggle to keep him down. How hot? Upton has hit .591 with four homers, eight RBIs and eight runs scored over his last 22 at-bats.

Ben Zobrist takes on Wei-Yin Chen and that has always led to success for Mr. Ray as he's racked up 10 hits in 23 at-bats (.435). Zobrist also hit two bombs Sunday.

Jay Bruce The numbers speak for themselves: three hits in 35 at-bats with 16 strikeouts versus Wandy Rodriguez. He's damn near struck out in half his at-bats folks.

Marlon Byrd is not enjoying his at-bats when he takes on Ervin Santana as he's struck out eight times while batting .185 in 27 at-bats.

Billy Hamilton is awful. There, I said it. He left five men on base Sunday and went 1-for-5 to prop up his average to .154. That's 11 games played with two runs and two steals. Doesn't matter who he is hitting off right now. He stinks.

Pirates versus Homer Bailey. The following Pirates have at least 10 at-bats versus Bailey while failing to hit .180: Starling Marte, Pedro Alvarez, Neil Walker and Jody Mercer.

Howard Bender and I went out Saturday night in San Francisco. Some highlights. (1) Hobos at BART station. (2) Swanky drinks (with Absinthe) at the bar with a gal who told me how much she loves Tom Brady. (3) Quail eggs for dinner. (4) Way, way too many vodka red bulls. (5) Glow sticks. Well a glow necklace. That's right... the Oracle knows how to party.

Casey McGehee has two RBIs in his last nine games.

Adam LaRoche has had a strong start to the year. However, he faces lefty Brad Hand Monday and LaRoche has never been overly impressive against lefties in his career (.245/.300/.429).

Albert Pujols is hitting a meager .211 if he falls behind in the count 0-1. He will face Jesse Chavez who has thrown a first pitch strike 69 percent of the time, a top-10 mark in baseball in the early going.

Will Venable has been dropped to 8th in the order and he's pretty much lost at the moment at the dish. He started out the year 4-for-32 versus righties (.125) and he faces right handed Jordan Lyles Monday.

Ervin Santana tossed eight shutout innings in his first start of the year for the Braves. He's had a 3.12 ERA over his last 33 starts with a 1.10 WIHP. Current Phillies batters have also hit .160 with 18 Ks in 50 at-bats off him.

Eric Stults pitches at home versus the Rockies. Do you know what his numbers at Petco Park are for his career? Try on for size a 10-5 record, 3.18 ERA and a 1.12 WHIP over 22 starts.

Zack Wheeler has actually pitched much better on the road than at home in his young career (2.73 ERA, 1.28 WHIP over 10 starts). He takes the bump in Arizona Monday.

Chris Archer will face an Orioles club that could run out there Chris Davis, Nick Markakis and Matt Wieters, three strong left handed batters. Archer has struggled versus lefties a bit with a .266/.344/.472 line in his young career. The game is also in Camden Yards bringing up another level of concern for Archer.

Wei-Yin Chen has allowed eight runs over 10.2 innings. He hasn't walked anyone, but that's all that can be said positively at the moment. Sit him against the Rays who he was only able to last 4.1 innings against in his last start against them.

There is no truth to the rumor that nacho cheese makes keyboards work better. I ran a test. #NachoFail

Lance Lynn has not pitched well on the road in his career. He has a 17-10 record which plays, but the 4.59 ERA and 1.44 WHIP aren't exactly impressive. He pitches in Milwaukee Monday.

Make sure you tune in to the Fantasy Alarm's Daily Game Show at 6 PM EDT, Monday through Friday on SiriusXM Fantasy Sports Radio (Sirius210, XM87) as Jeff Mans and Ted Schuster will help you to set your daily lineups.