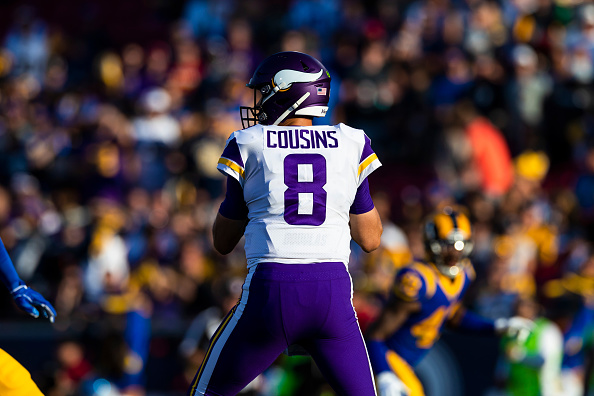 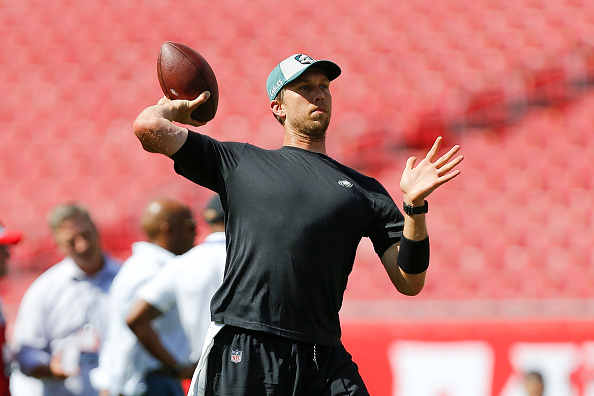 It is no secret the fantasy magic that Nick Foles almost inexplicably wields when the weather gets cold, but now that he’s going to play where it is almost always hot, will he suddenly lose his luster? Sure, it’s exactly this type of narrative based theorizing that we like to avoid in fantasy football, and admittedly it was said in jest, but there is a real question to be raised now that he is no longer in the Eagles cutting-edge offensive system. As we have seen in the past, Nick Foles is a guy who has historically struggled as a regime-backed franchise face, and now that he has the full responsibilities of a starting NFL quarterback and is being paid like a Pro Bowler, will he wilt as he did when given the same opportunity with the Rams in 2015? While many believe this to be the case – including ESPN’s Matthew Berry, who has Foles ranked as only his 27th best fantasy quarterback headed into the summer – take a second and hear out the argument that Foles will be better than his current ADP.

Sure the Jaguars aren’t as flush with offensive playmakers as they once were just a few years ago, but they do have some exciting names to get the ball to, most notably former college superstars Leonard Fournette , Dede Westbrook , Marqise Lee , D.J. Chark , and Josh Oliver. Beyond that, the Jaguars biggest offensive issue last season – aside from Blake Bortles of course – was lack of health along the offensive line. This season they will be getting back all of their hog mollies, fully healthy, after missing three-fifths of their starting line last season – two of which were Pro Bowl caliber.

Along with an underrated offensive roster collection, this season Foles will be reunited with former quarterback coach and career mentor John Defilippo. You might remember Defilippo from his work with the Eagles in 2017 as he is often credited with preparing Foles to replace Carson Wentz late in the season and is ultimately regarded as the chief engineer in the Eagles eventual Super Bowl victory. Now as the Jaguars offensive coordinator, Defilippo will bring along a very similar system that helped Foles thrive in 2017 and allowed him to post a Week 16 stat line last season of 471 yards and four touchdowns.

If you were at all plugged into the NFL and its corresponding storylines last season, you would  have come away with the belief that Kirk Cousins ’ debut season in Minnesota was a colossal disaster. Sure, his record-setting contract wasn’t exactly paid off with a Super Bowl appearance in year one, but when you look at the numbers – which is all that matters in fantasy football – Cousins had at least a rock solid 2018. In all, Cousins threw for nearly 4,300 yards, compiled 30 passing touchdowns, and threw only 10 interceptions. Those numbers were good enough for him to finish as the 12th best fantasy quarterback last season. On the surface that is good enough, but looking forward to 2019, understand that Cousins will be playing behind a much improved offensive line – something that the Vikings desperately needed – and he will be getting back a healthy Dalvin Cook to operate out of the backfield behind him. Oh, and lest we forget that he still has a Pro Bowl tight end in Kyle Rudolph (not to mention that they also just drafted Irv Smith Jr.) and arguably the best wide receiver duo in the NFL to throw to in Adam Thielen and Stefon Diggs . He’s surrounded by talent and in theory should only improve in 2019 with the offensive additions this offseason. Expect him to finish closer to the top-10 and not as the 20th best quarterback as most sites have him ranked this preseason.

Unlike other “sleeper” arguments, this one doesn’t need to take a deep dive into the numbers. It is no secret that over a five-year span, Le’Veon Bell was as good as it ever got at the running back position in fantasy football, and while many want to blame the Steelers favorable offensive system, we’re not here for it. Yes, the Jets are a step down in terms of supporting talent, but that may be a positive for Bell – a guy who thrives with a high volume of touches. Coming off of a full season of rest, don’t be surprised when he finishes as a top-six back, as opposed to Matthew Berry’s barely top-15 preseason ranking of Bell. 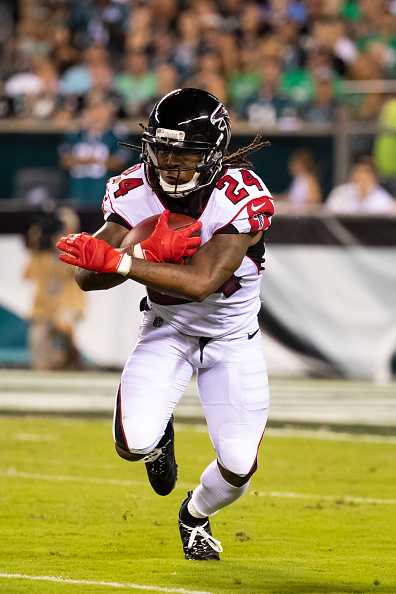 Freeman appears to be a back that many are prepared to forget, but do your best to remember how good he was prior to his injury-riddled 2018. All while evenly splitting backfield touches with Tevin Coleman , Freeman was a consistent top-10 fantasy back for all of 2015-17. Now, Coleman is gone and the belief is that Freeman will finally have his chance as a fully featured back. Expect him to easily threaten 15 total touchdowns this season, while 1,600 all-purpose yards is well within range as well. Those numbers alone should have him finish well above his preseason ADP as the 19th best fantasy running back (according to fantasypros.com).

A James Conner clone, Montgomery runs with a never-say-die attitude and boasts a body build  to back it up. Despite his hulking size and limited top-end speed, he’s very capable as a receiver of the football, while he unsurprisingly shows up in spades as a pass protector as well. Because he was not the first back off the board this past April, Montgomery will go overlooked by the casual fantasy football player, however be smarter than them… Here’s your chance to grab a lead, every-down back, operating out of one of the more advanced offenses in the league. Right now, his ADP is somewhere in the low 30’s, however it would be shocking if he finished 2019 outside of the top-20 fantasy running backs.

We were super high on Ballage last season, and while it took a bit longer than expected, he eventually showed what kind of fantasy potential he really has. In Week 14 of 2018 – after climbing all the way up from fourth on the depth chart – Ballage needed only 12 carries to amass 123 rushing yards and a touchdown. He has rare explosiveness for his bulky build, while his underrated receiving skill-set is something else that should show out this season. Headed into 2019, all that is in Ballage’s way is a career spell back in Kenyan Drake . He should win that job out of camp. While Miami is clearly not the team you want a lot of your fantasy players to come from, it is irresponsible to write off a potential starting back, especially one as talented as Ballage.

If you are looking for this year’s Phillip Lindsay , look no further than Justice Hill, as his college game tape is almost a carbon copy of Lindsay’s rookie season with the Broncos. It is no secret that the Ravens running back stable is a bit on the crowded side, but we’ll take our chances on a talent like Hill operating in an offense that runs the ball more than any other team. Even if he doesn’t seize the starting role, Hill should finish 2019 in far better shape than the 69th best running back -- his current ADP.

Continuing the trend, here’s another player who was injured last season and is subsequently being slept on headed into this season.

At the pinnacle of the Rams offensive powers during their historic 2018 season, schematically they were often led by a power running game and frequent pre-snap motion, however one could argue that the drive sustaining plays were typically run through their premium slot receiver, Cooper Kupp . Being that Kupp went down during the middle of the season, many have forgotten that Kupp was by far the Rams most effective receiver. Fleshing out his numbers into a full 16-game schedule, Kupp was on pace for 80 receptions for 1,132 yards, and 12 touchdowns. That would have been good enough for him to finish as the eighth best fantasy receiver in 2018. Headed into 2019, Kupp is on pace to be fully recovered from his injury, and with a complete roster and coaching staff return for the Rams, it makes almost no sense why Kupp would be projected to finish outside of the top-15 in terms of fantasy wide receivers. Unless the Rams overhaul their offensive scheme, Kupp will return to being the most important receiver on the team. He will outperform his preseason ADP. 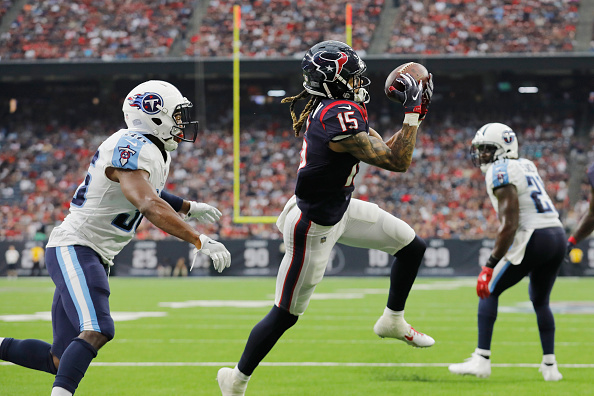 Because Will Fuller is so often injured, you probably didn’t realize that “Watson to Fuller” is the second most effective quarterback-receiver tandem in the NFL since 2006. When throwing Fuller’s way, Deshaun Watson has a 138.2 passer rating, while nearly 25% of Fuller’s receptions go for touchdowns. It is rarely responsible to assume that players are going to get injured headed into the season, so with these incredibly explosive numbers at hand, why is it that Fuller is being treated as a bench level fantasy receiver by most experts? It is a safe bet that with a clean bill of health, Fuller should finish 2019 as a reliable WR2 with even WR1 upside. He’s that talented and that productive when healthy.

Despite that the Cardinals were absolutely awful last season, quietly Christian Kirk had himself a solid rookie season. This season, he enters as the Cardinals most talented receiver and that is even with the presence of a future Hall of Famer in Larry Fitzgerald and after the addition of three rookie wideouts as well. Beyond that, where the excitement ramps up for Kirk is that reigning Heisman Trophy winner Kyler Murray and Air-Raid offensive enthusiast Kliff Kingsbury have arrived in town and are looking to fundamentally change the way the Cardinals run their offense. Don’t be surprised if the Cardinals become the most pass happy team in the league going forward, which should only mean more targets, space, and production for their most talented receiver in Kirk. He’s currently being drafted as the 37th wide receiver off the board, and while he was just a rookie only last season, that is borderline disrespectful.

While he’s just a rookie, and although he’s currently listed behind Geoff Swaim on the depth chart, Oliver qualifies as a sleeper here. First of all, you have to understand the the type of talent that he brings to the table… In college, the coaching staff at San José State had a package of plays called “FTS” or “Feed The Stud” implying that their design was to just get the ball in Oliver’s hands and let him make things happen. Subsequently, 68% of Oliver’s receptions went for first downs last season, which was good enough for second in the FBS. The second thing working in his favor is that Nick Foles – the tight end whisper – is now the quarterback who will be throwing him the football. Rather than finding an over complicated stat that represents how much Foles uses the tight end, understand this simple fact: In all the games that he has played in over the last two years, no one has thrown to the tight end more than Nick Foles . Oliver will be utilized, despite his depth chart standing, and he will certainly outperform his egregious ADP of the 51st tight end off the board.