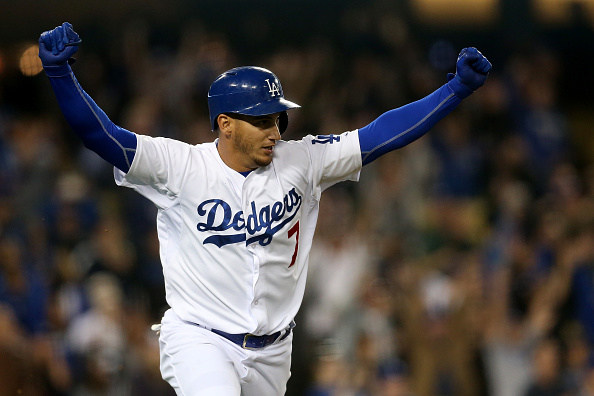 Each week I will hit you with the players moving up the rankings that you NEED to know about. I don’t care if it is the No. 8 hitter on the Rays or the No. 4 starter for the Astros. If they are producing, you’re gonna know about it.

With less than a week of action in the books making pickups this early in the season can be risky but the rewards could be endless. Below are the players that either need to be added immediately or need to be added to watch lists after a hot start. Just keep in mind, we are dealing with an extremely small sample sizes here folks, so don't be droppin' perennial fantasy studs who are starting off slow for a new up-in-coming name.

Alex Guerrero, 2B (LAD)--Either Guerrero has become the best pinch-hitter of all-time or the 28-year-old Cuban defector or there are some behind the scenes issues between him and management because there is no reason why he shouldn't be in the everyday lineup. Through 20 at-bats Guerrero is now slashing .474/..450/1.211 with four home runs and 12 RBI as he continues to be used solely as a reserve player. Granted, if he was to see regular at-bats his numbers would adjust more to the mean, but his power potential is certainly not something that is going away. After connecting on his fourth homer of the season Thursday manager Don Mattingly reiterated that he intends on using Guerrero as a reserve "for now," which is going to have to change if he keeps producing like he has. Clearly he does not have the glove of Juan Uribe at the hot corner, but how long can the Dodgers continue to deal with what little production he provides at the plate? As long as you are an owner that can deal with the sporadic at-bats until he gains a full-time role, now is the time to stake your claim before he really shows what he can do.

Adeiny Hechavarria, SS (MIA)--Quietly the Marlins full-time shortstop has been having himself a nice run as he has now logged six multi-hit games over his last 10 contests. Although he isn't known for his power stroke (18 career HR) he has been productive in all aspects of the game, slashing .311/.338/.410 with 10 RBI an 12 runs scored to this point. He has shown little over his short big league career that he will be able to sustain this pace, but this early in the season it could be time to give him a shot, even if the RBI production was to fall off down the line.

Will Middlebrooks, 3B (SD)--The move from the east coast to the west coast seems to have been the trick for this former Red Sox slugger as he continues to give the Padres the added power their lineup so desperately needed. He is now slashing .254/.288/.476 with three home runs and 11 RBI through his first 63 at-bats while having logged at least one hit in eight of his last 10 games. He has never been now for being able to support a high batting average, but his power thus far is certainly something he flashed in his time with the Red Sox. The biggest issue for Middlebrooks has been his inability to stay healthy, which has not been the case thus far, so those looking for help at the hot corner will want to give Middlebrooks a shot while he is swinging a hot bat.

Chris Young, OF (NYY)--After being pushed aside by a handful of big league squads, Young appears to have finally found a stable home where he will get to swing his big  bat on a regular basis. Through his first 42 at-bats Young is slashing .357/.426/.762 with four home runs and nine RBI as a member of the Yankees starting outfield on most occasions. He has been known for being a big strikeout player in his early years, but has just eight strikeouts in the early going which is far away better than any strikeout rate we have seen from him to date. At 31-years-old, Young is who he is. He is going to hit his fair share of home runs, especially at Yankee Stadium, and is good enough to be rostered in all but the shallowest of leagues until he proves otherwise.

Edinson Volquez, SP (KC)--Volquez may be headed to a suspension after his involvement in Thursday's brawl with the White Sox, but prior to that he has been dealing in his first season with the Royals. Through three starts Volquez is 2-1 with a 1.99 ERA, 0.75 WHIP and a solid 17:3 K:BB rate in 22.2 innings. In recent years Volquez has struggled immensely with his command,which has limited his long-term fantasy value although that appears to be changing are his hot start. Batters are currently hitting .177 against the Royals righty and unless he is Superman, that is going to adjust more to the mean as he logs more innings. Whether he can sustain his current rate is anyone's guess, but until he proves otherwise he is someone to target on the waiver wire this week.

Hector Santiago, SP (LAA)--Santiago has been far from great over the course of his young career, but appears to have turned the corner after a hot start to 2015. He is now sitting 2-1 with a 2.45 ERA, 1.04 WHIP and a 17:6 K:BB rate through three starts (18.1 IP) which is leaps and bounds better than anything he has shown in the past. Before getting carried away, lets remember that it is still April and a lot can change in the upcoming months, but he has been effective enough to warrant fantasy consideration regardless of the time length. For now those in deep leagues will wan to give him a look, but if his hot start continues he will be a must-own asset in no time.

Carlos Rodon, SP, RP (CWS)--Although his first big league appearance did not go as advertised, the White Sox prized prospect has made his way to the big leagues after a short minor league career. The White Sox don't want to rush him into the starting rotation before he isn't ready, so for now he is strictly to be used out of the bullpen until a spot opens up for him permanently. With the shaky start from John Danks in 2015 a spot could open up sooner rather than later even if his relief appearances don't go as planned. Those in deep leagues, especially dynasty formats will want to add him as soon as possible as his must-see slider will keep hitters guessing long-term.